WASHINGTON – President Donald Trump addressed a packed auditorium at the end of the second day of the 2019 HBCU Conference. He described his administration’s work on behalf of historically Black colleges and universities, praised Department of Education policies, and alluded to the upcoming election. 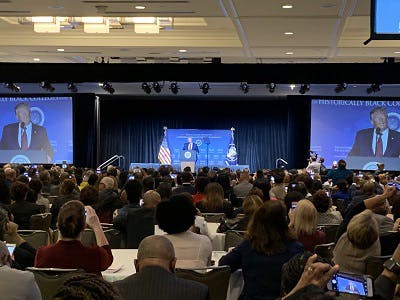 “For more than 180 years, HBCUs have strengthened our country and called our country to greatness,” Trump said. “Your institutions have been pillars of excellence in higher education and the engines of advancement for African-American citizens. It’s been incredible the job they’ve done.”

“Eddie Robinson won more games than anyone,” he interjected to cheers from the crowd. “Is that true? I think so.”

Trump went on to describe how he has “taken action to make HBCUs a top priority,” calling his administration’s “commitment” to HBCUs “bigger, better and stronger than any previous administration by far.”

He reminded the audience of his decision to move the Initiative back to the White House, instead of under the auspices of the Department of Education, where it’s been since George W. Bush was president.  He also mentioned raising federal funding for HBCUs by 13 percent, including Pell grants for summer classes in the federal budget, forgiving disaster loans for HBCUs hit by Hurricane Katrina and offering capital finance loan deferment to 13 HBCUs and loaning over $500 million to HBCUs.

The president went on to announce that 40 faith-based HBCUs will now have “equal access” to federal support for capital improvements because of a Department of Justice opinion that came out this week, declaring the restrictions “unconstitutional,” he said.

Trump also took the opportunity to praise some of U.S. Secretary of Education Betsy DeVos’s policies, including her pro-schools choice stance and her “unprecedented progress to reduce unnecessary regulatory burdens” so schools can “innovate and offer more flexible options.”

From there, the speech took a turn toward the election. Trump said his administration had to fix “many failures” of the past, like the loss of manufacturing jobs and “ruinous” trade policies. But his “America First agenda” is creating “national renewal,” he said, with an aside that immigration reforms are a part of that mission.

“The first and highest duty of government is to take care of its own citizens,” he said. “African-Americans built this nation through generations of blood, sweat, and tears. And you, like all of our citizens, are entitled to a government that puts your needs, your interests, and your families first.” 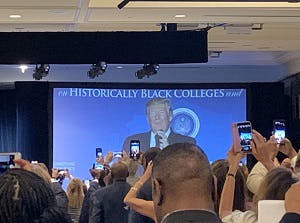 He shared that African-American unemployment hit an “all-time low” during his tenure.

“When I’m on that debate stage, those are pretty good numbers,” he said. “Who can beat those numbers?”

HBCU leaders and students had mixed reactions to Trump’s remarks.

Corvell Garrett – a senior at Wilberforce University and an HBCU Competitiveness Scholar – said he isn’t a fan of all of Trump’s policies but found the speech “impactful.” He was particularly struck by a moment when Trump pulled White House Opportunity and Revitalization Council Executive Director Scott Turner on stage.

Just to see a Black man speaking alongside the president was “very powerful,” Garrett said. “It shows that he does have some kind of heart for African Americans.”

Philander Smith College is one of the institutions benefitting from the capital finance program Trump mentioned in his speech.

But Smothers wants to know more about what’s to come for HBCUs in the remainder of Trump’s presidency.

“Our institutions still have great needs,” he said. “We have infrastructures that are falling apart. We need more funding to strengthen the capacity of our STEM initiatives … While I’m appreciative of what he’s done, I’m more excited about the potential of what he could do in the next 18 months that could have a lasting impact on our institutions.”

Smothers didn’t mind the president using the HBCU Conference to talk about next year’s election. That’s politics, he said, and the bottom line for him is Trump administration policies have helped his students.

“I can see the reality of that on my college campus every day,” Smothers said. “If [Trump] mentioning that helps him politically, I guess that’s alright. Because at the end of the day, the people I’ve been charged to serve are benefiting from that.”

Before Trump’s speech, the second day of the conference featured a variety of breakout sessions.

One explored a National Academy of Science report on how Minority Serving Institutions can help bolster the STEM workforce.

Dr. Leigh Miles Jackson, senior program officer at the National Academies of Sciences, said the report sought to answer key questions, like “What are examples of programs on MSI campuses that have exhibited strong evidence of success in producing quality STEM graduates? What are they key challenges facing these MSIs as they continue to produce STEM graduates?”

The report found that MSIs receive relatively little federal funding compared to the impact they have on social mobility for STEM graduates of color.

“There’s this sense of competitiveness that’s perhaps unnecessary,” said Artis. HBCUs are “a family of institutions with a shared mission.”