Like much of the nation, Julian Alexander Arriola-Hemmings had spent the past few months closely monitoring the two U.S. Senate races in Georgia.

A 2020 graduate of Morehouse College, Arriola-Hemmings, 22, remained hopeful that Jon Ossoff and the Reverend Dr. Raphael Warnock would ultimately be declared winners in Tuesday’s special runoff election and flip the U.S. Senate, placing control of the legislative body squarely in the hands of Democrats.

If that happened he said, progressive policies like criminal justice reform and Medicare for all, would take center stage in the national agenda. 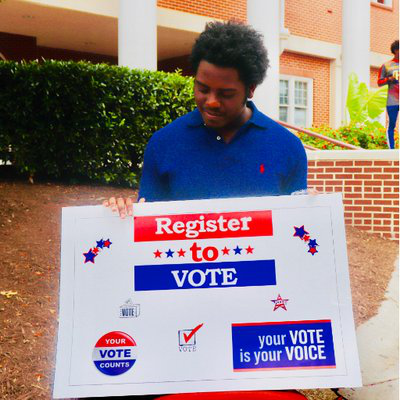 As of Wednesday morning, news outlets had called at least one of the elections, declaring Warnock the winner over incumbent Kelly Loeffler. Ossoff has maintained a small lead over Republican David Perdue.

Like Arriola-Hemmings, the 51-year-old Warnock is an alumnus of Morehouse and the pastor of Ebenezer Baptist Church, the venerable religious institution that Dr. Martin Luther King, Jr.—also a Morehouse alum—co-pastored alongside his father from 1960 until his assassination in 1968.

“Reverend Warnock is grounded in a tradition that has helped to develop the greatest leaders in our culture,” said Arriola-Hemmings, adding that as a southern preacher and a graduate of a historically Black college, Warnock personifies the social justice ministry and ideological teachings that shaped and galvanized the modern civil rights movement of the 1960s.

With millions of outside advertising dollars being poured into Georgia in the days leading up to Tuesday’s election, and an aggressive campaign to encourage early voting, Democrats had expressed earned optimism about the possibility of Ossoff and Warnock winning all the way up to the waning hours of the campaign.

For progressives like Arriola-Hemmings, Warnock’s win over Loeffler proved historic in the Peach state, which has traditionally leaned Republican until Joe Biden and Kamala Harris won the state in November’s presidential election, erasing what had been a steady and consistent effort to keep the state solidly red.

“The idea of electing the first Black man from Georgia to the U.S. Senate is awe-inspiring,” said Arriola-Hemmings, who has stumped for the candidate, adding that Warnock will be a “spiritual reformer,” who will “legislate based on the moral principles that he learned at Morehouse College, Union Theological Seminary and Ebenezer Baptist Church.” 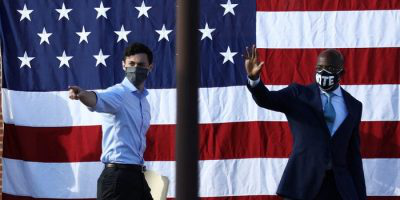 Arriola-Hemmings is a bit agnostic when it comes to Ossoff.

“Ossoff is status quo,” he said. “But status quo is much better than Perdue.”

In many ways, Tuesday’s double Senate race had become a referendum on trending national issues including COVID-19, police accountability and reform, the rising cost of a college education and Donald Trump.

Denise Myers, 20, was so passionate about the importance of galvanizing her peers that she took a semester off from college to canvas and set up voter registration drives to encourage young people in Savannah to cast a vote for Warnock and Ossoff.

“There was just too much at stake for us to be on the sidelines and to remain passive,” said Myers, who was thrust into activism this summer after learning about the brutal killing of George Floyd and the rising coronavirus cases throughout Georgia. “The least I could do was to exercise my right to vote and to encourage others to become engaged in the political process. Win or lose, I couldn’t do nothing. That was not an option for me.”

In a speech to his supporters early Wednesday morning, Warnock struck a celebratory tone.

“We were told that we couldn’t win this election, but tonight, we proved that with hope, hard work, and the people by our side, anything is possible,” he said. “So Georgia, I am honored by the faith that you have shown in me. And I promise you this tonight: I am going to the Senate to work for all of Georgia.”