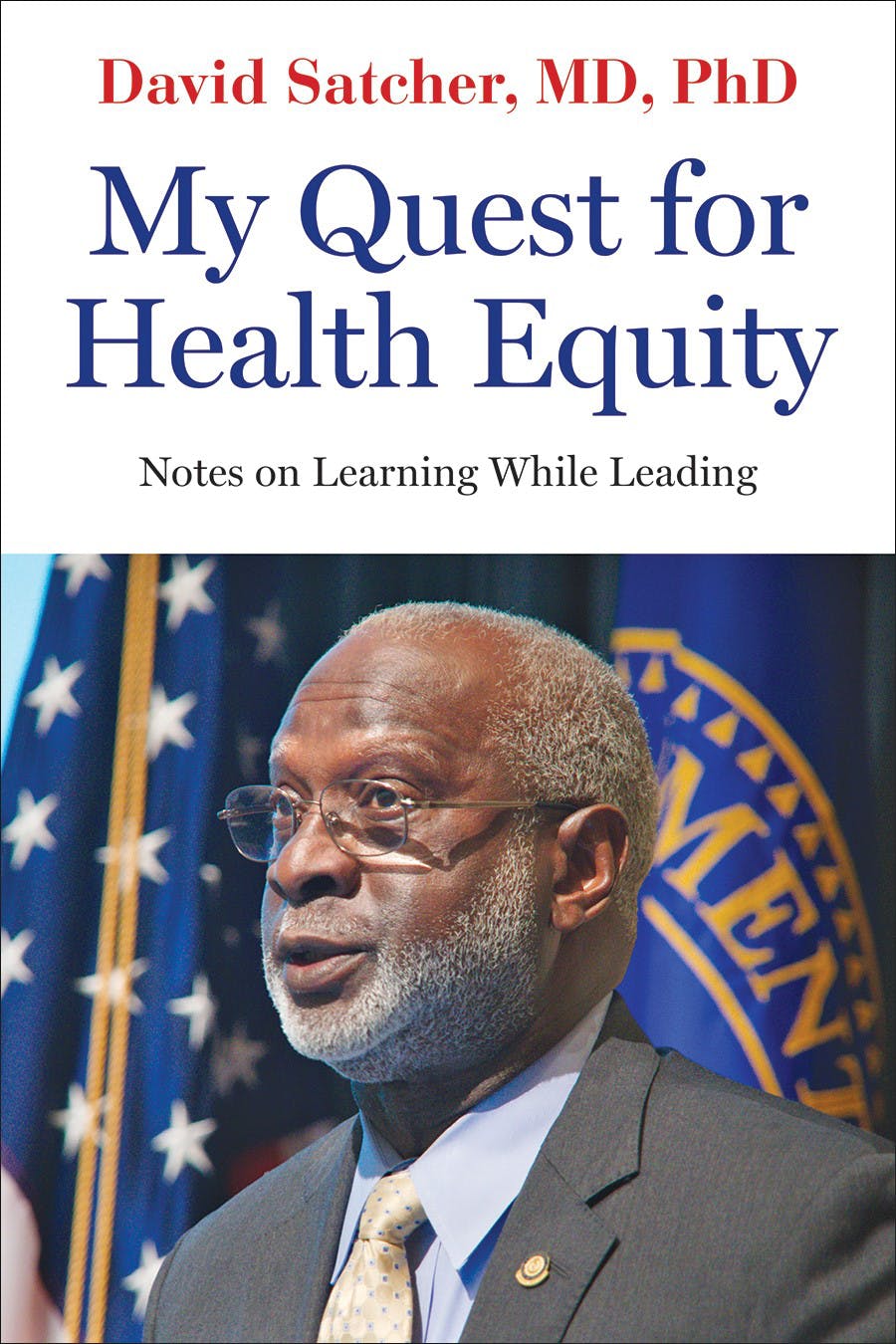 My Quest for Health Equity: Notes on Learning While Leading is part memoir.

A two-year-old David Satcher lay gravely ill with whooping cough and pneumonia. He should have been in a hospital, but he was born in Anniston, Alabama, in 1941. There, like elsewhere across the Deep South, hospitals didn’t admit Black people. It was a pernicious practice of the day that also characterized much of the nation’s history of racism and inequity.

That’s why Satcher’s father summoned Dr. Fred Jackson, Anniston’s only Black physician. He came to the family’s farm and tended to his young patient all day. But as he left that evening, Dr. Jackson delivered the same crushing warning that Black parents back then knew well. Without hospital care, your sick, Black child will likely die at home.

But Satcher’s parents, self-taught farmers and faithful Sunday school leaders, were determined not to bury a third child. They followed the doctor’s orders, and his mother even “breathed” for her nearly breathless son — so go the stories of his crisis and survival that David Satcher said he heard over and over growing up.

The doctor died when Satcher was five years old, but that didn’t stop a little Black boy whose parents didn’t finish elementary school from “telling everyone I was going to be a doctor, just like Dr. Jackson,” he recalls.

Today, at 79,  Satcher has accomplished that and so much more as one of the nation’s preeminent physicians, a respected civil rights leader and scholar, and a pioneering public health administrator. For Satcher, the past — being Black, poor and sick in the racially segregated south — was his introduction to unequal treatment. It was also his spark. And it is ever present.

“That’s why the issue of disparities in health is very personal for me. I lived that. I lived through them,” Satcher told Diverse in an interview conducted late last year about his new book, My Quest for Health Equity: Notes on Learning While Leading, which is part memoir and an instructive look inside a legendary career that spans more than five decades.

After graduating from the Calhoun County Training School outside of Anniston, Satcher enrolled at Morehouse College, the historically Black all-male college in Atlanta and alma mater of Martin Luther King, Jr. For Satcher, being on that campus amid the turbulent times of the late 1950s and early 1960s was transformative.

“As a student at Morehouse, I moved from being a victim of racism to having an opportunity to confront racism and segregation,” he writes in the book. On the campus is where his leadership takes root. And years later, Morehouse  served as a bridge to his future.

Confronting health inequities from the top

After serving for nearly 12 years as president of the historically Black Meharry Medical College in Nashville, Tennessee, Satcher had a chance to confront the country’s health inequities from a national post when President Bill Clinton picked him to lead the Centers for Disease Control and Prevention (CDC). He served from 1993 to 1998 and was the first African American to hold the post. 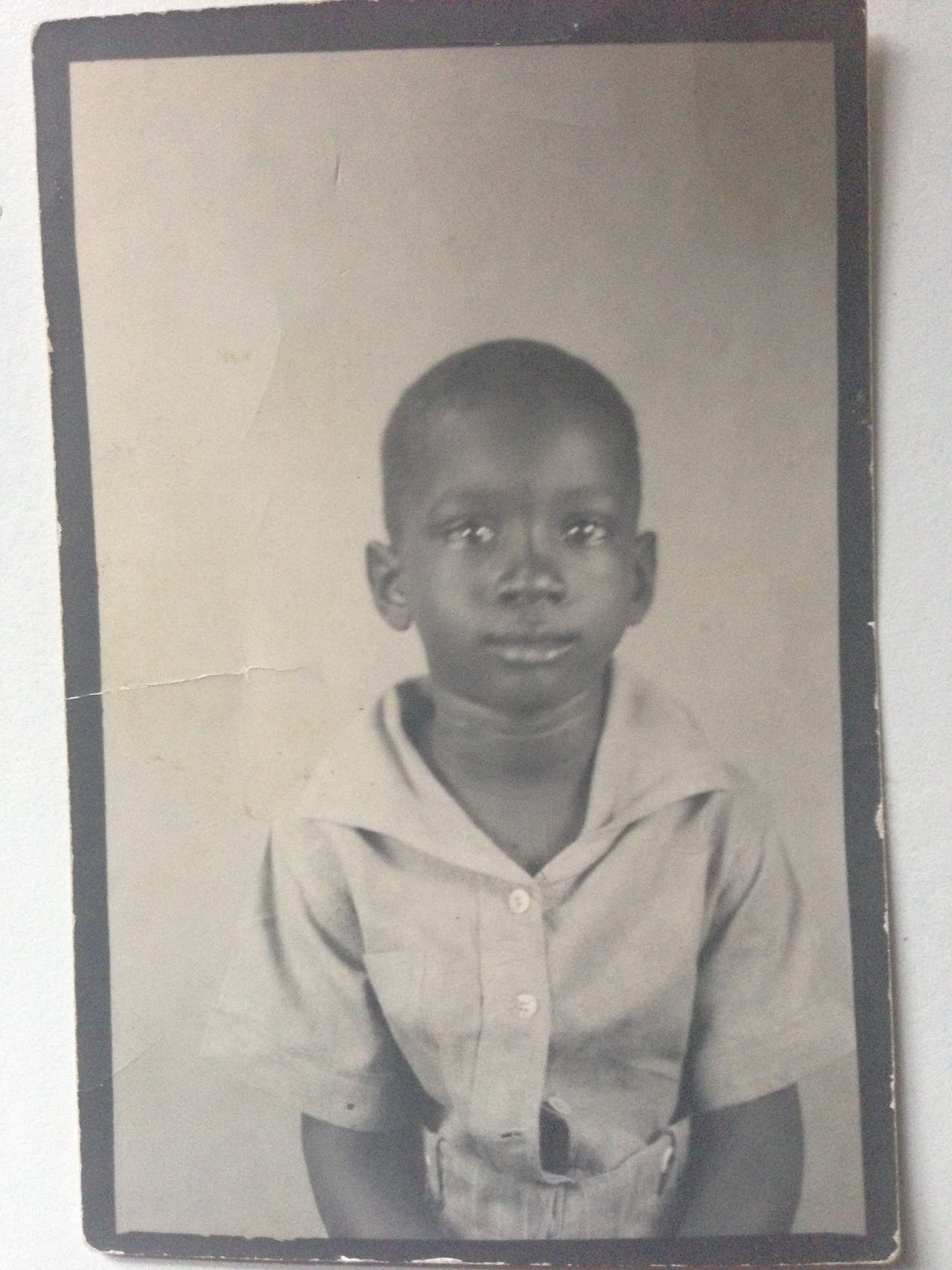 Even in elementary school, 6-year-old David Satcher knew then that he wanted to be a doctor.

Satcher was then appointed U.S. Surgeon General, serving out a four-year term that began in 1998 under President Bill Clinton and ended under President George W. Bush. At the same time, Satcher served as the assistant secretary for health at the U.S. Department of Health and Human Services from 1998 to 2001, making him only the second person in U.S. history to have held both positions simultaneously.

In these top governmental posts, and throughout his career, Satcher has tackled many of the major problems that threaten human health and wellness, like      access to immunizations, HIV/AIDS, oral and mental health, smoking, obesity, polio and Alzheimer’s disease.

At nearly 80, he has retired from public service and “technically,” he says, from Morehouse School of Medicine. But he hasn’t stopped preaching and promoting the need for health equality, especially during the COVID-19 pandemic, which has taken an outsized toll on Black and Brown people.

He continues to teach at MSM, where he founded the Satcher Health Leadership Institute in 2006. As the institute’s advisor, Satcher says he continues to focus on cultivating diverse leaders who can develop and influence health care policy, become community health leaders and tackle the kind of racial disparities in health that he says made Anniston’s Dr. Jackson “a victim” and “put his life at risk” as a sick, Black child in segregated Alabama.

In the following interview, Dr. Satcher speaks about his new book “My Quest for Health Equity,” the pandemic, Black medical schools, leadership failure, what motivates him to lead, and more. These are some takeaways. Questions and answers have been edited for length and clarity.

On racial health disparities that already existed in the U.S. and COVID’s impact:

SATCHER: Health disparities affected the severity of the COVID-19 infection. They are the reason that more Black and Hispanic people are more likely to die and be hospitalized with the virus than White people. We must be more serious about eliminating health disparities. If we don’t, when the next pandemic comes, it will take the same toll.

What it will take to eliminate racial health disparities:

SATCHER: The country needs to make a real and long-term commitment. President Obama was on the right track with the Affordable Care Act. If it had been allowed to stay in place as intended, I think we would have been further along in eliminating disparities in health. But as you know, the Senate has tried to get rid of it, even for those with pre-existing conditions. One thing that bothers me about this country is how hard it is to sustain efforts. It shouldn’t depend on who is president or in Congress.

What makes him hopeful about the emerging leaders in training at the Satcher Health Leadership Institute:

SATCHER: I’m hopeful because of their commitment and the work that many of them are doing after they leave us. Our mission and goal is that until we achieve health equity, as leaders, we must continue to fight health disparities wherever we are in the world.

The qualities a potential or effective leader should possess:

Early advice that shaped his brand of leadership:

SATCHER: I do not think any advice has been more important to me than that sage advice from [my father,] Wilmer Satcher, who was wise in so many ways, and … a great father, a great man and a great leader. I learned from him that leaders must treat other people with respect. It is not only right but also empowering to both parties, and it enriches the environment. 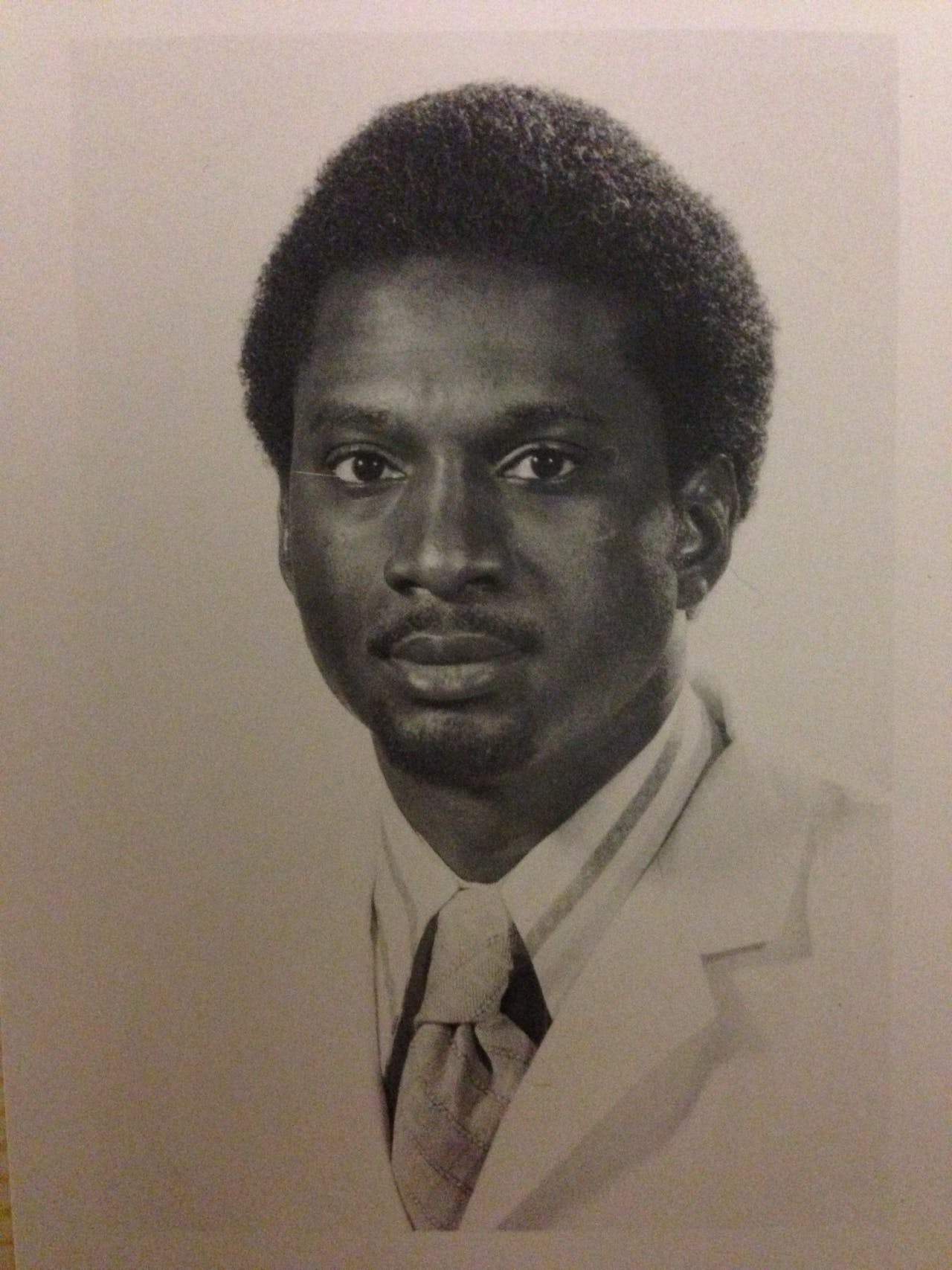 SATCHER: He spoke in chapel every Tuesday morning, and we sat on the edge of our seats as he challenged us to ‘aim for the stars, and not the ceilings of your lives.’ Martin Luther King, Jr. heard that message when he was a Morehouse student in the late 1940s, and I heard it as a student in the early 1960s. This is my favorite Benjamin Elijah Mays quote that I have carried with me throughout my life and work: It must be borne in mind that the tragedy of life doesn’t lie in not reaching your goal. The tragedy lies in having no goal to reach. It isn’t a calamity to die with dreams unfulfilled, but it is a calamity not to dream. It is not a disaster to be unable to capture your ideal, but it is a disaster to have no ideal to capture. It is not a disgrace not to reach the stars, but it is a disgrace to have no stars to reach for. Not failure, but low aim is sin.’

The critical leadership and career opportunities that “found him,” and why he said yes:

SATCHER: Believe it or not, I didn’t seek many of the top positions that I’ve had. In many instances, organizations and institutions were in crisis when they called me. But if I think that something is worth doing, the way that I did when I accepted positions at Meharry Medical College and Morehouse School of Medicine, and when I feel that I can contribute to something worthwhile, I find myself saying yes.

How the nation’s leadership impacted the COVID-19 pandemic response and the role of science:

SATCHER: As a former head of the CDC, not only have I thought about these issues a lot, I’ve been speaking out often about them. I think the real problem starts with the office of the president. Obviously, there is a lot of blame to go around when it comes to Trump and the way that he has acted as president. But I don’t waste a lot of time blaming him. I know, however, that it is difficult to work for somebody who does not respect science or scientists. [Trump] seems most interested in politics and money. What America needs now is a leader who really cares about people.

At the same time, that doesn’t mean that I excuse the leadership at the CDC. Sometimes, even if it means that you will be fired, there are some things that you won’t do. I’ve tried to be supportive of Dr. (Robert) Redfield, but if I had been in his position and had to work with a president like Trump, I would have disagreed with him publicly, just like Dr. (Anthony) Fauci has done. I would have upheld the history of the CDC and all that it has stood for, so that no one would have to question the viability of what was being said. I and former CDC directors wrote an opinion piece in The Washington Post that spoke to these issues.

On the changing need for Black medical schools:

SATCHER: That’s a very important question. I don’t necessarily think that we need Black medical schools the way we needed Meharry, the way we needed Howard and the others in the past. Today, they don’t exist the same way. They are predominantly Black and are committed to training physicians who can go into communities where they are most needed. A lot of students go to Meharry, for instance, because of its history, but then there are a lot of Black students who attend medical schools that aren’t predominantly Black. And many of them will also graduate and go out into underserved communities.

Why now was the right time to tell his story and write My Quest for Health Equity:

SATCHER: My wife Nola had Alzheimer’s disease for almost 20 years before she died in June 2019. But it was in the last five years of her life that I started writing this book. She was unable to effectively communicate with me or anyone else at that point. So, I decided to pull together parts of my life. It was a tough time. I can’t pretend that it wasn’t, but starting to write helped me to get through it. As you can see, I dedicate the book to her.