As an eleventh-grader at Crane High School in Chicago, Dr. Carol D. Lee faced the same wall of disrespect so many African Americans have experienced. The students were preparing to take the ACT and Lee asked questions about the application process. Nearly 60 years later, she vividly remembers her teacher telling her, “It doesn’t matter because you won’t pass anyway.”

Not only did Lee receive a high score, but she received college scholarship offers. That teacher’s dismissive comment, along with other slights by educators, helped shape her current views on education and research. Lee considers her five decades of involvement in independent, community-based, African-centered elementary schools the most important part of her 54-year career.

Lee, along with her husband, renowned poet and publisher Haki Madhubuti, and activist Soyini Walton, started three African-centered schools in Chicago in the early 1970s. “We were always inventing ways of trying to incorporate a strong sense of identity and self-pride among our young people,” Lee says, explaining that the courses, including math, were developed using African-centered principles. “We’ve been doing this work for over half a century and these institutions that we founded are still in operation.” 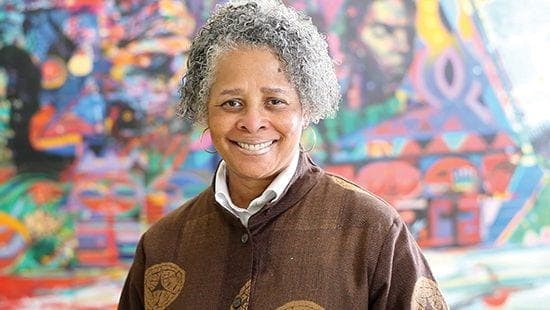 Dr. Carol D. LeeLee is now professor emerita at Northwestern University in the School of Education and Social Policy and in African-American studies. Much of her research examines the role of culture in teaching and learning and the role of culture in academic literacies. “The work that I do as a researcher focuses on trying to understand how people learn,” Lee explains via Zoom from her suburban Chicago home, surrounded by jammed bookshelves and African American art. “One of the things that is foundational to understanding how human beings learn is understanding the role of their participation in cultural practices, the ways in which people identify themselves, and the nature of social relationships they have with each other.”

Before entering graduate school, Lee and the other activists started an elementary school venture called New Concept as a Saturday project that grew into three full-time schools that are still operating today. Two of them are charter schools under the umbrella of Betty Shabazz International Charter Schools which enroll between 550 and 600 K-8 students and where Lee serves as chair of the board of directors.

“As we came to understand our history as a people, we felt that a baton was being passed to us and we made the decision to pick it up,” she recalls, describing the New Concept founders’ decision to venture into educating Black children.

Lee contends that her studies and research have determined that “race is a social and political construct created by an ideology of White supremacy to achieve certain political and economic gains. It is not a social reality. We are not defined by the amount of melanin in our skin; we are defined by a set of practices that get passed on from one generation to the next.”

Lee believes that as an African American scholar and social activist, it is important to participate — and have leadership roles — in the most prestigious organizations and academies in the country. She is president-elect of the National Academy of Education, a member of the American Academy of Arts and Sciences and past president of the American Educational Research Association, among others.

“All of my work as a researcher is built on the foundation of the work that we did with New Concept School,” Lee says. “There has always been a direct relation between the nature of my scholarship as an education researcher and the work we have done in the community building these institutions.”

She also considers her current position as president-elect of the National Academy of Education and chair of its Committee on Civic Reasoning and Discourse a significant milestone in her career, in part because of the Academy’s recent report, “Educating for Civic Reasoning and Discourse.” Lee and the other co-authors write in the introduction, “It is important that youth are prepared to engage in civic reasoning and discourse in ways that value complexity and avoid simplistic answers to complex social issues.” In these times of uncivil, often hostile, public discourse, the report hopes to serve as a much-needed guide for today’s educators.

Lee has been honored with numerous commendations and awards, most recently the prestigious 2021 Harold W. McGraw, Jr. Prize in Education, a $50,000 award which “recognizes individuals and their efforts to elevate human potential in education.” Also this year, Lee received the AERA award for Distinguished Contributions to Research in Education and the James R. Squire Award from the National Council of Teachers of English.

Lee speaks often of her family and its connections to her academic and community work. “For my master’s degree I was working on the poets of the Black arts movement,” Lee recalls, “and I was teaching in a summer school program that had invited a poet who was then known as Don L. Lee to speak and it turned out that I had been writing about him in my dissertation, and that’s how we met.” They later married and are the parents of three children. Don L. Lee, who changed his name to Haki Madhubuti, went on to teach at several universities, including Chicago State, Howard, Cornell and DePaul, and to establish the Chicago-based Third World Press, the largest, independent Black-owned press in the United States.

‘Your own private hell’

When asked about her advice to young scholars embarking on careers in academia, Lee notes that she was one of the co-founders of a mentoring program for scholars of color in the National Conference of Teachers of English, called Cultivating New Voices. “I always tell students the process of producing a dissertation is going to be a descent into your own private hell, but it has to be a hell that you want to occupy. It has to be about work that you really love.”

Lee advises her mentees and young colleagues, “Keep in mind if you’re doing work that you love in a way that is comprehensive, rigorous and thoughtful, there will be a home for you, but also understand it’s a job; it is not your life. It does not define who you are or what your worth is. Too many young people come in with the notion that somehow they have to be validated by the academy or by their institution or department.” Lee also argues that academics who engage in social movements should be supported rather than discouraged.

“I don’t see a tension between scholarship and trying to do good in the world,” Lee asserts. “I don’t see scholarship and activism as being separate. That doesn’t mean everybody has to do it but those who feel that there is a social good or function that can be accomplished through their scholarship — that is perfectly legitimate.”

Lee views current controversies related to teaching about race as revivals of old debates. “There’s nothing new in this discussion of critical race theory,” she suggests, adding that there has been “an ongoing dance around race” throughout the nation’s history. “These are long-standing, persistent underlying challenges in the country.”