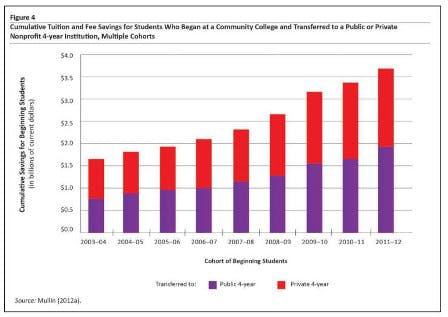 Instead of opting for admissions into some of the nation’s most prestigious and respected four-year institutions, many students have chosen community colleges in order to market themselves as competitive and qualified job candidates.

Although the economy has slowly begun to piece itself back together, several new college graduates and incoming college students still have found themselves at a disadvantage in finding employment while holding liberal arts degrees, and thus, have continued to incorporate graduate school as a stepping-stone to either enter or elevate their career pursuits. Yet, instead of opting for admissions into some of the nation’s most prestigious and respected four-year institutions, many students have chosen community colleges in order to market themselves as competitive and qualified job candidates.

Traditionally attributed with their prevalent role in accommodating minorities and students from lower-income households, community colleges have become esteemed higher education programs within the last five years, servicing students from various backgrounds. With the community-oriented design of the two-year colleges, particularly in their tailored curriculum to accommodate the high demands of STEM careers, such institutions are reinventing themselves as the leaders of technological education.

“A lot of the STEM fields are occupationally defined programs that lead directly to employment. With many of our two-year associate programs, students enter our colleges and immediately begin studying in the field that they plan to work in,” said Chris Mullins, program director for policy analysis with the American Association of Community Colleges (AACC).

The customized studies that students encountered at community colleges has attributed largely to the surge of post-graduate students that the two-year institutions have begun to withhold. According to the National Post Secondary Student Aid Study (NPSAS), 8 percent of students entering community college already completed some form of higher education, whether they received a bachelor’s, master’s or sometimes even a doctoral degree. In the study, NSPAS estimated that approximately 849,000 students received associate degrees during the 2009-2010 academic year, which is a 50.4 percent increase from the last 10 years. Among the rising numbers of associate degrees awarded, there was a 105 percent increase in STEM-related fields during the same academic period.

Mullins explained that a large majority of students seeking advanced training in STEM careers have found community colleges advantageous, especially in the networks that they have gained from the school’s direct links to local employers. “By having connections within local industries, it helps to make sure our programs are in line with employer expectations, especially since education is a large part of employment,” Mullins said.

Not only have community colleges been strategic for career placement in STEM fields, but the economical advantage of the associate degree programs in comparison to the baccalaureate programs have reverberated as strong selling points for many students. The low costs of community colleges, averaging around $3,000, compared to the $7,000 admission cost of four-institutions, have allowed many students from low-income and middle-class families the opportunity to partake in higher education in STEM fields, according to data from NSPAS. In addition to saving on tuition fees, students in STEM fields with an associate degree received similar salaries to those with a bachelor’s degree. The Bureau of Labor and Statistics estimated that an entry-level aerospace engineer holding an associate degree was liable to make an average income of $58,000 in 2010, which in some cases ranked well over the entry-level salaries of graduates holding a bachelor’s degree.

As community colleges have assuaged the financial barriers for students interested in pursuing STEM careers by offering lower tuition rates and higher salaries, the institutions have created a strong incentive for students to study STEM subject areas. As a result, the institutions have contributed to the nation’s interest of creating a competitive technical education and workforce. Celeste Carter, lead program director for the National Science Foundation (NSF), explained that the nationwide initiative of higher education in creating a globally competitive education system relies heavily on creating easier and more accessible pathways into STEM fields. For this particular reason, both the NSF and the AACC have joined forces to develop technological programs that cater to community colleges. Their main program, entitled Advanced Technological Education, is a congressionally mandated program that looks specifically at community colleges to create partnerships between scientific and technologically based companies and institutions.

“The idea being that to remain globally competitive, the United States needs a qualified group of candidates entering the technical workforce. ATE (Advanced Technological Education) is about technician education; it has to be done in partnership with industries,” Carter said.

In regard to the education program, Carter elaborated, “It provided students with programs that have been developed, almost all the time, a collaboration with the scientific industry so that students graduating either with an associate degree, or oftentimes just a certificate, have a real pathway into these technical fields.”

According to Carter, many community colleges tend to hire industry experts to teach as adjunct professors. As a result, the education that students at such institutions receive is reflective of the authentic demands in rigorous STEM fields.

“The main mission of community colleges has always been centered around teaching, particularly teaching students what job skills are needed within their communities. So, having these industry experts provides students with a window into the industry, while also allowing those already employed students to refresh their skills within the industry” Carter noted.

While community colleges, because of their economical benefits and industry-specific curriculum, have acquired the responsibility of operating as leading institutions for technological education, these schools also face several challenges in serving STEM education. Historically, the two-year institutions have always been underfunded, and thus, have been unable to adequately support the enrollment growth that they tend to encourage. According to Walter G. Bumphus, president and CEO of AACC, the financial disposition of many of the institutions has inhibited the developmental education of community colleges as dysfunctional. Bumphus said, “Degree and certificate completion rates are too low and that attainment gaps across groups of students are unacceptably wide.”

Bumphus further explained, “[Community college leaders] know that student and academic support services often are inadequate. They know that student career planning is too often uninformed and that the gap between the skills needed locally and the training offered on campus is often uncomfortably large.”

As a result, Bumphus recommended that community colleges focus on three areas in order to progressively move forward as leading technological institutions. First, community colleges should redesign the student’s educational experience. This can be accomplished by “increasing completion rates of students earning community college credentials [certificates and associate degrees] by 50 percent by 2020, while preserving access, enhancing quality and eradicating attainment gaps associated with income, race, ethnicity and gender,” noted Bumphus.

Secondly, Bumphus recommended that the institutional role should be reinvented by increasing college readiness and implementing preparatory technological education programs at younger education levels. His third and final recommendation for community colleges was to completely reset the system level of the institutions. Community colleges should begin to target public and private investors as a mechanism to increase financial support, which is a common practice among the administration of four-year institutions. In resurfacing and almost erasing the faulty system of two-year institutions, administration can begin to evaluate the deficiencies and continue to create effective policies for a school that prepares students for jobs with family-supporting wages.

Bumphus predicts that by recognizing the challenges, and also the opportunity at stake in creating a more globally competitive technical education system and economic system, community colleges can reclaim its role as an effective institution serving the local population.