Young Stands Out Among Miami Dade College Class of 2013 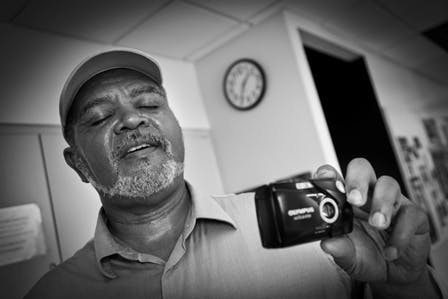 Milton Young was diagnosed with advanced open-angled glaucoma nearly five years ago. He learned to read Braille at the Lighthouse for the Blind and now uses apps from his iPhone to help him study.

MIAMI — Milton Young could have been a graduate of the “School of Hard Knocks.” His father abandoned his family when he was a young boy. He gave up his academic dreams to work and help pay for his siblings’ schooling. Years later, he lost his loving wife to an aneurysm six days after giving birth to their third child.

But Young’s story has a happy middle.

This spring, Young will graduate with a computer engineering degree from Miami Dade College (MDC) and a 3.93 grade point average, to boot. What makes his story stand out? Young is 61 years old and blind.

Young was diagnosed with advanced open-angled glaucoma nearly five years ago. He can’t see from his right eye and can only make out gray and cloudy images from his left eye. He learned to read Braille at the Lighthouse for the Blind and now uses apps from his iPhone to help him study.

“Some people become reclusive [when they lose their eyesight]” he said. “But this class was my signature for coming back.”

Young is referring to his Introduction to Photography course. The College’s ACCESS Program (A Comprehensive Center for Exceptional Student Services) encouraged him to sign up. Although scared to fail, Milton obliged. His professor, Tony Chirinos, equipped him with a point-and-shoot camera, and put him to work.

“He helped the rest of the students become better photographers with good, healthy competition,” Chirinos said.

Today, Young still takes his Olympus wherever he goes. His signature image is his cane. “I want everyone to know what my struggles are,” he admitted.

Young plans to pursue a career in psychology. He wants to incorporate this new-found hobby into his practice, in a term he cleverly coined as “psycho-photography.”

“I believe it’s going to make a difference in someone’s life,” he said.

Never remarrying, Milton, who grew up in a “rough neighborhood” in Philadelphia’s inner city, raised his three children and put them through college. Next month, when he walks across the platform to receive his diploma, Young will have reached a monumental milestone.

Some of his classmates, who refer to him as “Pops,” will walk alongside him and get their diplomas. His three kids will also be there to cheer him on. Among them will be one of his daughters, who is a part-time photographer, with her camera in hand.