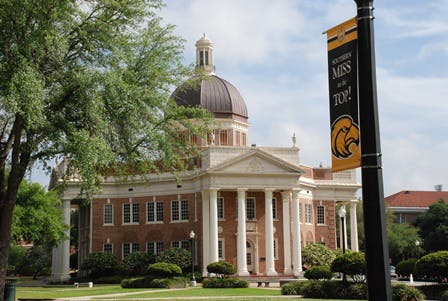 University of Southern Mississippi is one of eight public universities where enrollment declined.

Figures released by the College Board on Monday show the preliminary fall student count at the schools is down 0.6 percent to 80,532 students.

College and university enrollment is usually counter-cyclical to the economy, rising when the job market is bad and falling when it’s better. But officials say tightened rules on federal financial aid for poor students and reductions in federal funding for graduate students are also cutting enrollment.

“While the decrease system-wide is small, it does demonstrate that the changes in the Pell Grant program are having an impact on the decisions students are making,” Higher Education Commissioner Hank Bounds said in a statement.

The College Board has pushed Mississippi’s universities to recruit more students to offset state budget cuts, allowing them to lower tuition rates for many out-of-state students under a recent state law. That law was aimed at bolstering revenue, particularly at the state’s smaller universities.

USM officials told the Hattiesburg American that the drop of more than 1,000 students there was in part intentional, caused by restricting late enrollment. President Rodney Bennett said the school required students to enroll by Aug. 30 instead of letting them enroll as late as the 10th day of classes. Bennett said that late-arriving students tended to be more poorly prepared and were more likely to drop out.

“You have to put in some measures that initially represent a slight dip in enrollment to get better quality students who are on track to graduate,” Bennett said.

Mississippi Valley State, which has struggled to keep up enrollment numbers in recent years, saw an even bigger percentage drop than USM, losing 8.1 percent of students, or 200 altogether. College Board leaders are currently looking for a new president for Valley in hopes of reversing the trend.

Jackson State, though, is in a growth mode, with the number of students rising to a record of 9,134. JSU has been opening branch campuses and signing agreements with community colleges meant to feed more students to Mississippi’s largest historically black university. For example, nearly 400 students are enrolled in evening classes at JSU’s Madison campus, a more than 315-student increase for the whole university.

The University of Mississippi also set a record enrollment, led by 7.4 percent growth on the Oxford campus. Ole Miss officials said that the school’s freshman class grew and that the school successfully returned 85.5 percent of last year’s freshmen this fall.

At Mississippi State, the number of freshmen grew, but graduate enrollment dipped.