Community College Grapples With Ways to Help Students Without Housing 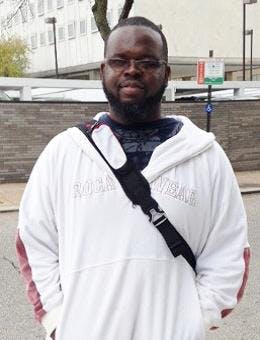 By attending Community College of Philadelphia, Quaris Carter is trying to break out of his cycle of poverty and chronic homelessness.Quaris Carter, now 37, moved to Philadelphia from Houston in 2010, believing he could find work as an electrician. When that didn’t work out, he wound up living on the streets. He enrolled at Community College of Philadelphia (CCP) in 2012, using $30 he earned for giving blood to pay the application fee.

Carter, who is entering his third semester at the college, said he could think of no other way to break out of the poverty and chronic homelessness that has been his lot for the past three years.

“If this doesn’t work, I just don’t know of any other way,” said Carter.

People aren’t surprised to see homeless people huddled for warmth on steam grates or panhandling on street corners. Most people don’t expect to see homeless individuals sitting in college classrooms with books open and pens poised. Yet a growing number of college undergraduates are pursuing their degrees without the assurance they will have a roof over their heads.

According to data from Free Application for Federal Student Aid (FAFSA), 58,000 applicants nationwide self-identified as homeless in the 2013-2014 academic year, up from 33,000 students in the 2010-2011 academic year. Since colleges are not required to keep track of their homeless students, the FAFSA form is the only significant data available.

However, the FAFSA numbers do not reveal how widespread the problem is and do not cover all the students who might be homeless, said Barbara Duffield, policy director at the National Association for the Education of Homeless Children and Youth (NAEHCY).

That’s “just the tip of the iceberg,” said Duffield, whose organization focuses on the educational needs of the homeless, because many homeless students don’t want to identify themselves and others don’t know about some of the financial aid available to them.

A perfect storm created by a weak economy, a shortage of affordable housing, rising college costs and insufficient financial aid is creating the situation, Duffield said.

“It is a hidden problem,” Duffield said. “There’s an assumption that, if you’re homeless, how can you think of going to college? But these students know that a college degree will help them get out of their situation.”

Homelessness is believed to be more prevalent among the 11.7 million students attending community colleges because they are more vulnerable financially. Some 29 percent of community college students have household incomes less than $20,000, the American Association of Community Colleges reported in 2011, and 35 percent of those students are also parents trying to make ends meet.

The fact that community colleges typically do not provide student housing leaves some students with no place to live. At a four-year college, students who qualified for financial aid would probably also have housing costs covered but might also be homeless during breaks throughout the school year and for summers.

Many young adults are at high risk for homelessness, especially those emerging from foster care or those asked to leave home by a parent or guardian. They face unique, additional challenges to securing stable housing, such as lack of a rental history, skeptical landlords and lack of savings for a security deposit or an adult to act as a guarantor.

Despite challenges, more of such youth are in college, aided in part by federal Chafee grants of up to $5,000 a year. An estimated 14,000 CCP students out of an enrollment of 35,000 qualify for zero family contribution when applying for federal financial aid, a measure that places them at or below poverty guidelines.

Overall, 60 percent of CCP students rely on Pell Grant funding to pay for their education. Even more are believed to be eligible but have not applied, either because they don’t know it is available or they lack the documentation necessary to complete the application.

“Given the growing financial needs of our student population and the increasing number of hurdles they face to getting into college and staying in college, we want to maximize the benefits that students can receive at state and federal levels,” said Samuel Hirsch, Ph.D., CCP’s vice president of student affairs. “We want to give them whatever they need to break this vicious cycle of poverty so they can achieve some economic stability.”

Carter is on track to receive an associate degree in criminal justice in spring 2014 and wants to start a career as a corrections officer or a paralegal.

He lives on roughly $7,000 a year that he receives from the federal Pell Grant and student Work Study programs. His meager income makes his housing situation very tenuous. Utilities can be shut off, landlords can evict roomers without notice, and when the worst happens finding a bed in a shelter is not always a given.

“So, my living situation is subject to change at a moment’s notice,” he said.

For this reason, Carter keeps most of his meager possessions—including his books and computer—in two lockers at CCP’s main campus. He has to do all of his studying on campus, where he spends most of his waking moments.

Hunger often goes hand in hand with homelessness, so Carter is one of 25 participants in a pilot Homeless Student Support Project administered by the CCP’s Women’s Outreach and Advocacy Center. In addition to a monthly food stipend of $75 for the school term for use in the college cafeteria, participants—men and women—receive free workshops and seminars on financial management, academic support services, housing assistance, career planning and development. Other benefits include a $50 supermarket gift card at Thanksgiving and a gift card to shop for work clothing once they complete the career-planning workshops.

The purpose of the Women’s Outreach and Advocacy Center project for homeless students is to alleviate some of the problems that could cause a student to drop out of college.

“This is very much a student-retention program,” said Claudia Curry, Ed.D., founding director of the Outreach Center. “I have a student in the program right now who comes here and showers in the gym because there are no bathing facilities where he stays. Another student brings all his belongings to campus in a rolling suitcase because he has nowhere to stay.”

Students like these are also benefiting from another initiative. Last fall, CCP became the 18th community college to open a Single Stop USA site to serve its students.

Single Stop, a national nonprofit, forged a partnership with the Association of Community College Trustees, a nonprofit organization of governing boards of community colleges in the United States, in 2009. The purpose was to redefine how participating institutions deliver student-support services. Each Single Stop site connects students to federal benefits, tax credits and other resources that supplement their income.

Nationally, Single Stop screened more than 18,000 students for benefits in 2012. It said a little more than 29 percent of those students received additional cash and non-cash benefits with an annual value of $5,400.

So far, Single Stop is operating at 18 colleges in seven states, forming systemwide partnerships with several of the nation’s largest community college systems, including the City University of New York (CUNY), Miami Dade College and the City College of San Francisco.

Single Stop is just one of the alternatives that community colleges are adopting to meet the needs of economically vulnerable students.

MCTC President Phillip L. Davis disputes that number, citing a report by the Amherst H. Wilder Foundation, a nonprofit social services organization that was formed in 1906, that counted about 2,500 homeless adults, ages 18 to 54, living in Hennepin County in 2012. MCTC doesn’t yet have its own figure but is working with several partners to provide a broader spectrum of nonacademic support for students who are homeless or precariously housed, Davis said.

“We’ve always had economically distressed students,” he said. “Now, those numbers are growing, and faculty say the distress is more acute.”

Currently, 80 percent of the students who come through MCTC’s four-year-old Resource and Referral Services Center are seeking help with housing issues. It serves as a referral service to community housing and legal services.

Those in need also can pick up a bag lunch or stock up on supplies from a campus food pantry operated once a month by a local community group.

“You know it is in you to become something, but you need the schooling to bring it out,” Staggers said.

The self-described former gang member said he has been homeless more often than not for most of the last three years. The behavioral health major would arrive at MCTC as soon as the buildings opened in the morning so that he could use the bathrooms and gym showers to clean up for class.

“Most homeless students do a good job of dressing up and blending in,” said Staggers, who is now vice president of MCTC’s Students Against Hunger and Homelessness Club. “We don’t want to go around looking like ‘Hey, I’m homeless over here!’ We have enough to go through without that.”

This winter, Staggers is living with a girlfriend—an arrangement that could be ended by a lovers’ spat.

“It is not my place, and you never know whether it will work out or not,” Staggers said. “Still, it is better than when I first started.”

Davis said that he is impressed by the resilience shown by Staggers and other homeless students.

“These are very talented people who are trying to make their life work under very difficult situations,” Davis said. “Imagine what a great employee they would be if they can manage going to school while homeless.”