Since August—when Michael Brown was killed by police officer Darren Wilson—I’ve found myself engaging in a peculiar fantasy: What if Brown and Wilson had been students at my community college?

Neither had attended college. Wilson, as far as I can tell, never signed up. But Brown was an almost college student. He was enrolled to begin classes this fall in a certificate program for heating, ventilation and air conditioning technology. 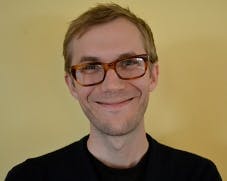 Nicholas Hengen FoxWhat, I wondered, would Brown and Wilson have had to say to each other if they hadn’t first met in the middle of Canfield Avenue, one apparently walking in the street, one in a police cruiser? What if they’d sat—on opposite sides of the classroom, maybe even next to each other—in my first-year writing course?

As I taught a Malcolm Gladwell essay about racial profiling, I pondered how it might’ve changed how Wilson saw Brown in the street that day.

It’s well documented that people with college degrees are more thoughtful about difference. And—more importantly in this case—police officers with higher education (a two-year or a four-year degree) are far less likely to use force on the job.

While my students read my favorite Lisa Delpit essay about rhetoric and power, I speculated how it might’ve helped Brown as he encountered Wilson. As I imagined these alternate trajectories, I kept thinking the community college could have helped.

Students growing up in our increasingly segregated society need our classrooms: where open admissions and less-offensive tuition combine to create a space where people who might otherwise become antagonists in a drama of predetermined structural violence actually interact as humans. They sit in the same room in a mostly peaceable way. They look at one another. They talk. They read each other’s papers and write on them.

In community colleges every day, students cross barriers that are nearly impossible to cross in most other places in America. And that, at least in my fantasy, might’ve changed things on August 9th.

Then I learned just how self-indulgent this fantasy was. The kind of thing I, as a highly-educated, middle-aged white person (e.g., a member of the professoriate), can speculate about to make myself feel better about the world we live in.

Just before Thanksgiving—the day after the grand jury chose not to hold Wilson responsible for Brown’s death—I received an email addressed to the more than 4,000 faculty and staff at my community college.

It contained a fairly innocuous list of resources for teaching about Ferguson.

Within hours, everyone at my college received a response from a faculty member—I’ll call him Pete—enumerating Michael Brown’s faults. Brown had robbed a store not long before being shot and had “intended to kill” Wilson. The message also noted that people had been rioting and looting (which was, it implied, somehow Brown’s fault). Pete signed off with the line: “Michael Brown was a thug who attacked a police officer and got himself killed. Stop trying to make him out to be a victim.”

As a faculty member at a community college, I was ashamed that a colleague—someone who encounters students of color every day—could think this way. That someone could actually write these words and send them to thousands of people, with apparently no thought (or care) for what it could do to his students or colleagues or what it said about our college hurt me in a more deeply personal way.

Thankfully, a quick cascade of responses critiqued Pete’s message, from its association of Brown with rioting to the use of the racially charged word “thug.” I calmed down, my utopian vision diminished, but intact.

But more responses like Pete’s followed. While their rhetoric was less heated, other colleagues castigated “political correctness” (for trying to take “thug” out of “our collective vocabulary”); they defended our nation’s absurdly high level of African-American incarceration and justified the use of force by police in various contexts. Others lamented the so-called “reverse racism” experienced by white people. A few critiqued the very notion of privilege and dismissed the possibility that colleges have played (or continue to play) a role in racial inequity. The messages were, by turns, aggrieved and steely with just-sublimated rage. All claimed to be listening, but not to be heard.

I read these messages like someone watching a natural disaster on television. But I was right there in the fire. We all were. Our institution that claims itself as an agent of social justice—a place to redress the trickle-down inequities of our society through somewhat affordable education—was full of people who were actively part of those oppressive structures. While they tutored students of color, they couldn’t recognize entrenched racism. While they worked to empower students, they lamented their own self-proclaimed lack of agency. Whatever version of justice I had been imagining might come of having Darren Wilson and Michael Brown in my classroom would just as likely be undone by the racist comments in their next class. Or even by my own unrecognized biases.

That initial email—and Pete’s response—generated 85 more reply-alls. Not all are so disheartening. In others, colleagues confront colleagues passionately around ideas about race and privilege. Some link to resources—on our campus and beyond—for people to learn more about white supremacy. Many share their own stories or stories of former students—or students’ relatives or family members or friends—whose lives have been damaged by police violence. A white faculty member tells the story of her adopted, African-American brother: she is a college instructor; he is in prison thanks to what she identifies as a pattern of discriminatory treatment.

When one message inspired hope, the next threw me back down into doubt. Linked together, though, they confirm one thing: how far we have to go. Despite our openness and inclusion, community colleges remain tethered to the elitist and exclusive history of higher education. Our faculty train at institutions that, by and large, continue to reproduce discriminatory practices in admission and, thus, we reproduce them in our hiring. In 2011, nearly 20 percent of community college faculty identified as underrepresented minorities—nearly twice the rate of two- and four-year colleges combined. Still, we are not inclusive enough. We need to hire more people of color, so that our students can see someone who looks like them at the front of the classroom.

But to diversify our faculty isn’t enough. The real struggle is to educate the faculty we already have. Only when we—I speak here particularly as a white faculty member—understand histories of oppression and challenge ourselves to recognize our own roles in them, can we even start to educate our students to live in this world. We need to hear the voices of our colleagues and staff and students and be willing to accept the challenge that they present us. We need our colleges to mandate constant anti-racism education. And we need to work on putting it into action daily. My campus—like most college campuses—is a long way from Canfield Avenue.

And while on campus people of color don’t face the threat of immediate physical violence in the same way they do in other places, these emails show just how prevalent the casual racism that enables that violence is.

So, really, how could any college have derailed the horror of Michael Brown’s killing? How can we possibly hope to stop the next death? These emails, I mean, have helped me give up my fantasy. But my real concern here is that my fantasy is one shared by other faculty and administrators: That if we do good enough in our classrooms, it’ll all work out okay in the end. The fantasy of the utopian community college that provides access to economic benefits while shaping a less-violent world may actually be incubating the very violence it wants to resist.

Even given all of this, our campuses remain one of the few places where Michael Browns and Darren Wilsons might encounter each other peaceably. For that fact alone, the community college is imbued with incredible potential. We can empower Michael Browns; we can educate Darren Wilsons.

But to do so, we need to recommit ourselves to the challenges inclusion presents. We need to prepare to give all kinds of students the tools to mitigate our ongoing history of violence.

Nicholas Hengen Fox is a full-time faculty member at a community college in the Pacific Northwest.

For more on this topic visit Diverse’s webinar White Privilege: How It Undermines Our Best Efforts to Diversify and Be Inclusive.