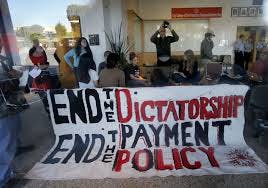 The elected board was replaced with a special trustee in 2013 in the wake of the Accrediting Commission of Community and Junior Colleges’ (ACCJC) attempt to remove the CCSF’s accreditation.

Students protested a press conference announcing the selection of the City College of San Francisco’s new special trustee with extraordinary powers, Dr. Guy Lease, this week. CCSF students and faculty have been vocal in their opposition to the state-mandated oversight of a single special trustee.

A meeting on Monday, which was initially closed to the general public, was opened up to the protesters at the behest of faculty union leader Tim Kellikelly.

During the conference Dr. Brice W. Harris, California Community Colleges Chancellor, announced that the elected trustee board would be reinstated on or around July 1 of this year, provided that its members complete professional training. “Based on the progress that the college has already made in the past couple years, its successful entry into restoration status, and on the commitment demonstrated by the locally elected trustees, we really envision that this board could assume full responsibility about four months from now,” Harris said.

Harris replaced the elected board with a special trustee in 2013, in the turmoil following the Accrediting Commission of Community and Junior Colleges’ (ACCJC) attempt to remove the CCSF’s accreditation. Since then, the college has been locked in a battle with the ACCJC. Faculty and students see it as a fight for survival—if the college loses accreditation, it will lose state funding and access to federal Pell grants, effectively forcing it to close.

CCSF faculty said they were surprised to learn the board might be restored in four months, since previous communications from the chancellor’s office said it would not be restored until July 2016. Even so, they will still fight for the board’s restoration.

“Even if you think that’s good, it’s like when you’re negotiating a contract, you continue to push,” said Dr. Tarik Farrar, chair of CCSF’s African American studies department, who witnessed the protest.

Restoration of the elected board of trustees is necessary for the embattled CCSF to get back on its feet, proponents of the college say. At Monday’s press conference, Brice noted that the college had met more than 90 percent of the accrediting standards, but many on campus are anxious that the college may still fall short of the ACCJC’s 2017 deadline.

When the board is reinstated, the special trustee will retain the power to overrule decisions that CCSF’s path toward accreditation.

Contention surrounding the special trustee goes back to Agrella’s appointment in the summer of 2013, when the ACCJC first threatened to remove CCSF’s accreditation. Students and faculty made it clear that they resented the imposition of a single leader whose appointment they had no say in, and say that leadership has been muddled and ineffective.

Agrella’s annual salary of $264,000 plus work expenses was another sticking point for faculty who agreed to pay cuts to see the college through tough times after the recession and the fall-out from the ACCJC’s threats to remove accreditation.

Earlier this month, Agrella unexpectedly announced that he would relinquish his position once a new special trustee is in place. Lease, retired president and superintendent of the Lake Tahoe Community College District, will reportedly earn $216,000 a year.