GREENBELT, Md.
Maryland’s four historically Black colleges and universities were given inside information on how to enhance and expand their partnerships and collaborative agreements with NASA last month at a daylong forum sponsored by the Goddard Space Flight Center in Greenbelt, Md.
At the same time, officials from NASA’s headquarters and Goddard were reminded of the rich reservoir of students and resources available at HBCUs as presidents of Morgan State, Bowie State, Coppin State and University of Maryland Eastern Shore outlined the schools’ existing programs and various strengths in the sciences.
As higher education officials and those in the corporate sector face the underrepresentation of minorities in the fields of science and technology, the forum highlighted the need for partnering between the two entities. As several presenters mentioned, the lack of minorities and women in the sciences is not just a concern for HBCUs, but a pressing issue for corporations such as NASA as they seek to fulfill their employment needs.
Dr. Ghassem Asrar, NASA’s associate administrator for Earth science, called on both parties to be pioneers and to work together in “developing a work force for the future.”
Much of the discussion focused on long-term goals and building lasting relationships. “We want to build partnerships that will help to develop new courses, new degree programs, research collaborations. Things that we can help get started but that the university will commit to sustaining,” said Dr. Phillip Sakimoto, program planning specialist for NASA’s office of space science. Sakimoto highlighted examples of such partnerships already in place at other HBCUs, including Virginia’s Hampton University and Southern University in Louisiana.
Dr. Earl Richardson, president of Morgan State University, emphasized the need to develop an ongoing financial relationship as well. “We are going to need to have you involved with us with sustained grants and support,” said Richardson.
One way for HBCUs to strengthen their financial ties with NASA is to take advantage of contracting opportunities offered by the agency, says Thomas Green of NASA’s office of small and disadvantaged business utilization. According to Green, by focusing on grants only, HBCUs and minority institutions have only tapped 1/20th of the money that NASA gives away each year. Of the $10.9 billion in NASA spending, 80 percent to 90 percent goes out for contracting, he says. Green encouraged the university officials to seek these opportunities and to take advantage of training classes offered by the agency to familiarize them with necessary policies and procedures. 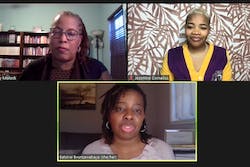