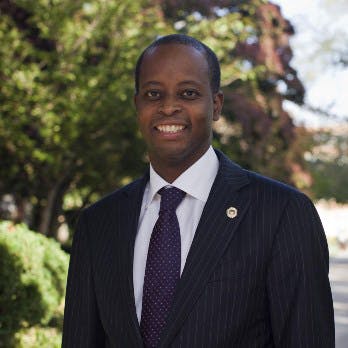 Dr. Wayne A.I. Frederick announced that he believed President Obama should extend the proposal to include HBCUs to NBC-4 reporters on Wednesday.

President Obama surprised many when he unveiled his vision in January for free community college. Some scoffed at the proposal, which would allow students to go to college for free as long as they maintained a 2.5 GPA and made steady progress toward their degree, as too utopian to ever be realized.

The president of Howard University, Dr. Wayne A.I. Frederick, announced an even more grandiose vision for the future of American higher education. Frederick announced that he believed Obama should extend the proposal to include HBCUs to NBC-4 reporters on Wednesday.

Frederick’s proposal underscores a concern among HBCU leaders that free community college could be a disaster for their institutions.

Others, such as Dr. Ivory Toldson, deputy director of the White House Initiative on HBCUs, support the idea of free community college.

“I support the proposal. I supported it as a first step toward universal higher education for the United States,” Toldson said. “We haven’t always had universal K-12 in this country, and I’m sure there were debates when they were proposing that. But it’s time for us to make some steps toward making costs not be a prohibitive factor toward somebody achieving higher education.”

Few would dispute the idea that college is prohibitively expensive and that even community college can represent a financial sacrifice for some students. Yet others said there is a broader picture at stake, concerning the viability of all minority-serving institutions, not just HBCUs.

“I think the whole thing was provocative. Not just President Frederick’s idea, but President Obama’s discussion. Both men’s proposals are interesting, because people are talking about them. So maybe out of this will come a realistic solution,” said Johnny C. Taylor Jr., president and CEO of the Thurgood Marshall College Fund (TCMF).

Taylor said that a better option would be to pay for students’ first two years at any public institution and to make sure that this benefit only goes to students whose financial circumstances require it. That way, students can choose where they want to go and avoid “under-matching.”

Under-matching is a particularly important part of the conversation, Taylor said, because it siphons away talented students to schools that might not serve them well. Even though HBCUs are commonly criticized for a low graduation rate, or 36 percent at four-year HBCUs, community college graduation rates are lower yet.

The point Taylor made brushes on another problem in higher education—discrepancies with available statistics. Only 20 percent of students complete their credentials at public two-year-degree institutions in three years, according to recent National Center for Education Statistics data. However, community college stakeholders have pointed out that those numbers are not entirely representative, leaving out transfer students, for example.

“We absolutely support any effort to increase access and affordability for students, without question,” Taylor said. But he stressed the importance of considering the impact that such a major policy change might have on students and schools.

Free community college would spell lower enrollments and income for HBCUs, particularly private ones. The mathematics are too simple—going to a local community college near their home would save students on tuition, transportation and lodging costs.

“Anyone who believes that sort of calculus won’t occur, time after time, if this were to become law—they’re being naïve,” Taylor said.

Dr. Robert T. Palmer, associate professor at Binghamton University, had similar views. Though he doubts America’s College Promise will ever be implemented, if it were, HBCUs would probably see two primary negative consequences. First, enrollments might drop as students choose the less costly alternative. Second, HBCUs might fall in college rankings even further due to biases in the IPED’s data collection system.

“We have to remember that, if a student starts off at a community college and then transfers in to an HBCU and graduates from an HBCU, that HBCU will not get that credit for that student graduating,” Palmer said. Under the current methodology, only first-time, full-time students are counted. Graduation rates at HBCUs might therefore take a hit.

Kimbrough said he doubted the proposal would ever become a reality and certainly not in the state of Louisiana, where public colleges and universities will face $300 million in financial reductions, starting in July 2015. In Obama’s vision, states would pay for about 25 percent of the costs.

Setting the state’s financial difficulties aside, a better use of available funds would be to increase Pell grants, Kimbrough said. That way, students would be free to choose between a two- and four-year college.

“Give them a chance to choose what they want to do,” he said.

Kimbrough fears that pushing students to community college might have unintended consequences. He pointed to research on graduation rates done by Dr. Vincent Tinto, professor emeritus at Syracuse University, showing that Black students are four times more likely to graduate with a baccalaureate degree if they start at a four-year institution.

“If you track everybody to a two-year institution, and that person is only going there because they have the money to go, we’ve set them up, because the odds now are really stacked against them from ever getting a four-year degree, if that was their intention,” Kimbrough said.