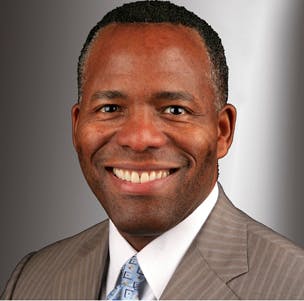 As president of Puget Sound, Isiaah Crawford plans to spend his first year immersed in the university.

Isiaah Crawford’s next step in higher education is just 40 miles up the road. The provost at Seattle University will become the 14th president at the University of Puget Sound in Tacoma, Washington, beginning July 1.

A lover of liberal arts institutions, Crawford considers Puget Sound one of the most exceptional.

“It’s got a great faculty, dedicated staff, and just really talented and highly motivated students,” he says. “I’m so glad and blessed that they thought I would be a good match.”

Crawford was raised in St. Louis by his grandmother, mother and aunt. “Their lives were structured around trying to provide opportunities for me such that I would be able to pursue a college education,” he says, the first in his immediate family to graduate from college.

As an undergraduate at Saint Louis University, a Jesuit Catholic liberal arts institution, Crawford fell in love with higher education. In addition to studying a broad array of subjects, “I had great faculty persons and people in my life back then who took an interest in me. And it helped me think about life and opportunities that were before me that I, on my own, wasn’t able to see as clearly,” he says. “That really helped me recognize just how important dedicated, student-oriented faculty are to the experiences of students.”

During Crawford’s collegiate years, psychology became his most intriguing subject. “I was just always fascinated by human behavior and was curious about why people do some of the interesting, unusual things that we do,” he says. “And I wanted to try to understand that.”

Crawford received a bachelor’s in psychology in 1982. He narrowed his focus to clinical psychology when he attended DePaul University in Chicago, where he earned a master’s in 1985 and a Ph.D. in 1987.

DePaul’s approach to educating consisted of training students as behavioral scientists, clinicians and clinical psychologists, Crawford says, adding that this approach allowed him to conduct research as well as pursue careers in higher education and private practice.

Crawford started a clinical practice in Chicago in 1987. At the same time, he began on the tenure track as an assistant professor at Loyola University Chicago. At both the undergraduate and graduate levels, Crawford taught courses such as theories of personality, human sexuality, psychotherapy theory/clinical supervision, human diversity and more.

“I really enjoyed those types of courses and taught with a variety of styles and approaches—everything from the traditional lectures and Socratic approach to more of a flip classroom where you’re much more discussion and problem-focused to address the basic concepts of the material,” he says.

Between 1987 and 2008, Crawford climbed the ranks at Loyola to become dean of the College of Arts and Sciences. Stepping into more administrative roles meant interacting less with students, which he sorely missed, Crawford says. However, as the nature of being a psychologist allows him to excel with details and process-oriented tasks, his talents were needed elsewhere.

“I have been very fortunate to have been in situations where people thought that I may be effective or useful, and then they extended invitations for me to put my hat into the ring,” Crawford says.

In 2008, he accepted the position of provost and chief academic officer at Seattle University.

“We’ve been able to do some really wonderful things over the course of these eight years. Faculty, staff and students have been open to change and to entrepreneurship and innovation,” Crawford says. Most notably, he was at the helm of more than $200 million in development that included the renovation of the university library, a new residence hall and a remodeled intramural athletic field.

As president of Puget Sound, Crawford plans to spend his first year immersed in the university. “I want to really learn about the history and the culture of the institution—really get to know the people who are there, the faculty, the staff and students. I want to try to spend as much time with them as I can.”

Then, Crawford says that he plans to develop a strategic plan through “a collaborative effort that will allow everyone to be able to have voice and input so we can have a shared and fully-committed approach to what we want to try to accomplish.”

In the broader realm of higher education, Crawford says that he hopes people will see his contributions “as being demonstrative of just how powerful a liberal arts education can be and how transformative the impact that faculty and staff at colleges and universities can be to students—particularly to first-generation college students who get to colleges and universities not quite as familiar with them and perhaps are a bit unsure of themselves. They play such a crucial role helping to shape the future lives of those students who are fortunate enough to be there, and I think my experience, and my story, if you will, demonstrate that in some respects.”