The Clinton Acceptance Speech and the Future of Higher Ed

Hillary Clinton delivered a solid acceptance speech at last week’s Democratic National Convention that had everything in it.

And then there were the dead-on Trump Dumps. 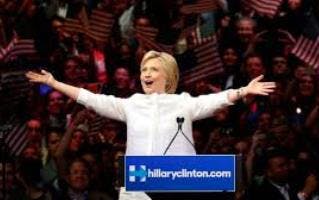 Those are just my highlights. The speech was as full as the family holiday dining table. Because it was a momentous occasion: history.

When has a woman ever been nominated by a major party? Never.

When has America elected a woman to be its leader? Never.

But our country is getting closer.

At this point, it must be said, the Philippines, America’s first colony, since its independence from the United States in 1946, has elected two woman presidents, including the iconic “People Power” icon, Cory Aquino.

America is a little late on the “woman as leader” thing.

So the main goal of Clinton’s speech was to serve history. And to show the nation that, given the choice before us, she is the best person to be president. Clinton was as strong as any man, and stronger than Trump, whom she stared down at one point on the issue of taking on ISIS.

After Clinton outlined her strategy, including use of air strikes, local ground support, improved intelligence and efforts to disrupt radicalization of young people in this country, she assured the United States would prevail.

“Now Donald Trump says, and this is a quote, ‘I know more about ISIS than the generals do,’” Clinton said. Then she looked into the camera and said point blank, “No, Donald, you don’t.”

Her attacks on Trump were perhaps the strongest part of her speech. She exposed Trump’s temperament as unfit to be our commander-in-chief, citing Trump losing his cool often in the campaign.

“Imagine, if you dare, imagine, imagine him in the Oval Office facing a real crisis,” Clinton said. “A man you can bait with a tweet is not a man we can trust with nuclear weapons.”

And, of course, Trump proved her right the next day at one of his own campaign stops, saying he “wanted to hit a couple of those speakers so hard,” at the Democratic Convention.

Presidential material? Or is Trump really too emotional to be president?

We are now out of the realm of party loyalty and ideological divisions. What’s really in the best interests of our country?

It’s making this year’s presidential vote a referendum on the intelligence of the American people.

In the race for the highest office in the land, are we smart enough to discern the real public servants from the frauds?

If we aren’t, then maybe the most important part of Clinton’s speech is her outline on higher education spending.

All campaign season, we’ve heard the battle cry for “free college” and making college affordable and “debt-free for all.”

The broad strokes of such a plan were again in the speech last week.

But already the critics have emerged, saying it may be too complicated to figure out. Issues of sovereignty abound. States want their fair share, big and small. On the individual family level, how do you keep from paying for college educations of a rich White billionaire?

Well, that’s the idea of K-12 public schools. It’s compulsory for all, but people can opt out for private school. Making public education essentially K-16 would impact private schools, but with different endowments and existing subsidies in the mix, it’s not clear by how much.

One estimate reportedly pegs the costs of a free-tuition, debt-free approach to around $35 billion. It’s a figure intended to frighten.

But then compare that to real infrastructure spending.

As The Fiscal Times reported: “According to the 2013 report card by the American Society of Civil Engineers, the U.S. has serious infrastructure needs of more than $3.4 trillion through 2020, including $1.7 trillion for roads, bridges and transit; $736 billion for electricity and power grids; $391 billion for schools; $134 billion for airports; and $131 billion for waterways and related projects.”

Paying for college education as human infrastructure at $35 billion sounds like a sound and necessary investment.

Of course, the details of any actual free-tuition, no-college-debt plan will go through a political process.

You don’t get all of that in an acceptance speech.

Clinton almost singlehandedly took it on when she was first lady. That laid down the foundation for the health care reform that took place in the Obama administration.

As a modern political idea, the notion of free college or debt-free college isn’t going away, especially with Clinton adopting Sanders’ lead on the issue.

If we value the idea as a nation of the need for real reform in college affordability, it stands a better chance of becoming a full-fledged reality under a historic Clinton administration.

Emil Guillermo is a journalist and commentator. He writes at http://www.aaldef.org/blog.