From the medium-security prison where he’s been incarcerated since 2009, Robert M. Williams has continued to nurture a boyhood dream of designing and selling the sartorial finery he’d admired in glossy magazines and on the bodies of folks with a certain income.

“It’s going to be like Ralph Lauren’s Polo. On that level. That’s all I can say about it right now,” says Williams, 26, convicted of robbery, murder and attempted murder — major crimes, he adds, that he abetted, when he was 15, but didn’t actually commit.

Williams was discussing his wayward teenage years and his planned future in fashion, just moments before a piped-in version of “Pomp and Circumstance” filled a makeshift auditorium at the Arkansas Department of Corrections’ Wrightsville Unit. That anthem kickstarted a November evening’s college commencement for Williams, 22 other incarcerated persons and two individuals who’d been recently released from prison and, under an Obama-era pilot project, earned their associate degrees while behind bars.

“All God’s children have value,” says Dr. O. Jerome Green, at the top of that ceremony marking 400-student Shorter College as the first historically Black campus and the third campus of any sort to confer degrees through former President Obama’s Second Chance Pell Grant experiment. With 69 participating colleges and universities nationwide, that endeavor launched in summer 2016 as part of a multi-pronged bid to give those leaving prison marketable and other every day skills that could prevent them from cycling back to incarceration.

“Our mission,” Green tells Diverse days before Shorter’s inaugural commencement for what he hopes will be a longstanding program for inmates, “is to create a bridge, moving people from impossibility to possibility.” 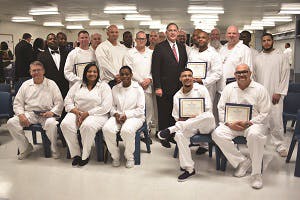 In addition to two year-institutions such as North Little Rock-based Shorter, four-year ones including Bard, Bennington and Holy Cross colleges and Auburn and Rutgers universities are Second Chance Pell pilot sites. Collectively, their programming aims to gauge the merits of resurrecting college curricula in prisons — given education’s potential to propel poor people, in particular, who disproportionately are counted in the criminal justice system — and financing that through income-based federal Pell Grants. A 1994 crime bill, approved by a Democratic-controlled Congress and signed by Democratic President Bill Clinton as crime rates were soaring, banned inmates who’d been enrolled in previous iterations of prison-based academics from getting federal Pell Grants. Lawmakers made that shift, despite research suggesting that a solid education is a hedge against poverty and criminality, and against those who’d already done prison time recommitting crimes once they went home again.

But in recent years, a bipartisan push for criminal justice reform has supplanted the previous tough-on-crime, bare-bones approach to prisoners, one that critics contend drove up already high prison costs and did little to show former inmates how to thrive socially and economically on the outside. President Trump and U.S. Secretary of Education Betsy Devos are among Second Chance Pell backers — there also are opponents  — which reflects something about its appeal to a cross-section of legislators, business titans and others.

“It’s so important that we move people from incarceration into work,” Arkansas Gov. Asa Hutchinson, a Republican, says, during his keynote address to Shorter’s Second Chance contingent, their kin, friends, Shorter faculty, correctional professionals and others.

Both academia and the workplace must do more to include those akin to the 25 newly degreed persons — 23 men, two women; one Latino, 12 Blacks, 12 Whites — he was saluting. In addition to all else, Hutchinson adds, more employers must stop bypassing applicants who, on job applications, “check the box” affirming that they have a criminal record.

To become a Second Chance Pell grantee, an inmate must be within five years of release from prison, a minimum-risk or a model prisoner, and have a high school diploma or a General Equivalency Development certificate (Arkansas is among states requiring inmates to have a diploma or GED when they arrive or be working to get a GED, while incarcerated).

Shorter’s Second Chance curriculum focuses on entrepreneurship and is taught by full-time and adjunct professors at the Wrightsville Unit’s separate male and female inmate divisions and at state correctional facilities in Fayetteville, Little Rock, Malvern, Osceola, Texarkana and West Memphis. Ethics, law, human relations, financing, management, marketing and e-commerce are among the business courses these Shorter students must complete.

“This has been challenging, difficult, but also so much fun,” says aspiring fashion designer Williams, a Little Rock native who was tried as an adult on those felony charges back in 2009. “It’s part of a transitioning from not really knowing who you are and where you come to finding out what your purpose could possibly be.”

For the inmate collegians — some among a total of 329 enrolled at Shorter’s sites had finished some college, prior to prison — the academics are rigorous, says Stormy Cubb, Shorter’s director of sponsored programs.

Heightened self-confidence is a byproduct of their inside-prison classroom engagement and their supplemental group and solo study outside the classroom, says Cubb, who oversees Second Chance Pell. “They’ll be hunkered down in a corner somewhere, trying hard to get a lesson out about Roe versus Wade, a topic they may have never heard of before going to college. In those prison barracks, that kind of determination is infectious.”

Above all, she adds, “Hope is what I see come alive in them.”

Inmates’ optimism and resolve are essential in their going-on, especially given how comparatively unfriendly many, but not all, potential employers have been to low-level and high-level offenders alike, says Margaret diZerega, project director for New York City-based Vera Institute of Justice. The U.S. Department of Justice retained Vera, a national research and advocacy organization, to technically assist Second Chance Pell sites and to suss out and catalogue practices yielding the best results.

“We know that 65 percent of jobs in 2020 will require post-secondary education,” continues diZerega, an expert in housing, employment, family relations and various other aspects of societal re-entry for former prisoners.

“The more that people leave prison with these credentials, the more people will be prepared for the kinds of jobs that will be out there,” she says. “With these current, low unemployment rates, employers are really looking for people who have credentials to be successful in their jobs. And from a public safety perspective, we know that people who participate in these programs are 43 percent less likely to recidivate.”

Getting out, staying out, succeeding is important for the incarcerated, their communities and the people closest and dearest to them, says LaShaun Chidester, 47, slated to leave prison in October 2019, her new degree from Shorter in hand. “I have two daughters, 18 and 20. By me doing this, going to college in prison, I’ve inspired them. My 20-year-old is now a freshman in college,” adds Chidester, a Pine Bluff, Arkansas resident, convicted in 2013 of negligent homicide related to a car accident that killed a man.

“This,” interjects Lestine Robinson, “is my new beginning.” Standing with Chidester, she was taking a break from posing for photos snapped by prison correction officers who oversee them daily and applauded them on commencement day.

“I’ve been locked up for 19 years,” says Robinson, convicted on a murder charge that, she adds, she accepted so that a younger relative wouldn’t have to. 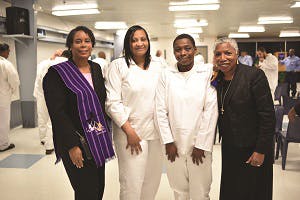 Continues Robinson, who’s from Helena, Arkansas: “I’m the first in my family to get my GED and the first to go to college. When I get out of here, I am opening a shelter for homeless people. My business plan is already drawn up. I want sponsors, a school, a chapel, round-the-clock services so that people who have nowhere to go won’t have to leave.”

“This opportunity,” says Richard Thomasson, 43, convicted of sexual assault and kidnapping in 2006, “is unprecedented in corrections. This is an opportunity to do something that is actually rehabilitative in nature, so that when I leave I have something in my pocket … This degree not only will help me with employment but with my own sense of self-worth, my esteem, my knowing that success is an option and that I can serve my community.”

As president of the Inmate Council of the state prison system’s Pine Bluff Unit, Thomasson says he helps oversee sales of supplies to inmates that generate $200,000 in annual revenue. Those duties will help keep his momentum going and his entrepreneurial skills honed until his expected release from prison in 2021, when he plans to pursue his bachelor’s degree. No four-year Arkansas colleges are Second Chance Pell sites, and there is no way for him to continue his studies, inside prison, right now.

As he spoke, Thomasson’s parents stood beside him. “My son accomplishing this is really emotional for us,” his mother, Deana Thomasson, says, then turns to her boy. “I love you, son.”

She redirects herself toward this reporter: “He’s the only one of our three children who has a college degree. The others are successful in their own right … “

She points to the wood-carving Thomasson crafted and, on behalf of his graduating class of 25, presented to Shorter President Green: “I’m his mother. And I want to tell you, he handmade that plaque, built it himself.”

Tatiana Phillips, 20, a college freshman studying psychology who is also the oldest daughter of new Shorter graduate LaShaun Chidester, was on hand to celebrate. “We came to this graduation to let our mother know we are here for her, and so proud. If she can do college, I can do college. We can do this whole thing, together.”

This article will appear in the December 27, 2018 edition of Diverse.