Sean L. Huddleston has been named the next president of Martin University, a private, predominantly Black institution (PBI) in Indianapolis, the Board of Trustees announced this week. 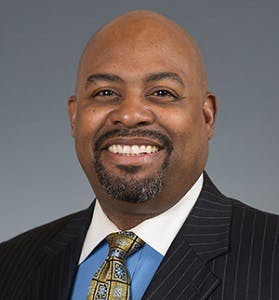 Huddleston, who is currently vice president for equity and inclusion at the University of Indianapolis, will begin his tenure as Martin’s sixth president on March 25.

During his presidency, Huddleston expects to build on predecessor Dr. Eugene White’s efforts by growing enrollment, addressing affordability, increasing funding and preparing students to successfully compete in the workforce.

“I am deeply honored and extremely excited to have been selected to serve as the next president of Martin University,” Huddleston said of his appointment. “I truly believe that its rich history and mission makes Martin one of the most important higher education institutions in our region.”

Having attended two historically Black institutions (HBCUs) – Howard University and then Alabama State University – Huddleston is more than familiar with how important of a role it is for Martin to serve as Indiana’s only PBI.

Tapping into Martin’s traditions and history, upholding the culture of support found at HBCUs and creating and fostering resilience for students are among the things Huddleston said he expects to promote throughout his presidency.

He also has his eyes set on making sure that Martin is seen as a “communiversity” – a place that “is in, about and for the community,” he added. He pointed out the university’s place as a beacon of opportunity for a diverse population of students, particularly nontraditional students.

“A school like Martin helped me to get my degree,” said Huddleston, who earned his degree nearly 20 years after he first started college. “Martin University represents who I am as a student and individual.”

Huddleston is currently on track to earn his Ph.D. in Higher Education Administration later this year from Ferris State University.

Board of Trustees chair Dr. Nancy Chism praised Huddleston for his  commitment to educating students who have previously been underserved in higher education.

“He seemed to personify our mission,” said Chism, who is also Professor Emerita at Indiana University. “His background testified to his experience in cultivating excellence and achievement in an inclusive environment. He also knew the surrounding community and wanted to be a leader in Indiana. When he interviewed for the position, he captivated the attention of the search committee with his sincerity, energy, preparation and ideas for Martin University.”

Among these ideas are plans to increase retention and graduation rates above national and regional levels, support faculty and staff effectively, remove barriers for students’ success, and significantly, establish and refine programs that meet the needs of Martin’s student body and regional workforce partners.

“The best leaders make a way and then get out of the way,” Huddleston said of his leadership approach. He had an opportunity to meet with faculty and staff on January 4, and plans to engage with students to understand their needs, figure out what motivates them and examine ways to translate students’ life and work experiences into academic credits and learning experiences.

Recognizing that employers in the Indianapolis region and beyond are struggling to diversify their workforce, Huddleston said that “Martin University is great place to help them do that.” The university, he said, is a producer of “quality candidates who can help them organizationally.”

Huddleston’s selection as president calls attention to the increasing regularity of the diversity officer forging a path to the college presidency.

Huddleston said that his prior diversity, equity and inclusion work at UIndy, Framingham State University and Grand Valley State University granted him an opportunity to support faculty and staff on their journey to becoming “culturally fluent,” which helps the institution “meet students where they are,” he said.

“We as chief diversity officers work across the institution collaboratively,” Huddleston added.

At Martin, Huddleston plans to bring his combined experiences in diversity work, adult education and education leadership and his passions for “creating conditions of success” for underserved and marginalized students to the institution that was founded in 1977 by Rev. Father Boniface Hardin and Sister Jane Schilling.

Huddleston said he is lucky to continue the service-mission and legacy of the founders and the work of outgoing president Dr. Eugene White, who helped stabilize and turn the university around.

In the statement announcing Huddleston’s appointment, Chism noted that the Board “enthusiastically” welcomes him to campus.

“It was crucial for Martin University to find a president who has a servant’s heart, can articulate its unique mission, and inspire the faculty, staff, and students,” the statement said. “[Huddleston] embodies those important qualities and has a clear vision of Martin’s special role in the state.”