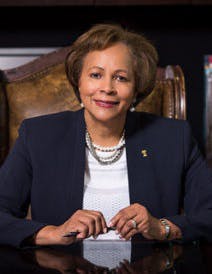 The $500,000 gifts from both The Papa John’s Foundation and the Z. Smith Reynolds Foundation are the largest contributions in the 146-year-old institution’s $5-million fundraising campaign to reinstate the college’s accreditation by Feb. 1. With the fundraising deadline a week away, Bennett leaders believe the latest gifts will inspire others to continue donating and investing in the college’s future.

“We are so thankful and grateful for the support given by organizations, faith leaders, corporations, foundations, individual donors and especially the individual donors who give anywhere from $1 to $50,000,” Dawkins told Diverse. “We are amazed at the amount of support that we are receiving.”

Last month, Bennett appealed a Dec. 11 decision by the Southern Association of Colleges and Schools Commission on Colleges (SACSCOC) to remove the all-women’s HBCU from membership due to its financial standing. Leaders issued a call for support in advance of a Feb. 18 formal accreditation hearing, sparking the #StandWithBennett campaign.

Recent contributions to the college have come in from Black fraternities and sororities, such as Alpha Phi Alpha Fraternity Inc., which donated $31,000 last week, and Delta Sigma Theta Sorority Inc., which raised $30,000 for Bennett. In addition, Newmark Knight Frank, a commercial real estate advisory firm, recently donated a check for $10,000 on Thursday.

“Every day, donations are coming in,” Dawkins said, adding that receiving the gifts from the Papa John’s and Z. Smith Reynolds Foundations back to back “was overwhelming.”

During the news conference, Bennett board chair Dr. Gladys A. Robinson thanked Z. Smith Reynolds Foundation executive director Maurice “Mo” Green for the foundation and trustee’s generous gift of half a million dollars and acknowledged the foundation’s investment in education.

Dawkins also thanked the Papa John’s Foundation for choosing to support the “protection of our college’s legacy as well as reignite the conversation around the importance of supporting diverse institutions around the country.”

“We’ve moved this needle,” Robinson said. “Bennett’s on a roll and Bennett’s going to do it. There is no question in our mind. We have no question that Bennett College will keep its accreditation.”

Dawkins said she hopes the “world-wide” attention will not stop the donations because the college needs to continue planning and operating for the future.

“We are hoping that the funds received will continue to supplement our vision to re-engineer the institution for the future focusing on market-driven programs, building the endowment, increasing enrollment and retention and just improving student life overall,” she said.

The institution’s newly approved strategic plan “Innovate 2020” will focus on integrating technology into academic programs, workforce preparation and how Bennett operates in its organizational structure. Moreover, leaders have already identified new programs for students in cybersecurity, health sciences, technology and other areas based on market-driven studies and Bennett has also accepted 4,000 students for the fall, leaders said.

“We are pleased that students are still interested and students of color are still coming to Bennett College,” Dawkins said.

Founded in 1873, Bennett became women’s only in 1926, making it and Spelman College the only two HBCUs to exclusively educate women. HBCU queens and kings, students and alumnae, celebrities and national organizations are among the throng of supporters who #StandWithBennett as it appeals SACSCOC’s December accreditation decision.

Presidents of several women’s colleges also noted their solidarity with Bennett, highlighting the sense of sisterhood found at the institutions and their mission to prepare strong women leaders.

“I want to ensure that President Dawkins knows that the women’s college community continues to support her,” said Agnes Scott College president Leocadia I. Zak, a Mount Holyoke graduate. “I encourage President Dawkins and her team to persevere during this difficult time, and to also embrace their college mission: ‘to lead with purpose, integrity and a strong sense of self-worth.’”

Dr. Pareena G. Lawrence, president of Hollins University, said she commends Bennett’s students, faculty, staff and alumnae for upholding “a worthy and critical mission that is as relevant today as it was when the college was founded.”

“Hollins stands with Bennett and supports the college’s enduring commitment to prepare women to lead lives of consequence,” Lawrence said.

Dawkins said that come February, Bennett College will be in “excellent condition” to be successful with its appeal. Should the appeal be unsuccessful, leaders will enter into a lawsuit with SACS.

“The outcome of the appeal is that we are fully reinstated as a member of SACS – if not SACS, then TRACS,” she said, referring to the Transnational Association of Christian Colleges and Schools accrediting agency. “The message here is that we will remain accredited whether it’s SACS or TRACS.”

Lois Elfman contributed to this report.