Trump Touts Relationship With HBCUs With Eye on 2020

President Donald J. Trump spoke at the Presidential Justice Forum at Benedict College on Friday, where he received an award from the 20/20 Bipartisan Justice Center for the First Step Act, prison reform legislation passed in 2018.

It was Trump’s first appearance at a historically Black college. But it wasn’t his first time publicly touting his relationship with HBCUs. 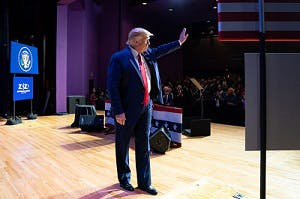 In his speech at Benedict College, Trump praised his administration for its financial support of HBCUs and for low unemployment rates for African-Americans, making multiple references to the 2020 election.

HBCUs seemingly have a role to play in Trump’s strategy for 2020, forcing them to navigate complicated relationships with his administration and their constituents.

“He has extremely low approval ratings from African-Americans,” said Dr. Melanye Price, an endowed professor of political science at Prairie View A&M University. “He has been basically lambasted by all the major civil rights groups. He is clearly not seen as a friend to Black people.”

If Trump is using HBCUs as a platform to secure a higher percentage of the Black vote, she doesn’t think it’ll work.

Only 4 percent of African-Americans think Trump’s presidency has been good for Black people, according to a recent poll by the Associated Press and NORC Center for Public Affairs. Meanwhile, only 8 percent of Black people voted Republican in 2016.

Those numbers are “a resolute no,” Price said. 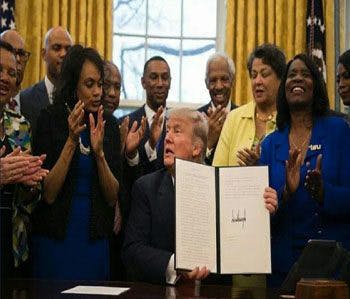 Trump has done a number of things that haven’t endeared him to the Black community – his vulgar put-down of certain African nations, his language around immigration and his appointment of former Attorney General Jeff Sessions, whose commitment to civil rights has been questioned, to name a few. Just last week, he compared his impeachment inquiry to a “lynching,” drawing widespread criticism.

Dr. Matthew Platt, an associate political science professor at Morehouse College, said Trump’s relationship with the Black community is antagonistic “to the extent that it exists at all” because of his rhetoric, which is why efforts like his speech at Benedict College won’t successfully turn African-American voters away from the Democratic party.

Trump is engaging in “transactional policy-based outreach” – championing criminal justice reform and HBCU funding in exchange for support – when the Black community’s problems with him aren’t only “rooted in policy,” Platt said. So, Black voters are saying, “It doesn’t matter how much you give me. You are who you are. I’m not voting for you.”

But Platt doesn’t think Trump’s goal is actually to secure more of the Black vote when he talks about HBCUs. It’s a “strategy of demobilization,” he said, an attempt to get just enough Black voters to question the Democratic party to vote for a third-party candidate or not vote at all.

“That will allow Trump to squeeze out the same kind of electoral college win he had in 2016,” he said.

“Whites don’t want to vote for people who they think are racist,” she said. “That was true before Trump. I don’t know if it’s true now. But generally, it’s a way to show a level of commitment to diversity to be seen in Black spaces, to have Black people you associate with. Often that’s done through Black churches and Black colleges.”

Visiting HBCUs is a “traditional overture” for Republican lawmakers, Price added. It’s a form of outreach to the Black community they can do “without ruffling the racial resentment of their base.”

While not unique, Trump’s public displays of affection for HBCUs put their leaders in an awkward position. HBCUs are historically underresourced and rely more heavily on federal dollars than other institutions. For public HBCUs, 54 percent of their revenue comes from federal, state, and local funding, according to an American Council on Education and United Negro College Fund report. At Benedict College, U.S. Department of Education data shows that 87 percent of students receive federal loans.

HBCU leaders’ constituents – students and alumni – are largely against Trump’s presence at HBCU-related events. For example, Sen. Kamala Harris, an HBCU graduate, threatened to drop out of the Presidential Justice Forum because of Trump’s speech.

After all, “he’s a different kind of Republican president,” Price said. “He is someone who has been outwardly hostile to Black people.”

At the same time, HBCU leaders feel like they can’t risk their federal funding.

“It’s difficult for them to say they are going to refuse a visit by the president, a president who we know targets people both in his Twitter account and in his policies when they disagree with him or they do things he doesn’t like …” she said. “Keeping the lights on at historically Black colleges is a fragile process.”

Still, she thinks Benedict College President Roslyn Clark Artis “should have and probably could have said no.”

For Platt, it also seems like a “fairly easy choice” to reject Trump, though he understands why HBCUs hesitate to risk the tangible resources he can provide their students.

“… If we as an institution were to cozy up to the Trump administration for a few dollars, to us it says that we think as Black men we should put a price on our integrity,” he said. “I think that’s a bad message to send to students.”