With the goal of putting a spotlight on mental health, the United Negro College Fund (UNCF) and The Steve Fund, an organization promoting mental health and emotional well-being for young people of color, partnered a conference for Historically Black College and Universities students. Sessions addressed stigmas that people of color may face around seeking help for issues of mental health and how different situations and scenarios can be addressed.

The conference, titled "Unapologetically Whole: Living Your Best Mental Health Life" was sponsored by Peloton and Blue Shield of California. Last fall, Blue Shield’s partnership with The Steve Fund kicked off with a survey distributed to HBCU students, faculty and staff to gauge the state of mental health on HBCU campuses.

“Among the findings, students, faculty and staff all agreed that the top three mental health concerns for college students are stress, anxiety and depression,” said Dr. Annelle Primm, senior medical director of The Steve Fund. “We believe that being unapologetically whole is not the absence of mental health concerns or of struggle. Being whole necessitates embracing all student identities and experiences while reflecting on what growth and healing entails and how to traverse barriers.”

“We must work together collaboratively on a variety of fronts to create and sustain a range of affordable, accessible, culturally competent mental health resources for students, faculty, staff, parents and their friends,” said Hope Scott, senior vice president and general counsel and corporate secretary of Blue Shield of California. “We must meet HBCU students where they are. That means having the right programs, mental health professionals and training available to the people students’ feel most comfortable turning to for help.”

Scott said it’s essential to have mental health professionals who understand the culture and lived experiences of the patients with whom they’re working.

“Mental health is the emotional, psychological and social well-being that everybody has,” said Molock. “Mental well-being is a component of mental health. The goal here is for you to excel and thrive. We don’t want you to just survive, just barely make it. … When students are just surviving, that’s not optimal mental health or well-being.”

She noted a continuum: excelling, thriving, surviving, struggling and in crisis. She said that most students don’t seek mental health care until they’re in crisis. If a student acts as if surviving is enough, the individual will begin to normalize that behavior.

SAMHSA (Substance Abuse and Mental Health Services Administration) released the Mental Health in Black College Students Fact Sheet, which noted that 50% of Black college students (not only at HBCUs) received no education about mental health issues before going to college. Molock noted that many students suffer in silence.

The survey conducted last fall showed that 76.9% of students said they’d like to be informed about mental health services, but only a little more than half felt comfortable visiting the counseling center. 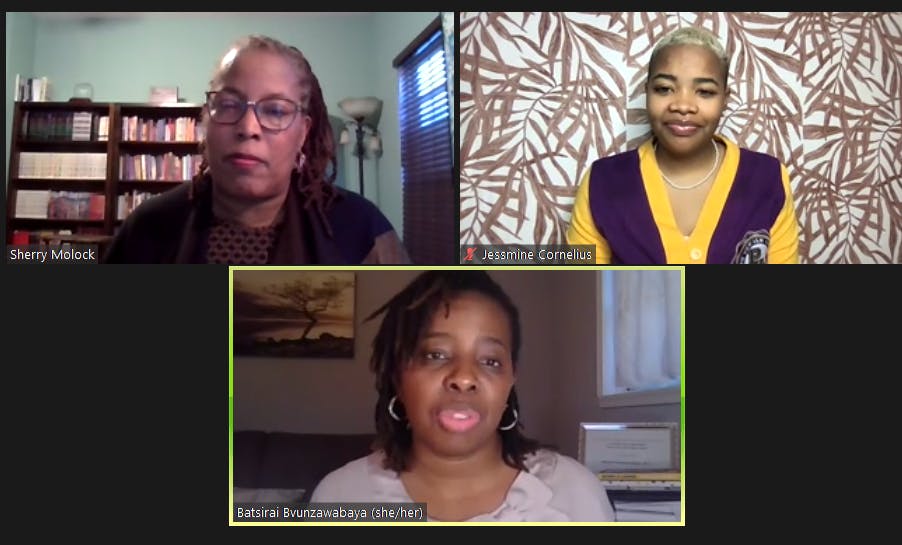 “We have to think carefully about a two-pronged approach,” Molock said. “One is how can we help students feel more comfortable reaching out? And maybe we need to also equip friends and family to help people with mental health support because those are the natural helpers in our environment.”

On the syllabus for every course she teaches, Molock lists mental health services as well as other resources for students and she encourages open conversation about mental health in the classroom.

Jauan T. Durbin, a Morehouse College graduate who is openly queer and gender non-conforming, and Dr. Carlton Green, a psychologist and Steve Fund advisor pointed out that there is a limited amount of literature about the experiences of LGBTQ students on HBCU campuses.

“The objective that we are going to hit throughout this presentation is to describe challenges that HBCU environments present for LGBTQ students and their mental health," said Durbin. "Next is to identify the personal, interpersonal and organizational strategies for resisting this heteronormativity on HBCU campuses.”

While HBCUs have historically been at the forefront in championing controversial issues within the Black community, "many have long struggled with the reputation of being unwelcoming if not overtly hostile to gays and lesbians, and we would also include in that, folks who have trans experience or who are gender non-conforming or even sexually fluid or gender fluid,” Durbin added.

Durbin said that he attended Morehouse because he wanted to be in an affirming environment. He said he was able to grow within his Blackness and see that Black men are not a monolith. However, when he was preparing to run for Mister HBCU (a leadership honor), he felt he had to conform to certain heteronormative standards.

“It can cause anxiety. It can cause various amounts of pain mentally for students,” Durbin said. “I saw other student leaders that were struggling to be their full authentic selves."

Green said that thinking should shift to creating greater inclusion and mitigating harm.

“Naming it is about how we acknowledge what the body is telling us so that we can then respond to the intersectional stress of racism and heteronormativity,” said Green. “It really requires that we give voice to how it is that we are being injured.

On the second day of the conference, Dr. Raé Nicole Lundy, a clinical psychologist and associate vice president of Wiley College, and LaMar Scott, assistant director of admissions at Wilberforce University, focused on the anxiety that many college students face.