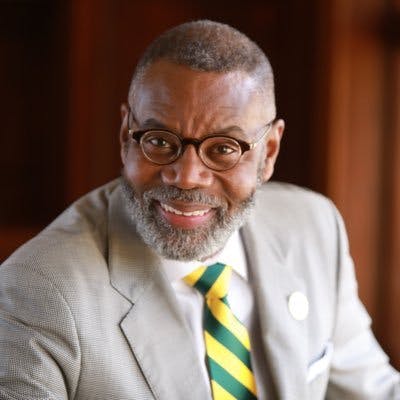 Dr. Elfred Anthony Pinkard, president of Wilberforce University, the first private HBCU in the countryWilberforce University, the country’s first private historically Black college that once was a stop on the Ohio Underground Railroad, garnered national attention last summer when its president, Dr. Elfred Anthony Pinkard, stunned the graduating class of 2021 during commencement.

“Therefore, the Wilberforce University Board of Trustees has authorized me to forgive any debt,” said Pinkard to that day’s graduates. “Your accounts have been cleared.”

The classes of 2021 and 2020 had their debt to Wilberforce wiped clean. The room burst with applause at the news, and the video of Wilberforce's commencement went viral.

“I must tell you, and this may sound naive, but we really didn’t expect to get the kind of coverage that we got,” Pinkard told Diverse. “It just exploded. If you saw that clip, that’s exactly what I had intended. I wanted that visceral joy of students really seeing your institution cares about you.”

About $375,000 in student debt owed to Wilberforce was erased. Wilberforce had received support in part from the United Negro College Fund, a philanthropic organization that provides scholarships for Black students and general scholarship funds for 37 historically Black colleges and universities (HBCUs). The university also used some of the federal funding it received through the American Rescue Plan Act of 2021. Graduates remained responsible for paying their federal, state, or private loans, yet their debts to Wilberforce were gone.

“The impetus was that these classes had soldiered through COVID,” said Pinkard. “These were the young people who were consistent through that difficult time. So, we asked ourselves what we could do.”

Many of the graduates who had their debt forgiven have gone on to graduate and professional schools. Their sense of relief was palpable.

“I couldn’t believe it when he said it,” said Rodman Allen, a 2021 graduate of Wilberforce. “I know God will be with me. I’m not worried. I can use that money and invest it into my future.”

"That sent a strong message as to how valuable the students are and how seriously Wilberforce is taking their futures," said Reverend Nelson B. Rivers, III, vice president of religious affairs and external relations at the National Action Network, a civil rights advocacy organization, and a Wilberforce graduate. "It got us a lot of splash, but the most important part was the benefit to the students. They didn't know it was coming. It was like hallelujah to them."

Rivers is on the university's Board of Trustees and served as president of Wilberforce's alumni association from 1994 to 1998. He recently created an endowed scholarship fund at Wilberforce to help students. To Rivers, the university has weathered many storms only to emerge each time even stronger than before, particularly today.

Wilberforce is a rural campus in Ohio that is affiliated with the African Methodist Episcopal Church. The university enrolls more than 700 students, and it had a $6.7 million endowment at the end of the 2019 fiscal year. Pinkard and Rivers said that to understand Wilberforce’s present and ambitions, one needs to recognize its past.

The University was founded before the Civil War, at least a decade earlier than many of the more well-known HBCUs like Howard University were started. The scholar Dr. W.E.B. Du Bois even taught there.

“As the first private HBCU, Wilberforce really occupies a rarified position within American higher education and certainly Black higher education,” Pinkard said. “I can tell you that I am always, always greeted by someone who tells me my auntie or someone they know went to Wilberforce. It just blows me out of the water.”

Wilberforce was also the first college owned and led by African Americans. In 1863, after the Civil War temporarily closed Wilberforce, the university reopened with Bishop Daniel Payne as president. Payne became the first Black president of an American institution of higher learning. He wrote a book about his time as president, and Rivers has two copies of the work on his shelf.

When reflecting on what has made Wilberforce survive and thrive over the years, Rivers remembered a moment in that book when Payne described how he bought the university at an auction in Cincinnati to spare it from shutting down. The bishop bid about $10,000 on the institution "in the name of God and the African Methodist Episcopal Church," recalled Rivers. But Payne only had about $10 in his pocket. He won the university and raised enough money in the next few years to pay back the bid.

"Wilberforce has been under the hand of God from the beginning," said Rivers.

Yet Pinkard noted that Wilberforce and other lesser-known HBCUs today can often be overlooked in the media. The widespread coverage of Wilberforce’s 2021 commencement was rare.

“There are about 107 HBCUs out there doing exciting work, but only a handful of them get the attention consistently,” said Pinkard.

However, Wilberforce may be having a renaissance of its own after weathering another round of storms.

Before the pandemic upended higher education, the university’s very existence was threatened. In June 2018, after Pinkard became president in March of that year, Wilberforce was placed on probation by an institutional accreditor in higher education, the Higher Learning Commission. The university would remain accredited, but Wilberforce was in jeopardy of losing its status if it did not remedy the issues that had prompted the sanction, particularly its financial management.

“You might say, what happened?” said Pinkard. “Over the years, there have been a number of challenges, and I think we are just now coming out of some difficulties having to do with a number of things, including turnover in presidencies. There is a story here.”

Because in November 2021, a few months after Pinkard announced the classes of 2020 and 2021 would no longer be in debt to Wilberforce, the Higher Learning Commission lifted its probation on Wilberforce. Pinkard breathed a sigh of relief.

“That has been a sort of albatross for the university for many years,” said Pinkard. “That was one of the first things that I inherited. Now with every presidency, the most appropriate and truthful thing to do is to say this is my problem now. You assume responsibility and go to work to solve it. And that’s what we did.”

Pinkard pointed out that part of improving the institutional health of Wilberforce meant changing the culture of quality assurance, putting stronger policies and practices in place, and showing the evidence that concerns were being addressed.

“And it broadly meant applying a rigor to everything at the university,” said Pinkard.

He added that it was especially difficult to fundraise and enroll more students with the probation at Wilberforce, though the university was still accredited. “But we always had a laser focus on getting ahead of this and beyond this.”

With the probation lifted, Pinkard said that he is hopeful Wilberforce has a chance for a “different narrative” in the public’s imagination. The news to him will send a message that “there is good work going on here.” Because despite Wilberforce’s remarkable past, Pinkard noted that “history doesn’t win the day if you’re not in full compliance with all the data.”

"The cream always rises," said Rivers on Wilberforce's recent path. "Excellence always makes it. And we are now stronger."

As for what comes next, Wilberforce has a strategic plan in place and will be especially focused on preparing students for graduate school or their careers right after college.

The university is working to develop a nursing program to meet community needs that the pandemic brought to the fore. In addition, Wilberforce is growing its degree completion program aimed at working adults given that demographic is a rising student population.

Also, Wilberforce designed a master’s program in rehabilitation counseling that includes cultural sensitivity training. As an HBCU, Pinkard pointed out that Wilberforce is well positioned to train clinicians who are skilled at working with marginalized populations but may not have had access to these professions before. Ohio has continued to suffer from opioid addiction and substance abuse, which makes the regional need for such programs high.

“We want students to really think of themselves as thought leaders and change agents,” said Pinkard. “That goes back to how we’re connecting our history with our present and our future. We relied on self-agency way back when Wilberforce was founded. That early history is embedded in Wilberforce moving forward.”