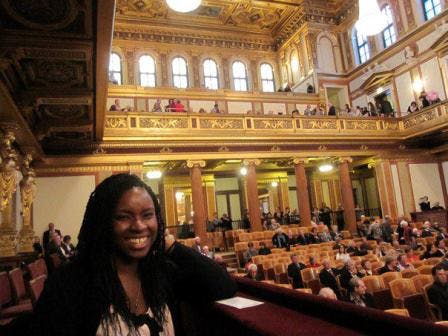 Laquisha Springer, a 21-year-old behavioral neuroscience major at Connecticut College, said, “I do not believe that there was a moment that I did not learn something new from studying abroad.”

That’s what the 21-year-old behavioral neuroscience major at Connecticut College said regarding the semester she spent earlier this year at the Danish Institute for Study Abroad in Copenhagen.

“I never felt so alive until I took risks, had engaging conversations with people [with whom] I seemingly had nothing in common, explored a new city, ate food I had no idea what it was, and took classes from professors who have had experience in their field,” Springer wrote of her experience in Denmark.

“I stepped and was gently nudged outside of my comfort zone,” Springer said. “I do not believe that there was a moment that I did not learn something new from studying abroad.”

Springer got her study abroad experience through a little-known partnership between the U.S. State Department and the Shawn Carter Scholarship Foundation, the charitable organization of the mega rap superstar and entrepreneur better known to the world as Jay Z.

More specifically, Springer was one of four students to receive one of the Shawn Carter Foundation-Gilman International Scholarships through the U.S. Department of State’s Bureau of Educational and Cultural Affairs.

The Institute of International Education, or IIE, administered the scholarships in a one-year pilot partnership that was announced earlier this year but has generated surprisingly little publicity since.

In a society where philanthropic support for socioeconomically disadvantaged students in higher education is often seen as the province of rich White men, the Jay Z study abroad scholarships stand out as a refreshing departure from that norm.

Springer said it was “inspiring” to get financial support for her educational endeavors from a wealthy figure who hails from a background with which she can relate.

“It makes me proud, you know, to know that someone who is relatively close to my age and someone I can relate to who’s had to struggle to get to where he is, that he’s investing in my future,” Springer, who is from East Hartford, Conn., told Diverse. “That shows me that he believes in my future.”

Meghann Curtis, Deputy Assistant Secretary for Academic Programs at the U.S. Department of State’s Bureau of Educational and Cultural Affairs, said the Shawn Carter Foundation “reached out to us and our partners” at IIE about a year ago to see how the foundation could support Gilman Scholars, which is the department’s flagship study abroad program. Curtis said she did not know specifically who made the contact and to whom.

Asked about the potentially negative optics of the relationship between Jay Z and the State Department, given Jay Z and his singer wife Beyonce’s recent controversial visit to the Communist nation of Cuba, where travel for Americans is restricted to educational, humanitarian and a few other select purposes, Curtis said the Jay Z/Beyonce Cuba trip was a private matter and referred all questions about it to the U.S. Treasury Department, which approved the trip.

Jay Z has also been criticized recently for his remark that “my presence is charity” in response to longtime civil rights activist and entertainer Harry Belafonte’s criticism that Jay Z and other contemporary Black artists were not doing enough in the realm of social responsibility.

The critics have largely neglected to examine the work of the Shawn Carter Foundation, which last year financed 188 scholarships in addition to the four study abroad scholarships through the Gilman scholars program.

Efforts to reach representatives at the Shawn Carter Foundation in Miami, Fla., were not successful.

No one at the foundation is getting rich off salary. The highest paid and single full-time employee was the executive director, Dania Diaz, who was paid $62,500 in 2011, the records show.

Springer — who is also a regular Shawn Carter Foundation Scholar in addition to getting the study abroad scholarship — said she had never lived outside Connecticut until she studied abroad. She said she never would have been able to make the trip abroad, as the airfare alone from New York to Denmark cost over $1,000. The Carter-Gilman scholarships were for up to as much as $12,000.

Studying abroad is a relatively uncommon experience for Black students.

Black students represented just 4.8 of all study abroad students in the 2010-11 academic year, according to IIE, although the Black population in the U.S. is 13.1 percent.

The Gilman Scholarship Program seeks to turn those statistics around. A description of the program says the program “diversifies the kinds of undergraduate students who study abroad and the countries and regions where they go.”

While staying in Copenhagen, she participated in study tours to other European locales. For instance, her class met with psychologists in Milan. And for a class on composers from Vienna, her group attended a symphony orchestra performance at an opera house in Vienna. They also went to a music museum to study the physics of hearing.

For a psychology class, she and other students did an exercise on fostering happiness where they were given an hour to figure out the best way to make people happy with 10 euros.

“It was really interesting to see people’s reactions,” Springer said of the exercise in which students purchased and handed out items to people that could potentially “make their day,” from snacks to roses.

Springer said she has heard the criticism of Jay Z as not being socially responsible. As one who has benefitted directly from the Shawn Carter Scholarshp Foundation, she tries to keep it all in perspective.

“I mean, it probably doesn’t help that his net worth is almost at $1 billion,” Springer said. (Actually, celebritynetworth.com places Jay Z’s net worth at $500 million.)

“So I’m assuming people, when they say he’s not doing enough, they’re expecting him to literally help the world,” Springer said. “But for me, personally at least, his foundation has helped me out at lot since I’ve been a scholar.”