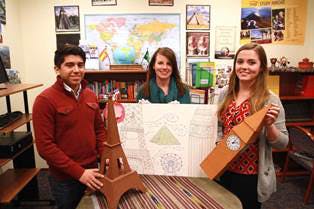 Alderete is the only daughter of a single mom who suffers from severe arthritis. She helps take care of her mom and also chips in for gas and grocery expenses. To help pay the bills, she took a job at a big-box store about 30 minutes from the campus. To increase her earnings, she considered a job at another Wal-Mart that would have required her to work all night.

Instead she took a different course. She spoke to the university and they found her a job on campus as part of a strategy to keep her focused on getting her degree. Today, Alderete is on track to graduate from UTEP next May.

In recent years, UTEP, a school that’s about 80 percent Hispanic, has received national attention for its work at retaining students and graduating far more than expected. Alderete’s story illustrates why the school has been successful in its retention efforts.

University officials say they accomplish this by rigorously analyzing their own data to help students earn degrees. Officials say they seek to address possible hurdles in students’ personal lives that may impede their success, such as a lack of financial literacy. The school uses various interventions, including a class that helps newly matriculated students adjust to university life.

Faculty members are also expected to meet with students who have 30 credit hours prior to graduation to ensure that they are taking the right classes and that there are no roadblocks to graduation.

“At UTEP we help students move out of poverty,” says Dr. Gina Nuñez-Mchiri, an associate professor of anthropology at UTEP who has won awards for her teaching.

Dr. Gary Edens, vice president for student affairs at UTEP, says the school has been successful for a variety of reasons, including stable management (President Diana Natalicio is in her 26th year); a decision to partner with other colleges rather than compete with them; a rigorous analysis of data to track student success on test scores and progression rates; and a desire on the part of the president to focus on serving the population in that area.

“She quickly realized when she became president that many students were not taking advantage of what we had and that we were not representing the students we were supposed to be serving. Our student body is now much more reflective of the population we serve. We’ve had a 20-year head start in working with this growing population,” says Edens.

Antonio Flores, president of the Hispanic Association of Colleges and Universities, describes UTEP as a model school among the nation’s 370 Hispanic-serving institutions. He agrees that having the same chief executive for more than a quarter of a century has been beneficial for the college.

“That speaks to continuity,” says Flores. “It will show better results over time.”

Flores also notes that “one of the things they’ve done quite well is engaging the community and improving educational outcomes.”

Edens says that the university’s location drives much of its creative approach to recruiting and retaining students.

“We are a little bit unique, in the sense that we are isolated but quite large, so we have to be collaborative,” he says.

UTEP officials say they don’t take for granted the school’s position as the only traditional four-year university in El Paso. They work closely with the public school districts in the area and El Paso Community College on issues such as matriculation of working-class students and preparation for college.

For two decades, says Edens, UTEP, the community college and the school districts have shared data with each other in an attempt to help guide decisions involving issues such as curriculum and academic preparedness.

As part of a strategy for introducing high school students to the college experience at an early age, El Paso Community College, in collaboration with the school districts, offers an early high school college program.

In this program, students are afforded the opportunity to take classes at the community college while still in high school. Each year hundreds of students like Alderete graduate with simultaneous high school diplomas and associate degrees before heading to UTEP, getting a two-year head start on a bachelor’s degree. There are six programs of this kind in El Paso.

Dr. Donna Ekal, associate provost for undergraduate studies at UTEP, says some of these high school students complete their associate degrees as juniors and enroll at UTEP as seniors.

“It’s a great pathway for a lot of students,” Ekal says.

Edens says 40 percent of UTEP’s students come from homes where household incomes are less than $20,000 a year. He says that fact presents the university with an opportunity for outreach in a community where many young people are unlikely to consider college.

Edens says that is where the collaboration with the community college plays a vital role. “What we decided to do is take the attitude that it’s not important where they go to college but that they are going,” he says.

UTEP officials say they work hard at attacking the barriers that affect student success or that force some to drop out of school altogether. In recent years, they’ve tackled some of the internal hurdles, such as transitioning from high school to college, by developing a special three-hour core course for freshmen. The course helps them with matters like time management, library usage and accessing resources on the campus. Each class is limited to 25 students who are overseen by a team made up of an instructor, a librarian, an adviser and a peer leader.

The class, says Edens, quickly becomes a support group for these new students.

University officials say that because a large percentage of their students come from lower-income backgrounds, many have obligations to help out at home financially.

“The majority of our students get Pell Grants. Most work. When you are contributing financially to your household, frequently the short-term (solution) wins,” says Ekal. “The long-term implications are that the classroom work suffers.”

To help alleviate some of the financial hurdles, Edens says UTEP has worked aggressively to create employment opportunities on campus.

Edens says that this approach has had some positive unintended consequences.

“What we’ve realized is that when we started doing this our graduate student numbers increased,” he says.

He adds the university also tries to work with students on issues such as financial literacy.

“Many of them are very loan averse. Some go to school for a year and then take a year off to work so they can raise money to pay for the next year,” he says, adding that they explain to students how finishing up their degree early could save them money and make them more productive, high-earning citizens.

Nuñez-Mchiri says the UTEP story provides an important lesson for a nation with rapidly changing demographics.

“We have Latinos going to college, but are they growing?” she asks. “As a nation, we can’t let go of the dream of how education transforms us and moves us out of poverty. The demographics are here, whether people accept them or not. We don’t want to throw away children. We need to invest in them.”