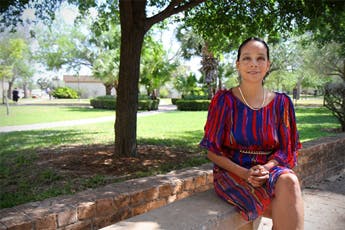 Dr. Guadalupe Correa-Cabrera advises new faculty members: “Be always flexible and open to changes; opportunities will come if you have your eyes wide open.”

A Diverse 2015 Emerging Scholar, Dr. Guadalupe Correa-Cabrera’s research in border studies is designed to e­ffect change — in policy, in the narrative of border politics and in the lives of people on both sides of the southeast U.S. border with Mexico.

Born and raised near Mexico City, Correa-Cabrera grew up wanting to study economics, which led her to major in the field at the Universidad Iberoamericana in Mexico City.

But as organized crime, drug and human trafficking, and related violence along the border dominated the discourse, she decided to attend graduate school and study political science in the United States in order to focus on issues that were a­ffecting her country. This led her to the New School for Social Research in New York City, where she received master’s and doctoral degrees.

“I saw this drama in my nation and I decided to study border institutions,” she explains. “Through my research, I intend to understand the specific dynamics of border violence and transnational organized crime in Mexico and the Americas hemisphere in general.”

Correa-Cabrera says she also hopes to “propose security policies and other types of public policy to achieve stability and more prosperous and equal societies.”

Currently she is a tenured associate professor and chair of the Department of Government at the University of Texas at Brownsville. As a citizen of Mexico, a U.S. green card applicant and a resident of the economically distressed border city of Brownsville, Correa-Cabrera, 39, is living and teaching in the milieu of her research.

“Dr. Correa-Cabrera is a scholarly voice in both English and Spanish for people without voice — those who are oppressed by the violence and intimidation of drug cartels that vie for control of ‘plaza’ cities along Mexico’s border with Texas,” Dr. Ruth Ann Ragland wrote in a nomination letter signed by herself and the entire faculty of the Department of Government.

Correa-Cabrera says 90 percent of her students are Mexican American, and most of them, or their families, have experienced the e­ffects of current border policies. “It’s important for our students to understand U.S. immigration and security policies … how organized crime a­ffects immigration and energy policy. Living at the border and being a professor at a border institution … these issues are important to me and my students.”

Her 2010 dissertation, titled “Democracy in ‘Two Mexicos’: Political Exclusion, Economic Exclusion, and (Un)civil Modes of Political Action in Oaxaca and Nuevo León,” analyzed these issues, and much of her subsequent work, she says, has focused on organized crime.

A book in progress, tentatively titled “Los Zetas Inc.: A Criminal Transnational Corporation, Mexico’s Energy Sector, and a Modern Civil War,” she explains, “deals with border violence beginning with the creation of the brutal Zetas criminal organization along the Texas border with the Mexican state of Tamaulipas.”

Her work has been rewarded and supported by numerous institutions, including with a Fulbright Fellowship and a research fellowship at the Freie Universität Berlin (Free University of Berlin).

She also has made presentations on the impact of social media and the use of citizen journalists in reporting border crime after violence and intimidation silenced traditional media.

Correa-Cabrera’s work is not only groundbreaking but brave. She is an outspoken critic, even appearing in a YouTube video in which she discusses the drug trade, as well as human and arms trafficking in northern Mexico and the role that policies on both sides of the border play in the criminal activity.

Although she says the problems are complex, Correa-Cabrera says, “… While there is cooperation between the United States and Mexico, they need to talk more and the conversation needs to be more bilateral than unilateral. There needs to be more shared responsibility.”