Dr. Megan Neely, an assistant professor of biostatistics at Duke University who recently emailed students requesting they speak “English 100 percent of the time” while in campus facilities has apologized for her email, noting that it was inappropriate. She also stepped down from her administrative position.

“I deeply regret the hurt my email has caused,” Neely said in a follow-up email recently sent to students. “It was not my intention. Moving forward, it is my sincerest wish that every student in the Master of Biostatistics is successful in all of their endeavors.” 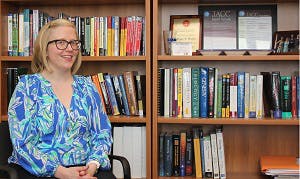 Neely’s original email sent to dozens of first- and second-year biostatistics Duke students on Jan. 26 said that two faculty members went to her office earlier that day, asking for images of biostatistics graduate students who were “speaking Chinese (in their words, VERY LOUDLY)” in study areas and in the student lounge, according to The Washington Post.

The faculty members wanted to record the student’s names so they could remember them if they ever “interviewed for an internship or asked to work with them for a master’s project,” she said in the email.

“They were disappointed that these students were not taking the opportunity to improve their English and were being so impolite as to have a conversation that not everyone on the floor could understand,” Neely added.

A statewide petition was created by “concerned” Duke students in response to the email, requesting the university to investigate Neely’s emails and the anonymous faculty members. As of Jan. 27, the petition had over 1,900 signatures.

“We are disheartened . . . when Duke’s faculty members implied that students of diverse national origin would be punished in academic and employment opportunities for speaking in their native language outside of classroom settings,” the petition said. “We are demoralized even more that a Duke graduate program director explicitly condones and even encourages such discriminatory practices by our faculty members.”