Earlham College – a private liberal arts school with Quaker roots – is home to about 1,050 students in Richmond, Indiana. This year, one of its seniors, Summia Tora, will be the first Afghan to win the Rhodes Scholarship, one of the most prestigious academic awards, which funds three years of graduate studies at Oxford University.

This is the second time an Earlham student has won. The school’s peace and global studies department produced two Rhodes Scholars in the last three years, and the students – Tora and Hashem Abu Sham’a – have something else in common. Both plan to study and work with refugees and were once refugees themselves. 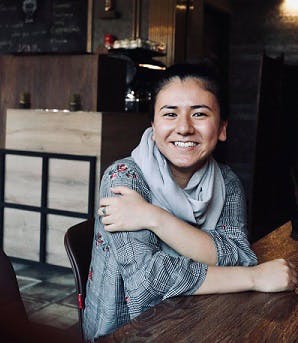 Tora, double majoring in peace and global studies and economics, grew up in Pakistan after her family fled violence in Afghanistan. She came to the United States at age 16 when she received a scholarship to study at the United World College in Montezuma, New Mexico, for the last two years of high school. There, she started doing advocacy for refugees and undocumented immigrants with Amnesty International. In college, she interned with Exodus Refugee Immigration in Indianapolis, where she worked closely with Burmese, Congolese and Afghan refugees.

The refugee women – many of them single parents – reminded her of her mother, who raised her and her siblings alone in Pakistan when her father returned to Afghanistan.

“I wanted to keep working in the field because working with displaced communities, there’s a sense of this belonging I feel, because I can relate,” Tora said. “When I speak to someone who’s experienced displacement, there’s a connection. You can’t have that connection until you’ve gone through it.”

But going to Oxford wasn’t an easy decision. When she applied, she wrestled with the Rhodes Scholarship’s colonial history. It’s a tension Abu Sham’a feels too, and the two of them discussed it when Tora came to visit Oxford. Cecil Rhodes, the scholarship’s namesake, was the British prime minister of a colony in South Africa.

Ultimately, both decided to apply and accept, following in the footsteps of other Rhodes Scholars who used their award to pursue social justice work.

“In order for me to change what Cecil Rhodes stood for, I think rather than running away from that legacy, it’s important for me to feel uncomfortable – and take that challenge of becoming part of a community that has a colonial legacy, but at the same time, challenge myself to actively try to work toward ensuring that we are actually addressing those social issues,” Tora said. 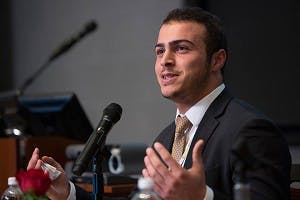 For the last two years, Abu Sham’a has been striving to do that work at Oxford. He earned the Rhodes Scholarship in 2017, one of the first two Palestinians to win the award as part of an inaugural Syria, Jordan, Lebanon and Palestine program.

At Earlham, he served as the president of student government, and in 2015, he was the first-ever youth representative of Palestine refugees at the United Nations. Now, he’s in the third year of his Rhodes Scholarship, where he completed a master’s degree in refugee and forced migration studies and is now working toward a doctorate in human geography.

His Ph.D. research focuses on contemporary Palestinian music which he uses as “a prism through which to look at economic and political landscapes in Palestine,” he said. For his fieldwork, he spent over three months in the region in cities like Ramallah and Haifa as well as cities and refugee camps in the West Bank.

As a Palestinian refugee himself, “it’s been a journey of vacillating between interrogating my own journey but also wanting to learn more about other experiences and add layers of complexity to that story,” he said.

Dr. Joanna Swanger, director of the peace and global studies program, described both Rhodes Scholars as examples of “humility and courage.”

“Both of them are fearless in terms of dealing with difficult ideas,” she said.

She doesn’t think it’s a coincidence that they emerged from Earlham College.

For one thing, the peace and global studies program is small – about 12 majors per year – so she and other faculty members offer “close, one-on-one mentorship,” she said. She pointed out that students call faculty by their first names as a part of the school’s culture.

She also credits the school’s Quaker values, including a “Quaker ethos of radical egalitarianism” and an emphasis on consensus building, a traditional Quaker decision-making method. In her department, this manifests in a final project where all peace and global studies majors need to choose a topic and work together on a presentation.

The school’s emphasis on consensus building offers a unique model of leadership, Swanger said, one that trains students in the “slow organic process of getting all voices at the table” and teaches them to “neither hold ourselves as immune from criticism or shy away from saying what needs to be.”

“Building consensus is a slow, laborious process, and when it’s done right, it’s a very difficult process,” she said. “When it’s done right, you understand you cannot ride roughshod over the views of a numerical minority and you cannot dismiss or simply marginalize dissent. You have to really take dissent seriously. We try to get students to understand that being wrong is not the end of the world.”

“These are things Summia and Hashem have confronted their whole lives,” Swanger said. “[Refugee students] have as much to teach as they have to learn.”

Abu Sham’a said Earlham’s peace and global studies program was his “natural home away from home” because of its emphasis on “bringing theory into practice.” His mentors there were a part of his decision to become an educator, he added, and his desire to combine that role with activism.

For Tora, Earlham College wasn’t her first choice. In fact, she was rejected by 10 colleges and universities in the U.S. before she applied. When she accepted a scholarship there, she expected to quickly transfer.

But she found herself appreciating the school’s principles of “activism, peace and justice, and community,” she said. Going to Earlham turned out to be “one of the best decisions I’ve made.”