Billionaire financier and philanthropist George Soros has announced that he is donating $1 billion for a new global university network that will support and train students, especially underrepresented populations, worldwide, to build more open societies where “free expression” and a “diversity of beliefs” become the norm.

The global network is called the Open Society University Network (OSUN), said Soros last week at the World Economic Forum in Davos. His Vienna-based Central European University (CEU) and New York’s Bard College will form the core of the new network. Soros called the new initiative “the most important and enduring project of my life,” and urged supporters worldwide to also contribute to this higher education collaboration, which he hopes will counter the rise of nationalism, “the great enemy of open society.”

Over the last 30-plus years, Soros has given more than $32 billion to education and social justice causes, according to his philanthropic arm Open Society Foundations. One of his first efforts, in 1979, was a scholarship program for Black students living in apartheid South Africa.

“This initiative seems very much in line with what Soros wants to do, in a positive way, to break down national borders and use international education to foster a more cosmopolitan world,” said Dr. Daniel Bessner, associate professor in American foreign policy at the University of Washington. “Hopefully this [donation] will augur a new transition to the return of funding for universities.”

Soros’ latest effort complements CEU, which was forced out of Hungary last year, reportedly for political reasons. OSUN’s chancellor is Dr. Leon Botstein, president of Bard. The two entities will partner with Arizona State University and other institutions around the globe, such as the American University of Central Asia in Kyrgyzstan and BRAC University in Bangladesh, said Open Society Foundations in a statement.

Bard has been the recipient of significant philanthropy from Soros for 25 years, and since 2011, has worked more intensively on building a network of undergraduate liberal arts institutions with a focus on underserved and underrepresented populations, said Dr. Jonathan Becker, Bard’s vice president for academic affairs, who now also serves as OSUN’s vice chancellor.

“The vision for OSUN is to work with colleges and universities across the U.S. and the globe that have a commitment to various forms of diversity,” said Becker. Bard in the U.S. has worked to reach underrepresented populations through work like its prison initiative and early college outreach, which is funded not just by Soros’ foundations, but by other philanthropic efforts as well. “Our commitment is to address social justice issues of populations and OSUN will further that.”

For OSUN, Bard is in touch with several universities across the U.S. in addition to higher education institutions in other countries. Soros stressed in his speech that OSUN’s partner institutions be committed to the ideals of academic freedom and free speech.

In his speech at Davos, Soros talked about the threat to free and open societies around the world. He criticized the leaders of several countries, including China, India, Russia, and the U.S., and said they are running increasingly repressive and dictatorial regimes. A spate of protests against such regimes across the world by students and the youth is the way “to confront nationalist dictatorships,” but that isn’t enough.

“I believe that as a long-term strategy our best hope lies in access to quality education, specifically an education that reinforces the autonomy of the individual by cultivating critical thinking and emphasizing academic freedom,” Soros said at Davos while announcing OSUN. 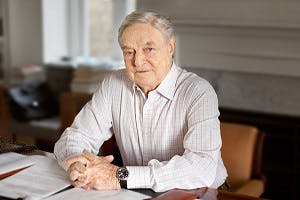 Like CEU, OSUN will have a strong focus on including the underrepresented in higher education around the world, or as Soros put it, reaching students “who need it the most.” He specifically mentioned serving neglected populations, such as refugees, incarcerated people, the Roma and other displaced peoples like Myanmar’s Rohingya. The network is also ready to start a “scholars at risk” program, which will connect “academically excellent but politically endangered scholars,” said Soros.

OSUN will be a teaching and research partnership between universities worldwide and will offer network courses, which are online and utilize faculty and other resources jointly, as well as joint degree programs. It is designed to bring together students and faculty from diverse countries and will emphasize “civic engagement” alongside academic excellence, the billionaire philanthropist said.

The first phase of OSUN is already underway. The network is currently holding common classes for students from several universities around the world that are already collaborating via CEU and Bard.  These institutions are sharing faculty and conducting joint research projects, said Soros. The second phase will look to expand to other qualified universities that want to join OSUN.

“We are looking for farsighted partner institutions who feel a responsibility for the future of our civilization, people who are inspired by the goals of OSUN and want to participate in its realization,” said Soros.“We can’t build a global network on our own.”