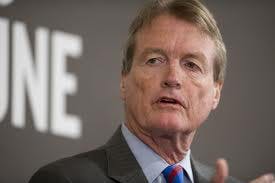 AUSTIN, Texas ― After years of clashes with Texas Gov. Rick Perry and the group that oversees the University of Texas System, the president of its flagship Austin campus reached a resignation deal that will keep him on the job until June 2015.

University of Texas President Bill Powers’ exit agreement comes after system chancellor Francisco Cigarroa met with Powers last week and urged him to resign effective in October or risk being fired. Powers offered to quit next June, a deal that Cigarroa accepted after Powers’ allies on campus and in the state Capitol rallied behind him.

Powers had pleaded to stay on the job to finish a $3 billion fundraising campaign, aid the startup of the university’s new medical school and help guide the university through state budget negotiations in the 2015 legislative session.

Powers said he met with Cigarroa and board chairman Paul Foster to reach the deal, which was announced by the University of Texas System at the same time a school provost told a faculty meeting.

“I’m delighted with this. This is a plan that makes sense to me,” Powers said.

Powers has led the 50,000-student Austin campus since 2006. He fought with governor-appointed regents over tuition and graduation rates and other higher education policies, and had survived previous attempts to fire him.

Powers has been a popular figure among students, faculty and state lawmakers, who rallied to his defense this week with warnings that firing him would harm the university’s reputation. Powers is chairman of the Association of American Universities, a consortium of top private and public research institutions. One alumni group had planned a pro-Powers rally outside the Board of Regents meeting Thursday, where his employment is still on the agenda.

On Monday, Cigarroa had described his relationship with Powers as “fractured” and cited a lack of trust between Powers and the regents. In accepting the deal that keeps Powers on the job another year, Cigarroa called him “an admired leader who, as I’ve said before, has advanced the University in many ways.”

Powers has had several high-profile clashes with Perry and the regents over higher education policies. One regent, Wallace Hall, is facing possible impeachment and removal from office over his relentless pursuit of university records and questions over Powers’ leadership.

Cigarroa recently called for an external investigation into Hall’s questions about whether Powers and some state lawmakers exerted undue influence over school admissions. The House panel investigating Hall had told the regents not to question potential witnesses ― including Powers ― during their investigation.

Hall did not immediately respond to requests for comment.

Perry, who has defended Hall, is not running for re-election, and Powers’ supporters had suggested the latest attempt to push him out was a last-ditch effort to fire him before the governor leaves office in January.

Cigarroa had denied any political motivations to get Powers out.

“It is, however, a time for an orderly change in leadership. While ultimately productive, the past years have not been without struggle and, at times, conflict and controversy,” Cigarroa said. “I truly believe that it is time for a fresh start.”

Cigarroa also is leaving. He announced his resignation last January, but his departure date has not yet been set.

In a statement, the Texas Coalition for Excellence in Higher Education said it was glad that officials “were able to come together and put the interests of our great university first by allowing a thoughtful, responsible and orderly transition of leadership.” The coalition, which was formed in 2011 to push back at some of Perry’s reform efforts and includes some of the UT’s top financial donors, has supported Powers.

Anne Neal, president of the Washington, D.C.-based American Council of Trustees and Alumni, said Powers’ resignation is the “right decision, but it comes too late.”

“When boards and presidents aren’t working together, it is time for a new leader. It would have been better for Texans and the university had Powers stepped down immediately and acknowledged the breakdown in communications and trust critical to a productive partnership,” Neal said.

Powers was dean of the Texas law school before becoming president and said he intends to return to teaching there.

“Being the president of the University of Texas has been the highest professional honor of my life,” Powers said. “I love the students, faculty and alumni. I’m indebted for their support.”