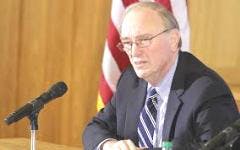 The newly consolidated school created as a result of a proposal by University System Chancellor Hank Huckaby will surpass the enrollment of the University of Georgia.

ATLANTA — The University System of Georgia Board of Regents has approved a proposal to merge Georgia State University and Georgia Perimeter College.

The board approved University System Chancellor Hank Huckaby’s proposal during a meeting Tuesday.

University System officials say the schools’ combined fall 2014 enrollment was 53,927 students. The consolidated university would become the largest in the state surpassing the University of Georgia, which enrolled 35,197 students in fall 2014.

Georgia Perimeter Interim President Rob Watts on Monday described the then-proposed merger as “an exciting prospect” and outlined steps that would be taken in the next year, The Covington News reported. Those include a steering committee, a website and teams formed to work through the practical and technical matters of the merger.

“This would create a new type of institution in the University System of Georgia: A research university that also has an access mission,” Watts wrote in an email obtained by the Covington newspaper.

“Should the Board approve this consolidation, we have the opportunity in the year ahead of working with the Chancellor’s Office and our fine colleagues at Georgia State University to create a new type of institution in the USG that continues our important mission, maximizes the opportunities for student success at all levels, values the work of employees, and increases operational efficiencies,” Watts wrote.

Georgia Perimeter, a two-year school, reported more than 21,000 students enrolled in the fall 2014 semester, with the full-time equivalent of about 15,400 students. It has campuses in Alpharetta, Clarkston, Decatur, Dunwoody and Newton.

Georgia State’s main campus is in downtown Atlanta. The university offers 250 undergraduate and graduate degree programs in its eight colleges and schools, according to its website.