After 11 years at the helm, Harvard University president Dr. Drew Gilpin Faust will step down at the end of the 2018 academic year. Her retirement will coincide with the conclusion of the record-setting Harvard Campaign, which has raised a historic $8 billion so far.

In a message to the Harvard community, Faust said that it was the “right time” for the institution to make a transition in leadership. 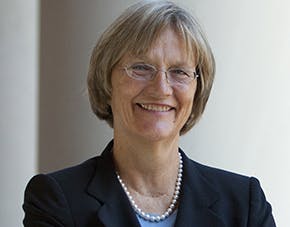 “It has been a privilege beyond words to work with all of you to lead Harvard, in the words of her alma mater, “through change and through storm,’” Faust said.

Born and raised in Virginia’s Shenandoah Valley, Faust is a historian of the Civil War and the American South. She was the founding dean of the Radcliffe Institute for Advanced Study, and the first woman to lead Harvard in its 380-year history.

She took up the mantle from Dr. Lawrence H. Summers, who presided over the institution from 2001 until his ouster in 2006. Summer’s term was marked by a series of controversies and friction with members of the faculty that included the public departure of Dr. Cornel West from the Department of African and African American Studies in 2002.

West, who left to teach at Princeton University and subsequently the Union Theological Seminary, returned to Harvard earlier this year.

Faust stepped into leadership just in time for the start of the global financial crisis and saw the institution through the difficult times that followed. Harvard is the world’s wealthiest school, with an endowment of nearly $36 billion administered by the Harvard Management Company.

In the 1990s, Harvard began growing its endowment, making billions over the years by investing in diverse markets, such as hedge-funds, private equity funds, agriculture and timber. After several years of extraordinary growth, Harvard’s endowment plummeted from $36.9 billion in 2008 to $26 billion in 2009, a loss of nearly 30 percent.

“While the crisis challenged every major research university, Harvard was particularly hard hit,” William F. Lee, senior fellow with the Harvard Corporation, said in a message to the Harvard community on Wednesday. “Drew acted swiftly and decisively to minimize exposure, curtail risk, and chart a disciplined and responsible course forward. She made hard decisions—and unpopular ones.”

At the time, Harvard relied on its endowment for 35 percent of its operating costs, and as a result, the $9 billion loss hit the institution hard. The administration found ways to trim its budget: slowing faculty hiring, cutting services, and eliminating hot breakfasts in cafeterias in the undergraduate House system.

Since then, Harvard has recouped its losses, launching the Harvard Campaign under Faust’s leadership in 2013. The campaign set out to raise $6.5 billion to fund a range of initiatives, including the renovation of undergraduate Houses, a new engineering campus in Allston, and expanding financial aid. A number of these initiatives were long-term goals that had been put on hold during the financial crisis.

When reached by email, Dr. Michael D. Smith, dean of the Faculty of Arts and Sciences, said, “President Faust’s exceptional leadership has strengthened every part of this institution and positioned Harvard well for the rapidly developing challenges and opportunities of our time.”

Smith led the College through the depths of the financial crisis, working closely with Faust.

Over the course of her tenure, Faust championed expanding financial aid and federal investment in science research. She also led the development of edX, a free online course and MOOC platform, in collaboration with the Massachusetts Institute of Technology and other institutions.

“For the last 10 years, she has approached every day with a singular purpose: to ensure that Harvard remains the preeminent academic institution in the world by constantly driving Harvard forward,” Lee said.