Phyllis Worthy Dawkins, who has served as interim president Bennett College since August 2016, was named as the historically Black school’s 18th president on Wednesday. 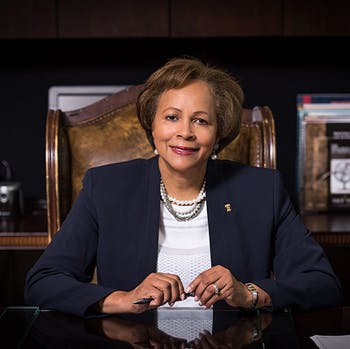 Dawkins had taken the reins of the women’s college in Greensboro, North Carolina when Rosalind Fuse-Hall resigned.

According to a statement released by Bennett, Dawkins primary goals are increasing enrollment and retention; strengthening academic offerings; increasing funding; strengthening the accreditation status; and revising, implementing and assessing the strategic plan.

“I have been thoroughly impressed with the students, staff and faculty of Bennett College since arriving in Greensboro in November 2015,” Dawkins said in the statement. “For years Bennett has been one of higher education’s best-kept secrets, but I plan to work in concert with the (Board of Trustees), faculty, staff, students and alumnae to ensure the institution’s visibility is raised.”

Prior to coming to Bennett she served as acting president of Cheyney University in Cheyney, Pennsylvania, where she was also provost and senior vice president for academic affairs. She has also worked at Dillard University in New Orleans and Johnson C. Smith University in Charlotte, North Carolina.