ATLANTA — It’s noon and Dr. Kevin E. James has already done two interviews and is gearing up for a third. James — the newly appointed interim president of Morris Brown College — is on a mission to restore the historically Black college to its glory days. 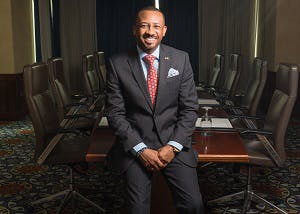 Those were the days when the private Atlanta-based institution founded by the African Methodist Episcopal (AME) church churned out civil rights leaders like Hosea Williams and Pulitzer Prize-winning writer James Alan McPherson.

Today, the 138-year old college has been struggling to stay alive, seventeen years after it lost its accreditation due to a financial mismanagement scandal.

But James, who started in March, has taken on a herculean task of reconnecting the college back to its central mission, where social justice was at the heart of the institution.

In the process, he is working hard to get the school accredited again, grow the student population and raise the necessary funds to keep the lights on and the doors open.

“It’s been my goal to be a college president of an HBCU for many, many years,” says James, who was sitting at home watching the news when he learned that Dr. Stanley Pritchett had announced his resignation. He immediately got in touch with the AME church to see how he could apply.

“Just knowing the history of all the ups and downs of Morris Brown, I felt that the school needed some youth and some energy,” says James, who has used social media to chronicle his efforts.

A motorcycle enthusiast, James will go anywhere to gain support for the college that many had assumed closed its doors when it lost its accreditation.

“People correlate being accredited with being open and so when we lost our accreditation in 2002, we literally went from about 2700 students to 70, literally overnight,” says James, the former CEO of 100 Black Men of Atlanta and, later, the interim CEO of 100 Black Men of America. “I’m going out into the community just telling the story, and letting people know that we’re open, we have students. People are like ‘Really? I didn’t know that.’”

Before graduation earlier this month, the school had 42 students and has steadied between 40 and 50 students over the past decade, largely drawing from the Atlanta metro area, although students have enrolled from as far away as the West Coast. The college currently offers three majors: music, psychology and organizational management leadership.

Because the school sold its dorms as part of a plan to exit bankruptcy, the handful of students like Desmond P. Scott, live in dorms owned by the International Theological Center — a consortium of five predominantly African-American denominational Christian seminaries that operate as a graduate school.

Scott — a California native — wanted an HBCU experience when he learned about Morris Brown from a friend.

“I had never heard of Morris Brown,” he says, adding that when he tried calling the school to learn more about its academic offerings, he could never seem to get through. When he did reach someone in the enrollment office, he learned that the school was not accredited and that he would not be eligible for financial aid.

Still, Scott — who had just finished two years at a community college — decided to apply anyway, and enrolled in classes in the fall semester of 2017 as a music major.

“When I heard what Morris Brown had gone through, that just struck a chord with me,” says Scott, who graduated earlier this month after serving as president of the school’s student government association. “It seemed more attractive to me. I wondered if I could add something given how committed the staff were to staying with little or no pay. That means you’re committed to making sure students learn and they are.”

His classes functioned more like independent studies, rare one-on-one opportunities to engage with his professors.

“One of the advantages of being here, is that I got tutored and taught at the same time,” he says, noting that the cost of tuition to attend the college was about $2,200 a semester. “And the professors don’t stop until you get it. They are called to it. It’s a rarity.”

Scott now has aspirations of going on to graduate school and has already been accepted into an MBA program at Texas Southern University.

Scott is an example, James says, that the school’s accreditation loss does not mean that students’ degrees are worthless. In fact, he points to a list of colleges and universities across the nation that have accepted Morris Brown students over the past decade. 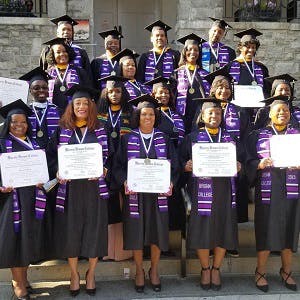 “I want to officially have an MOU with these schools,” he says, adding that recent graduates have gone on to use their degree to obtain jobs in the corporate sector.

Still, James knows that accreditation is essential if Morris Brown is to return to its glory days. The college is currently looking to the Transnational Association of Christian Colleges and Schools (TRACS) for accreditation. Given its founding and ongoing affiliation with the AME Church, TRACS — which currently accredits Paul Quinn College, an HBCU in Dallas — might be a viable option for Morris Brown.

Indeed, the interest in Morris Brown has never waned. Annually, the college receives about 400 inquiries from high school and transfer students. When the applicants learn that the school is not accredited, most go elsewhere — but some, like Scott opt to enroll anyway.

“We’re still a viable option,” says James. “People are still inquiring about us. Within three to five years, I believe the college will be accredited fully and we will be one of the top historically Black colleges in the country, educating the future leaders.”

If anyone can make this happen, it’s James, says those who have tracked his trajectory.

“I’ve known Kevin for 10 years and he has always been creative, energetic, innovative and driven by a larger purpose,” says Dr. Marybeth Gasman, the director of the Penn Center for Minority Serving Institutions at the University of Pennsylvania and an expert on HBCUs. “When he told me he wanted to lead Morris Brown College to success, I knew he was the one to do it. He has experience, great relationships across the board and the will to do it.”

James, a native of Columbia, S.C., originally enrolled in South Carolina State University as a music major but later transferred to Winthrop University, where he graduated with a degree in communication disorders and social science. He later earned a master’s degree from Troy State University and a doctorate in higher education from NOVA Southeastern University.

Shortly after taking the helm, James — who currently has a team of about 30 faculty and 10 staff — put out a call to alumni who hold master’s and doctoral degrees to consider volunteering to teach.

The effort was aimed at cutting cost.

The response, he says, has been overwhelming. More than 75 applied.

It’s an example of the kind of loyalty that Morris Brown alums have for their alma mater, he says.

For James, his devotion toward Morris Brown College is rooted in the school’s history and its long commitment to social justice.

“The culture,” he says, is what makes Morris Brown and other HBCUs like it special. “Individuals wanting you to genuinely succeed … and the data has been very clear on how HBCUs have touched this country and the middle class. What we do is critically important for this country.”