However, being the “first” in a leadership role was not uncharted territory for her.

While working at The Citadel, The Military College of South Carolina, Book became the highest-ranking woman in the school’s history after being named the first female provost and dean.

“I thought it would be exciting to be a first, that it would be an important adventure,” says Book. “I recognize that when I’m working, there’s a lot of visibility to it because of the gender, being the first. People are watching, particularly other women and female students. It’s a great opportunity and it also comes with that additional responsibility.” 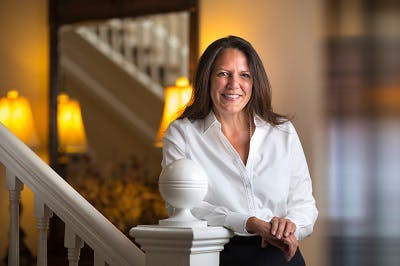 Book started her career in another male-dominated field at the time: journalism.

After noticing only male news anchors on the screen, she turned to her father and asked if “girls were able to do that.”

“He said that I could be whatever I wanted to be when I grew up,” says Book. “And I was grateful for that because that stuck with me and I always thought I could be a journalist.”

She strived to be like Dan Rather and Walter Cronkite and earned her bachelor’s degree in journalism from Louisiana State University.

Upon graduating, she became a reporter at a TV station in Baton Rouge, Louisiana.

However, after consistently asking her news producer for more time on her stories, Book was told that she should produce documentaries.

She decided to pursue a master’s degree at Northwestern State University. In order to have her tuition deferred, she was required to have a teaching assistantship and was placed in the journalism department.

“I taught a few classes and realized how much I liked it,” she says. “My dad was a teacher, several of my siblings were teachers. Teaching has been in our family’s DNA so I wasn’t really that surprised that I liked teaching so much.”

Book realized that she could take her passion for teaching and make a career of it.

In 1999, she became a faculty member at Elon, teaching news media and production.

Book served as the associate dean of the School of Communications. During her time as dean, she helped establish Elon’s Study USA program in Los Angeles and New York geared towards communications majors. She also worked toward getting the school accredited.

In 2009, she was given the Outstanding Service and Leadership Award by the North Carolina Association of Broadcasters due to her assistance with the state’s transition to digital television, according to the university.

After 16 years of working at Elon, Book eventually transitioned to The Citadel in 2015 to pursue other leadership opportunities.

“It was a chance to go to a very historic, very different kind of organization from Elon in [an] attempt to lead excellence and change,” she says. “I found it to be an exciting opportunity and I learned a lot about working in a very different culture.”

In 2018, Book returned to Elon, this time transitioning into her new role as president.

One key habit she picked up from The Citadel that has since translated into her time at Elon has been reading multiple newspapers and magazines each morning for an hour before work.

Dr. Steven D. House, Elon’s executive vice president and former provost, believes Book was chosen as president for “being innovative, being hardworking, relating well to people, being a great teacher and understanding Elon and the culture of Elon.”

House found that because Book grew up in a large family, she knows how to handle tension and issues that arise at an academic institution.

“She has inherited an institution that had a very positive trajectory and was accomplishing good things and has added her touch to that, her direction and has furthered that trajectory to make Elon even a better place than it was when she came,” he says.

Since becoming president, Book has made it her priority to interact and spend time with students on campus. Every Tuesday, she participates in a 7 a.m. walk when students, faculty and staff converse around campus. Additionally, a few Fridays a month, she plays table tennis with students.

Although she no longer has an active role in journalism, Book has found her communications background to be beneficial in her current leadership position.

“I think communications is essentially the work I’m doing today too, much of my job is about processing ideas from the community and communicating Elon’s vision in higher education, what makes us a distinctive university,” she says. “So that skill set has really altered my time at Elon before and my time at The Citadel.”

“Elon needs to continue to advance the infrastructure to support the differences among our students, faculty and staff so that each member of the community feels included and that their experience here is an equitable one,” she says. “It’s on my mind and my heart that they have been fully, equally admitted to the university and I want them to fully and equally have an Elon education.”

She also wants to further grow the science, technology, engineering and mathematics (STEM) program and ensure that each student graduates with a constellation of mentors.

Since her inauguration, Elon was ranked as one of the top 100 national universities for the first time by U.S. News and World Report’s “Best Colleges.” Additionally, Elon was named number one for study abroad and number two for undergraduate teaching.

In terms of Book being the first female in multiple aspects of her career, she acknowledged that there have only been a few times where she noticed being one of the few or only woman in the room.

The Citadel, for example, has a student population that’s almost 92% male, according to the university website.

Book recognized that there is a lot of learning involved being the first woman president since there is no one before her to look to.

“I’m excited to have this opportunity,” she says. “In a lot of ways, it’s nice that no one has done this before me because I can kind of make it my own. I’m not going to do it perfectly every day, but I am going to learn something new every day that helps me the next day.”