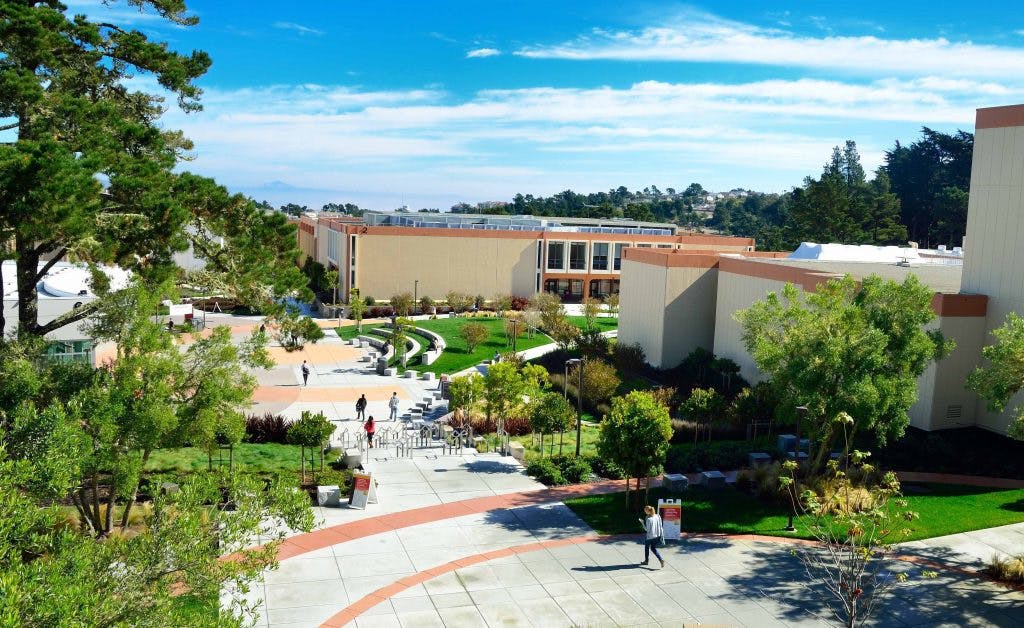 Skyline College, a community college in CaliforniaIn 2006, Marjorie Blen was required to take remedial math and English courses at Contra Costa Community College in California. The courses cost her time and money but did not earn her transfer-level credit toward a degree.

As Blen struggled to balance work and school, she said these courses grew discouraging semester after semester, feeling more like a trap than a ladder. In 2012, Blen left Contra Costa, still without her degree.

“I didn’t understand why I was stuck in remedial courses, but another friend wasn’t when we grew up together, taking the same high school classes and getting the same grades,” said Blen, who is a Latinx first-generation student. “Then I got pregnant and became a statistic: a young Latina with a child and no college degree. As a young person in the Bay Area trying to raise a kid, I couldn’t understand what was happening to me.”

Locked out of job opportunities while raising a family, Blen in 2017 re-enrolled in the community college system at the City College of San Francisco (CCSF). Again, she was put into remedial courses, but this time Blen pushed back.

Blen got involved in Students Making a Change (SMAC), a student-led advocacy group at CCSF calling for remedial education reform. Through SMAC, Blen found out about a state law called Assembly Bill 705 (AB 705) that passed in 2017, the same year she started at CCSF.

AB 705 outlaws community colleges in the state from requiring students to take remedial English or math courses without considering their high school GPA and coursework as well as determining that these students are “highly unlikely to succeed” in transfer-level, credit-bearing courses.

Before AB 705, about 80% of California’s incoming community college students started out in remedial courses. Their transfer and degree completion rates were roughly half that of students who began in transfer-level courses. Black and Latinx students like Blen were disproportionately enrolled in remedial courses as well.

Many experts and advocates point out that these remedial courses aimed to help students but ended up hurting them while widening racial inequities.

Armed with AB 705 in 2017, Blen pressed her college to let her take a transfer-level math class.

“I can tell you this much: I don’t know why they bar students from taking those classes,” said Blen. “The teacher was very supportive and flexible without changing the goals of the course. During the final exam for that class, I didn’t have a babysitter for my kid, and the teacher said I could bring my kid to sit in the hallway while I took my final. I ended up with a B.”

By fall 2019, community colleges statewide were required to comply with AB 705. Advocates say gains have been made. One-year completion rates of transfer-level courses in English jumped from 49% in fall 2015 to 67% in fall 2019. And rates for finishing transfer-level math classes went up from 26% to 50% in the same time period.

However, AB 705 has been implemented unevenly and remains split along racial lines. A December 2020 report from Public Advocates and the California Acceleration Project (CAP), both research and advocacy groups, found that community colleges serving over 2,000 Black students were more than twice as likely to be weak implementers of AB 705 in fall 2020, the second year of the law going into effect.

“We found that AB 705 did a lot to lift the barrier of mandatory remediation, which was our status quo, but it had some gray areas so that colleges who didn’t want to stop remedial courses kept enrolling large numbers of students in these courses,” said Dr. Katie Hern, co-founder of CAP, a faculty-led network to reform remedial education and boost student completion rates.

Hern is also an English instructor at Skyline College, a California community college. She used to teach remedial English courses, yet when she took a closer look at the data, she realized that something was wrong.

This week, advocates are calling on reforms to tighten implementation of AB 705. On Tuesday, California’s Assembly Higher Education Committee heard arguments on Assembly Bill 1705 (AB 1705). The proposed legislation includes clarifying that community colleges must enroll students in math and English classes where they have the greatest likelihood of completing degree and transfer requirements.

However, some AB 1705 opponents say that the bill does not include enough academic support for faculty to help new waves of students entering transfer-level rather than remedial courses. That could create another problem, critics argue.

“We believe that additional academic support is needed to make this bill work,” said Evan Hawkins, executive director of the Faculty Association of California Community Colleges (FACC), which did not take a position on AB 705 but opposes AB 1705. “We feel that this bill is a lot more prescriptive in its legislative language on what colleges can and cannot do than AB 705 was.”

Hawkins pointed out that many FACC members are concerned as a result that “we’re being asked to do more with less.” Instructors are expected to reach a broader range of students, yet without more funding for smaller class sizes or to embed tutors in classes to meet student needs. He added that if the bill included rather than rejected such funding, then FACC may decide to support AB 1705.

“Folks on the other side of this issue may say that we want to go back to the status quo before AB 705, and that’s not the case,” added Hawkins. “Our position is more nuanced than that. We don’t want to go back to the way things were before. But we are worried that this will be setting our faculty up to fail.”

“It is true that some students are coming out of high school not well-prepared for college,” said Hern. “That’s just true. But what’s also true is that those students are very capable. And what we need to do is support them to be successful, but not in a structure that puts them behind other students, which is what remedial classes do.”

Now Hern and fellow advocates encourage co-requisite courses as a more effective path than remedial classes. Co-requisites provide additional support to students, such as peer tutors or more time with the instructor. Yet students still earn credit for the course.

When asked how much money she spent on remedial classes over the years, Marjorie Blen said, “I would own a house by now.” Today, she is the director of SMAC, raising awareness among students about transfer-level, credit-bearing courses so that others don’t fall into the same cycle she did more than a decade ago.

In May, Blen will graduate from San Francisco State University with her bachelor’s degree after having transferred to the institution. She has been considering graduate school next, which she would “never have dreamed of before.”

As for AB 1705, advocates and opponents are watching closely for what comes next.

“We’re hoping AB 1705 will make it out of the Higher Education Committee, then it will pass to appropriations,” said Jetaun Stevens, senior staff attorney at Public Advocates. “We’re just tracking the bill and will continue to do advocacy around making sure people understand how important this is for students.”