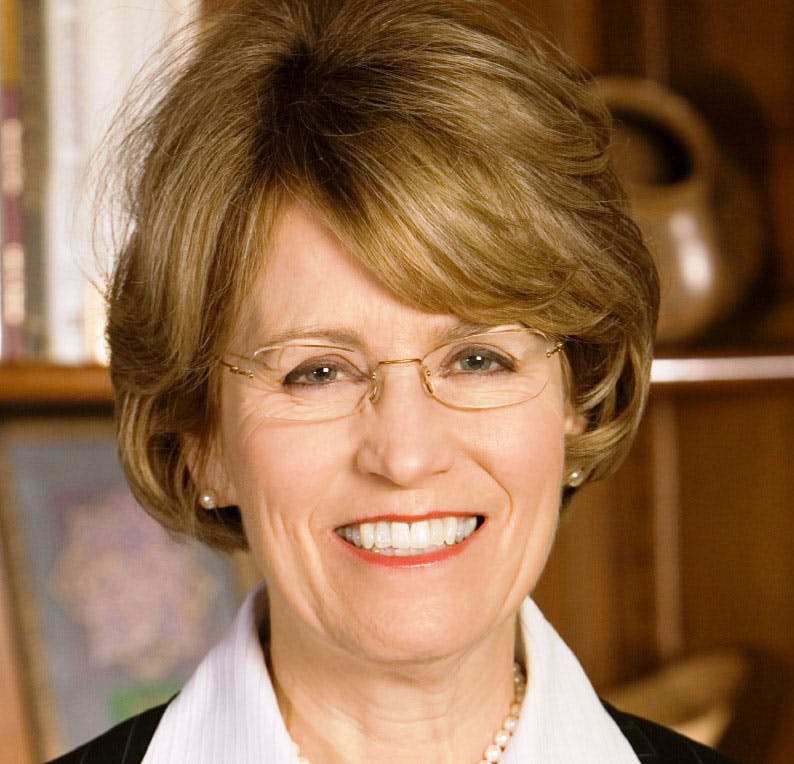 Dr. Mary Sue Coleman is president of the University of Michigan.

WASHINGTON – With the U.S. Supreme Court soon expected to hear arguments in an affirmative action case, two leaders of public colleges and universities outlined their strong support for the continued use of race as a factor in admissions at a Washington, D.C. forum on Wednesday.

“I’m a huge believer in affirmative action,” said Dr. Mary Sue Coleman, University of Michigan president, at the National Press Club forum. Although Michigan has banned the use of racial preferences in the state, she said a similar decision nationally would be “a huge loss” in advancing diversity.

“It’s a complete falsehood that it’s depriving qualified people of an education,” she added.

Affirmative action also drew support from Dr. Gene Block, chancellor at UCLA, who noted that California also has banned affirmative action in admissions. He cited this as one reason why the incoming freshman class of 4,800 at UCLA includes only 200 African-Americans.

“It’s a small group and we’re not proud of that,” he said. “There’s no substitute for having diversity in the classroom.”

The high court is expected to hear arguments in October on Fisher v. University of Texas, in which a White plaintiff is alleging illegal discrimination in admissions. The Obama administration weighed in on the issue recently by urging the court to allow universities to consider race as an admissions factor.

The Supreme Court most recently ruled on affirmative action in 2003, when a narrow five-vote majority ruled that universities had a legitimate interest in offering diverse classes. Under this ruling in the Grutter v. Bollinger case, colleges could use race as one factor in a comprehensive review of a candidate’s application.

Many analysts say the current court may offer a different result from 2003, however. Judge Sandra Day O’Connor, who wrote the majority opinion in 2003, has retired and her replacement, Judge Samuel Alito, has not supported government policies with race as a factor.

The forum also focused on financial aid access and perceptions of the value of higher education in today’s society. Attendees called for more education and outreach to low- and middle-income families to emphasize the importance of college and the various options to pay for it.

Loans “tend to scare away families,” Coleman said. At Michigan, she has tried to replace loans with grants for all students from families earning less than $40,000 a year. But there is still a need to better educate families about college costs and debt, she said.

While some students — particularly in post-baccalaureate programs — may incur large debts, she said a four-year undergraduate education still has great value. Also, graduates with a bachelor’s degree typically earn $1 million more during their lifetimes compared with those who lack the degree, Block said.

Though some question the value of a college education in today’s economy, speakers at the forum sponsored by UCLA and Zocolo Public Square strongly endorsed the value of a four-year college degree.

Dr. Vartan Gregorian, president of the Carnegie Corporation of New York, also vehemently defended the value of a liberal arts education in college.

“We go to college to learn how to learn,” he said. “I’m all for jobs, but jobs change. We’re confusing jobs with careers.”