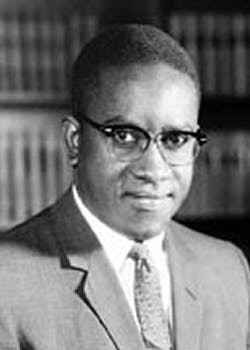 First meeting Dr. Andrew F. Brimmer in 1985, I was as excited as a distant fan who finally meets a rock star, but I came to know him, not only as the intellectual giant he surely was, but as a supportive mentor, a caring friend and family man as well as a civic leader who was also deeply concerned about the socio-economic development of the Black community.

I likely learned about Dr. Brimmer’s historic appointment as the first African-American to serve on the Board of Governors of the Federal Reserve System from my Oberlin College professor, Thomas Dernburg, who had served as staff on former President Johnson’s Council of Economic Advisors. At the University of Michigan, Professor Paul W. McCracken, who had served as a chair of President Nixon’s Council of Economic Advisors, praised Dr. Brimmer’s work during a Ph.D. forum. Naturally, I was quite impressed when, while assisting my mentor Dr. Alfred L. Edwards, I observed that he received a call for a freelance consulting job from the renowned Dr. Brimmer.

A few years later, while on leave from Duke University to work as a visiting professor at the Federal Reserve Board, I heard from senior staff economists about Dr. Brimmer’s reputation as one of the Fed’s most prolific and scholarly governors. More recently, as a director of the Charlotte branch of the Federal Reserve Bank of Richmond, I reflected with pride that then-Governor Brimmer was a leader in creating the important roles for federal bank and branch directors to provide early regional economic reports to policy makers.

Even after leaving the Fed in 1974 to join the Harvard Business School faculty and start Brimmer & Company, he continued his tremendous productivity in both practitioner and academic venues. For more than 60 years, Dr. Brimmer engaged in multiple sessions at the annual Allied Social Sciences Associations meetings. For the last several years, there was a special “Brimmer session,” which included internationally renowned academics, top level government officials and private sector luminaries.

I finally met the esteemed Dr. Brimmer when Dr. Phylicia Fauntleroy, then a staff economist with Brimmer & Company, asked me to help with a project. Throughout the rest of my years in the District of Columbia and sporadically thereafter, for nearly a decade, I had the incredible learning opportunity of working with Dr. Brimmer. He had a keen ability to translate complex analytical insights into clear, practical, actionable recommendations. Thus, he was called upon for myriad analyses from the railroad industry to financial services to the macro-economic cost of discrimination and more.

My experience was that Dr. Brimmer was readily accessible to younger or less well-known economists. Indeed, Dr. Brimmer often shared aspects about his career development with me and with other protégés. He talked about his own mentors who, viewing his potential, advised him to change his plans and instead pursue his doctorate at Harvard and access that network. Dr. Brimmer talked about his unexpected call from President Johnson, their discussion in the Oval Office and his subsequent nomination to the Federal Reserve Board. He shared some of the challenges and privileges of corporate board memberships, including a poignant memory of his visit back to Newellton, La. when USA Today founder Al Newhart decided that Gannett Company board members should be pictured in their birthplaces for publication in the annual report. Dr. Brimmer even shared advice for building a consulting business, with some tips generously credited to others as due.

While Dr. Brimmer did not hesitate to voice his carefully reasoned and elegantly articulated viewpoints, he was never dismissive, and he wore his acclaim lightly. Indeed, although I often worked for his firm, Dr. Brimmer and I both testified before the U.S. House of Representatives Subcommittee on the District of Columbia on one occasion: he represented Brimmer & Company and I represented my own firm. Dr. Brimmer mentored a number of now prominent economists, including Dr. Bernard E. Anderson of the University of Pennsylvania’s Wharton School of Finance and former assistant secretary in the U.S. Labor Department.

Dr. Brimmer regularly and conscientiously applied his considerable economic expertise to promoting economic equity. While holding board memberships with prominent corporations, such as DuPont and Bank of America, he collegially served on the Black Enterprise Board of Economists alongside a few of us who were unquestionably junior to him. For a time, Dr. Brimmer served on the Harvard Board of Overseers. Also, he served more than four decades on the Board of Trustees at Tuskegee University, where the Brimmer College of Business and Information Science bears his name.

In addition to his leadership positions in more established economic societies, Dr. Brimmer was an active participant in the National Economics Association (originally, the Caucus of Black Economists), organizing sessions such as “Affirmative Action in American Business.” Upon his receipt of the distinguished Westerfield award, former Fed Governor Brimmer sharply criticized actions by financial regulators that brought down Freedom National Bank as unusually and unnecessarily severe, with adverse impact upon the financial capital base of the Black community. Moreover, Dr. Brimmer offered compelling economic argument against aspects of the judicial system in its negative and often unwarranted impact against Black males, Black families and Black communities.

I was privileged to work with Dr. Brimmer on a number of disparity studies. These studies analyzed historical and continuing contracting inequities against minority-owned and women-owned businesses. The mammoth Atlanta–Fulton County study, which Dr. Brimmer co-managed with former U.S. Secretary of Labor Ray Marshall, included a host of economists, lawyers, historians and other professionals. Dr. Brimmer had valuable insights about the role of government (federal, state and local) in either promoting or thwarting entrepreneurial development, and thereby, wealth creation.  An economic advisor to numerous entities, Dr. Brimmer was a prodigious researcher to the end.

The nation, and indeed the world, has lost a great economist and citizen leader — an indefatigable intellectual, yet results-oriented practitioner; a searing analytical mind, yet a deeply rooted and caring and generous soul. I very deeply feel the lost professionally and personally of a great mentor and friend.

Dr. Lucy Reuben is a business professor at Duke University.