Flirting with Facism, Dancing with Apartheid

As a lifelong writer, my journalist ethic has prevented me from ever endorsing anyone, yet, that has never stopped me from commenting on elections, especially ones in which a sizable portion of the electorate appears to be flirting with the twin evils of fascism and apartheid. 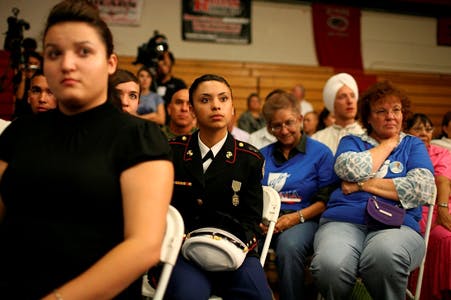 Having lived through the Nixon, Reagan and Bush eras, one could legitimately ask: is the current misogynistic and racial supremacist GOP nominee actually more dangerous than those previous warmongering presidents who caused the deaths of millions around the world? Arguably, the difference between him and his predecessors is that they limited their wars to proxy wars and against nations without nuclear weaponry. The reason people seem to fear this nominee is because he seems to be inconsistent, unstable and erratic, qualities no one wants in a leader at the controls of this nation’s nuclear arsenals.

Outside of that, he probably would be little different then his Republican and Democratic predecessors including the current president in regards to war. On top of Iraq and Afghanistan, the United States is currently involved in warfare against a half a dozen countries in the Middle East and Africa, primarily via drone warfare. It is highly likely that both candidates would continue those policies. The threat from the GOP nominee is probably greater only because, in the realm of nuclear warfare, he doesn’t quite seem to understand the concept of Mutually Assured Destruction (MAD).

Outside of that, the difference between the two would probably be at the domestic level. As a resident of Arizona, in him, I foresee: The United States of Arizona. That should actually scare people. Imagine a nation that resembles what Sheriff Joe Arpaio and what former Gov. Jan Brewer have created; an outlaw and reactionary state with legalized racial profiling and legalized thought control; a prototype police state. It also means no health care for children and seniors, ignoring of domestic violence and sexual abuse, and where higher education has zero priority.

The University of Arizona, where I teach, is probably little different than most universities; there’s little support for the GOP nominee here. In fact, it is also hard to find “enthusiastic” support for the Democratic nominee. The other day it took Bernie Sanders to bring out thousands in support of Hillary Rodham Clinton (HRC).

In HRC, people don’t see change. For example, the brutalization and killing of people of color nationwide has always existed, though it appears to have become a plague under the current administration. The unprecedented deportation machine (2.5 million migrants) that currently exists was also created under this same administration. And the much-publicized wall (fencing) already exists. And the nation’s prison system, the largest in the world, which is primarily black, red and brown, is full. And what of the issues of corporate desecration of the earth and water in Standing Rock and Indian Country nationwide? All this under President Obama. So an HRC win does not presage relief for people of color. That is, if there is to be change, it will not come from her own volition as she essentially represents the status quo.

There indeed is a huge enthusiasm gap. Supporters for the GOP nominee are seemingly on extreme steroids. The bigotry that has been spewed out by their candidate has galvanized those who have always had those prejudices. So much so that, as he threatens to not concede, his supporters, with a disdain for democracy and people of color, are openly talking revolution.

And what of enthusiasm for HRC? Perhaps it is now building precisely because the GOP nominee has insulted women in an unprecedented manner. Now we are beginning to hear talk about the historic nature of HRC becoming the first woman president in history. That seemed to have been of little concern to most everybody, including on college campuses, because of her conservative views. In fact, many voters see her not simply as conservative, but also as a warmonger. But since the latest attacks against women, that support for HRC, especially from white women, appears now to be building toward a crescendo.

But where does that leave people of color and other marginalized communities? People appear to be resigned to her winning, however not enthusiastically, believing that little will change. After all, that vision that he threatens to create at home is already a nightmare for people of color today.

That being the case, are third party candidates viable alternatives? Wish it were different, but, come January, one of the two major candidates will be handed the keys to the White House. Unless something radical happens, that means that the democratic process—which includes petitioning government, including civil disobedience—has to continue after the election as opposed to simply waiting for the next election to roll around.

One small consolation: no nuclear annihilation just yet.

Roberto Rodriguez, an associate professor in Mexican American Studies at the University of Arizona, is the recent author of Our Sacred Maíz is our Mother. He can be reached at XColumn@gmail.com.