A Trailblazing American History Professor is Found and then Lost

That would be my caption under a portrait of Dr. Dawn Bohulano Mabalon, a tenured professor and scholar in U.S. History at San Francisco State University, specializing in Filipinos in the American Labor movement. Mabalon died when she suffered an asthma attack after snorkeling in Hawaii. And like that, the academy lost one of the brightest lights of a new generation. Skilled, intelligent, passionate, and most of all, diverse.

Mabalon wasn’t about ethnic studies. She was an expert on American history, but her focus was on something few historians ever bothered to look at: Filipinos in America. Mabalon was a bright, energetic ball of fire who took American Filipinos and U.S. history and fused it with an activist’s passion that empowered the ignored and enlightened the ignorant. If you didn’t know the story, you finally got it. If you were heretofore invisible, you were finally seen.

She didn’t bother with the veritable first draft of history, aka “the news.” 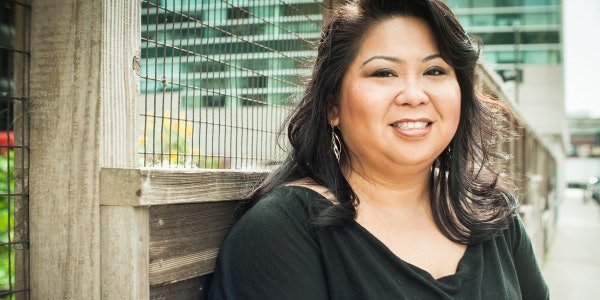 Mabalon, who originally set out to be a journalist, looked to make a lasting impact.  She got her Ph.D at Stanford and scaled the high bar of the academy. She produced legit scholarship about Filipnos in the United States, as if they really mattered. Her 2013 book, Little Manila is in the Heart: The Making of the Filipino/a American Community in Stockton, California, presented the forgotten Filipinos of America in an historical context that could not be shoved under any old rock.

It was there for all to see: A brilliant, personal, yet accessible scholarly work.

As I pondered what Dawn meant to Filipino Americans and the telling of the broader Asian American story, someone found a Facebook post of me and Dawn from her 2013 book launch. It was ten years after I first met her, when I worked the diversity beat in Stockton as a journalist. Along with Dillon Delvo, her Little Manila Foundation co-founder, Dawn was a key source as I wrote stories about their successful effort to preserve the blighted blocks of Stockton’s “Little Manila” into a historical district.

Reading it now five years later just made me cry.

If all the dog-eared pages of my copy are any proof, I’ve used that book she handed me like a bible. I compared my father’s story of coming to the U.S. as a colonized American Filipino with the facts from Dawn’s scholarly work. While writing my one man show, “The Amok Monologues,” I often consulted Dawn’s book to make sure I wasn’t just true to heart, but true to history as well.

In one of my last notes to her this past May, I asked Dawn about the lynchings east of San Francisco in San Joaquin County. People get touchy about lynchings. When I mentioned them in a story I wrote years ago, some took umbrage as if no lynchings had ever taken place.

But Dawn’s painstaking research was in “Little Manila,” and she discovered a story published in the Three Stars, an ethnic media publication in the Stockton area. “A contractor driving near Lodi, just north of Stockton, saw two Filipinos hanging from a tree, and one burned body propped up against the tree trunk,” she wrote, citing the Filipino labor newspaper from an August 1930 edition.

Dawn did the scholarly research in libraries across the country, scoured ethnic and labor newspapers, conducted oral histories with survivors, and got it all down.

Her book made Stockton the historical example of a community’s Asian American assimilation, and how despite the racism, the genes could not be denied.

There was a “Filipino there” there — thriving in Stockton. And indeed, it was a study worth noting, no less than Jamestown.

That’s how important Dawn Mabalon is to Filipinos in America and to whomever is interested in the historical truth about us. She did the legwork, wrote the book. This is how it went down. It can’t be ignored.

In the aftermath of her death I’ve heard from people all over the country.

Liz Pisares, a former colleague of Mabalon’s wrote me that the Organization of American Historiean was about to print the ballots for its next election, and that Mabalon’s name was on it.

“To think that a Pinay (Filipino woman) from Stockton was being groomed to become a future president of OAH,” Pisares wrote wistfully as if speaking to Mabalon herself. “You were not through doing great things.”

And that’s the truth about Mabalon. She was heading into her prime.

On Aug. 17, after the vacation, she was scheduled to speak at the U.S. Civil Rights Commission on Filipino Americans and civil rights struggles.

She had just completed two books, a definitive biography of the Filipino American labor leader Larry Itliong — the man who actually started the Delano Grape strike in 1965 but was overshadowed by Cesar Chavez. And she co-wrote a children’s book to inform a younger generation about their American history.

Mabalon had so much left to give us.

I saw her in Chicago last July at the Filipino American National Historical Society and we talked like old friends always too busy to sit still. We had our ritual conversation that old friends have.

She respected me as an elder and friend. And I gave her props for what she was still becoming. She was a person who did the hard work, uncovered the history, and got it done so that the entire Filipino community could command the respect it deserved. We were seen because of Mabalon. We promised to catch up in California if we didn’t see each other during the conference. And then we gave each other a big hug. For the last time.

The history of Filipinos in America was always there. But no one looked at it with the academic depth that Mabalon did. And now that she’s done it, it’s a shame that we find ourselves having to bury her. But what she wrote will live on as historic milestones, when the academy noticed Filipinos for real. All it took was Dawn Mabalon, who looked in the mirror and saw what American history looked like. Dr. Dawn was a ball of fire. And now in the sad darkness, we realize just how much we’ve lost.

Emil Guillermo is an award-winning journalist and commentator. He writes for the Asian American Legal Defense and Education Fund.  You can follow him on Twitter @emilamok