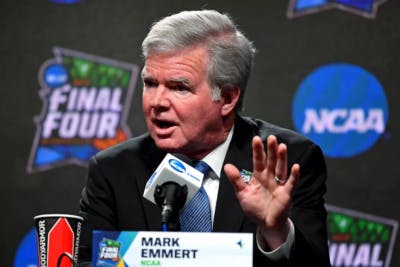 Emmert is scheduled for a videoconference call with Michigan’s Isaiah Livers, Iowa’s Jordan Bohannon and Rutgers’ Geo Baker  on Thursday.

The three protestors used a social media campaign at the start of March Madness, with the Twitter hashtag #NotNCAAProperty. Livers – not been able to play in the tournament because of an injury – has worn a T-shirt during Michigan games with #NotNCAAProperty.

“The NCAA is in the process of trying to change its rules to permit athletes to be compensated by third parties for things such as sponsorship deals and personal appearances, but attempts to reform have bogged down,” ESPN reported.