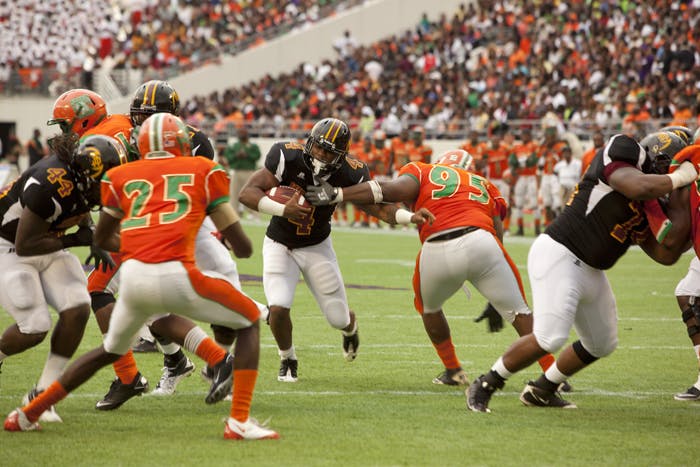 Black college football teams do not play in bowl games. The only venues that come close to duplicating a bowl atmosphere are the annual classic games that are played during the regular season at a variety of locales across the U.S.

Black college football got major media attention for the first time in 1968 when Grambling State University, coached by the legendary Eddie Robinson, played Morgan State in the Invitational Football Classic at Yankee Stadium in New York City. The game drew more than 64,000 people. This was proof that Black college football, under the right circumstances, could be financially viable. The proceeds from that game — $200,000 — helped to bankroll a local academy and a scholarship fund to help inner-city youth pay for college.

Over the years, other “classic” games have come on the scene and the results have been mixed. Some remain viable while others have fallen by the wayside.

The classics with the most longevity and magnetism that keep huge crowds coming back year after year tend to be those games involving schools with storied rivalries. The games are played at neutral sites at big stadiums in big cities.

“Eddie Robinson was my mentor and he always reminded me about why a classic game has value,” said Joe Taylor, FAMU’s head football coach. “He explained that he could play a game at home and not have a sellout. But when he took that same game to Dallas to play a classic, the stadium would be packed. Because of the larger crowds, the schools get more exposure than they would normally, and it helps with recruiting. It’s a win-win for both schools. In most cases, the classics have a huge impact on their local communities. They allot a portion of the profits to pay for college scholarships and that’s always a positive.”

There’s more to these classics than just the action on the field. They are weekend-long events, much like a school’s homecoming, only on a grander scale. Fashion shows, tailgating, job fairs, step shows, parades and a vast array of other events add flavor to the classics experience.

“There’s so much pride for the alumni of both schools,” said Rick Comegy, Jackson State’s head coach. “For the host cities, there’s a lot of excitement, especially if they don’t have any access to Black college games. People don’t come to the classics just for the game, they come for the weekend. But the key for promoters is to bring in exciting teams who have a following. If they don’t do that, then it’s just another regular season game.”

The beat marches on

Even though football is the centerpiece, there cannot be a classic game without the marching bands. Black college bands are known for putting on high-energy halftime shows, affectionately known as the “fifth quarter.” Precision drills, elaborate dance routines, high-stepping drum majors and drum line face-offs between the schools keep people in their seats at halftime. It’s not unusual for thousands to hang around the stadium after the game to enjoy the show the bands put on.

“Having the bands from both schools takes things to an entirely different level,” said Bill Hamilton, a veteran sports information director at South Carolina State. “Marching bands are part of the Black culture,” he explained. “It generates excitement for the young and the elderly alike.”

“We’re part of the entertainment package,” said Dr. Reginald McDonald, band director at Tennessee State. “The bands can be just as big a draw as the game itself. When bands compete against one another, it’s not a win or lose situation. All the bands play the popular songs, so it’s an opportunity for each band to put their own rendition out there. The audience response always lets you know who they like the best.”

The bands also benefit from playing in front of larger crowds. The increased exposure is a boost for recruiting future band members, and depending on the classic, there are monetary rewards. That’s significant because in most cases, according to McDonald, the bands do not get any portion of the proceeds from classic games.

“The Southern Heritage Classic and the Atlanta Football Classic do an excellent job of providing financial support that goes directly to the bands,” said McDonald. “The amounts we receive are enough to fund one-year scholarships for as many as four band members.”

Each classic game has its own loyal fan base, and there will always be a raging debate as to which is better than the other. For Eric Moore, managing editor of HBCU Sports.com, the Florida Classic and the Magic City Classic are at the head of the class.

“The Florida Classic [is] No. 1,” said Moore, who has covered Black college sports through his website since 1997. “It’s a big-ticket event. Orlando is a major gathering place for Florida A&M and Bethune-Cookman alumni. There’s always a host of vendors that surround the stadium. The game usually has added meaning because both teams are always among the top title contenders in the Mid-Eastern Athletic Conference. Plus, there’s always the potential for a huge halftime show.

“Magic City is a close second. Birmingham does an excellent job as the host city. The multiple events connected to the game keep people coming back every year. The big plus is that every year, the fans come out in large numbers regardless of the game’s importance.”

However, Florida A&M’s highly-acclaimed “Marching 100” band has been placed on indefinite suspension and will not perform during the 2012-13 academic year. The suspension came in the aftermath of the death of drum major f, who died during a hazing session after the Florida Classic last November. Eleven band members were charged with felony hazing.

FAMU’s band is a prime moneymaker for the school because of its precision and well-choreographed halftime shows. As a result, the suspension is expected to have a considerably negative impact on the university’s budget and game attendance.

More than just a game

Classics do provide a windfall profit for many HBCUs. But that doesn’t mean that school administrators should “load up” their football schedules with classic games. Doing so might not be in the school’s best interests, said Dr. Percy Caldwell, athletic director at Grambling State University. Grambling plays in four classics every year.

“We play in our share of classics,” he said, “but we want make sure that we always have at least four on-campus games. Students deserve the opportunity to see their team compete. When you choose to play home games somewhere else, you take away that opportunity. Under those circumstances, the majority of students don’t get that chance to see any games. If you keep moving home games away from campus, they may not want to support the team.”

There was a time when classic games were the only means for Black colleges to get national notoriety and a sizeable paycheck. That’s no longer the case with the availability of the “guarantee games.” These are games in which HBCUs opt to play on the road against the big-time programs in exchange for an agreed-upon six-figure payday. These match-ups, which in most cases turn out to be blow-out losses for Black schools, are financially lucrative. HBCUs can make $400,000-plus, which in many instances, exceeds what they would make by playing in a classic game.

“I think that HBCUs will lean more towards playing guarantee games,” said Oliver “Buddy” Pough, South Carolina State’s head coach. “The schools offering the guarantees have the television contract money and the large fan base to assure large payouts consistently. As for the classics, I don’t know if the level of revenue will be like it once was. But for classic games that are well-organized and have the proper support in place, they will continue to survive and do well.”

The way that Black colleges do business with the classics is likely to change to some extent in the future. A prime example is the Shreveport Classic in Louisiana, which is entering its third year. The late-October game features Southern and Prairie View A&M Universities.

Under this arrangement, the two schools have partnered with the City of Shreveport to put on the event. Since there’s no third-party promoter involved, the participating schools get more of the proceeds. It doesn’t hurt that Southern has a branch campus in Shreveport.

“We’ve come together to make this game and make it grow,” said Fred Washington, Prairie View A&M’s athletic director. “I don’t see the classic games going away. But there will be changes in approach. It’s going to take more than someone signing a check to make a classic game attractive. We’re looking to form partnerships that will help us establish our brands while at the same time, helping us to enhance our recruiting.”