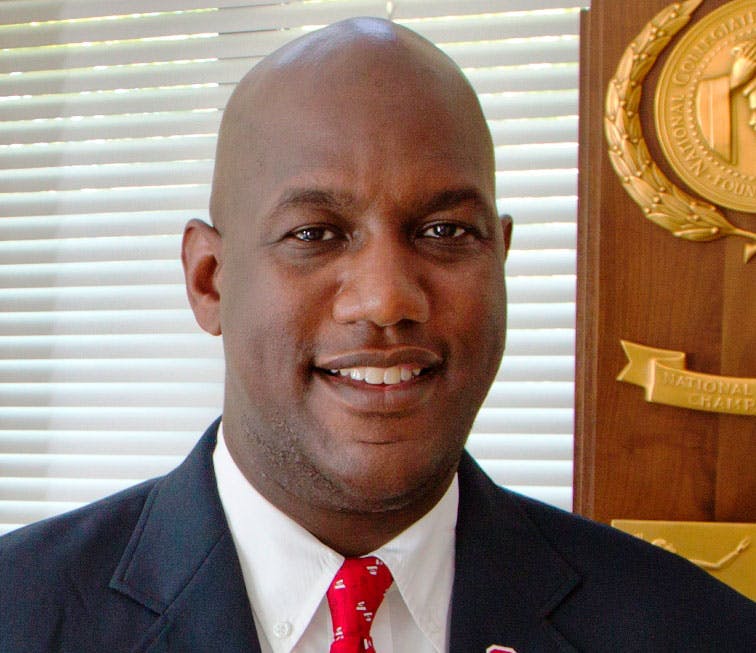 With more than 20 years in sports administration, Bernard Muir joined Stanford University in August as its new director of athletics. His predecessor, Bob Bowlsby, is now Big 12 Conference commissioner.

Most recently, Muir spent three years as University of Delaware athletics director overseeing 21 varsity sports. Previously, he was athletics director at Georgetown University and worked his way up the ladder at the University of Notre Dame, finishing as deputy athletics director. Muir also has worked in athletic departments at Butler and Auburn universities and held positions in the National Collegiate Athletics Association. This past February, he was named to the NCAA Division I men’s basketball committee, which chooses teams for the NCAA Tournament.

He earned a bachelor’s degree in organizational behavior and management from Brown University, where he was a four-year basketball letterman and team co-captain his senior year, and a master’s in sports administration from Ohio University.

All of Stanford’s 35 varsity sports exceed the NCAA’s Academic Progress Rate. For 36 consecutive years, Stanford teams have won at least one national championship, the longest such streak in the country. Its grand total of 103 NCAA championships ranks second nationally, and its 423 individual national titles is tops.

DI:  Unlike many college athletes around the country, you went to Brown already knowing you wanted to pursue a career in sports administration. What sparked your interest?

BM:  Growing up in Gainesville, Florida, our local sports teams were those at the University of Florida, which has a big program. I noticed the preparation and behind-the-scenes work surrounding games, practices and wondered, who’s in charge of all this?

Most years, I got media guides for the teams and read biographies of coaches and other personnel. And I saw how people got these positions.

When I attended Brown, and we would play larger schools, I would get the football and basketball media guides, again, looking at biographies to learn qualifications and job experiences of the coaches and personnel. I wanted to work at a place that struck a balance between academics and athletics.

My parents always said if there was an opportunity to get an education, especially somewhere in the Ivy League, then take it.

One of my college coaches cautioned me not to let basketball use me, but to use basketball as a way to get where I wanted to go. I also knew I wasn’t headed for a pro career. I was a decent rebounder and defender but didn’t score a lot.

DI:  When you arrived at Brown, you told then-athletic director John Perry about your career aspirations. How did you get your first big break?

BM:  He hired me as a student intern one summer. I did grunt work, so to speak, but it let me see what staff responsibilities were for facilities, game management, getting students prepared for the academic year. And I was a student representative at staff meetings to hire coaches and a sports information director. I even got to sit in on construction meetings for the new basketball gym I ended up playing in during my senior year. Obviously, I learned a lot that summer.

John Perry left to become athletics director at Butler, but his daughter was my classmate, so he returned for our commencement. When he asked what my plans were, I didn’t have anything in hand, so he hired me for my first position, which was at Butler.

BM:  When you’re 17 or 18, there’s so much coming at you, regardless of your background, that you don’t think of the next step until much later. Someone like me can make my presence known, let coaches and students know that I’m an outlet when they need help.

DI:  Aside from playing basketball in high school and at Brown, what role did sports have in your childhood and teenage years?

BM:  Even though I grew up in Florida, I was a big Pittsburgh Steelers fan and wanted to play football. But as a high school freshman, I was only five-foot-seven and 100 pounds, so football wasn’t realistic. Then I grew six inches and focused on basketball.

DI:  Would you describe your early weeks in this new job?

BM:  When I was hired, there was a head coaching vacancy in women’s swimming and for the director of track and field, so I have filled those.

I’m also attending different forums and internal meetings, whether it’s members of our coaching staff, admissions, student life or the provost’s office to learn how we’ve gotten to this point in athletics and where we might be headed. For me, it’s fact-finding. I’m also meeting alumni, student-athletes and donors, whether it’s at the pre-game tailgate or over the phone.

Everyone expects and is committed to a high level of excellence in the classroom and on the field. That’s the mantra here. It isn’t an either-or proposition. Students here have tremendous experiences academically and athletically, and it’s important we continue to provide that across the board. One of my priorities is to understand what we can do to put our kids in that position year after year.

DI:  Since this is your third A.D. job, what do you enjoy most about the position? And the least?

BM:  I love watching competition unfold and figuring out how we’re going to support these young people and the coaches. The job is like being an air traffic controller directing all this activity, but I enjoy the interaction with the diverse constituencies.

Being an athletics director has challenges, but there’s nothing about the job I mind so much that I would eliminate an aspect of it. Difficulties are opportunities to be better at your job.

DI:  For 18 years, Stanford has won the Directors’ Cup, which honors the top college sports program in the country. Have your constituencies joked with you about the winning streak?

BM:  The staff and the university president have made a point of telling me how they always win it. Suffice to say, it’s important to aim for 19 straight years and, hopefully under my guidance, the tradition will continue.