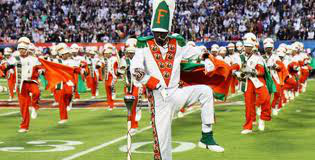 Florida A&M University played its first home game without the famed Marching 100, which was suspended for the year after the hazing death of drum major Robert Champion.
As Florida A&M’s Marching 100 quick-stepped across the grass, the stadium announcer’s voice would boom through the speakers to remind those in the stands that no one could match the show they were watching: “Often imitated, never duplicated.”

This season, the words more commonly used to describe FAMU’s famed marching band, which has performed at high-profile events like the Super Bowl, are “disgraced” and “suspended.” Saturday marked the first football game in decades without a halftime show of elaborate dances, booming percussion and thundering brass.

The band will be absent for the entire academic year as part of the fallout from the hazing death of drum major Robert Champion. Champion died following a hazing ritual that took place following FAMU’s last football game of 2011.

Twelve former band members have been charged with felony hazing in connection with Champion’s beating. All have pleaded not guilty.

The scandal has nearly paralyzed the school. The band has been suspended, and the longtime band director and university president have resigned. The school is being sued by Champion’s parents, who say university officials ignored a culture of hazing.

More immediately, the university is trying to figure out how to entertain a fan base accustomed to dancing in the stands as the band played. They have turned to rappers, high school bands and DJs in an attempt to keep up attendance.

“Around here the band was everything,” said Tracy Garrison, a native of Tallahassee who was tailgating outside of Bragg Memorial Stadium on Saturday.

Al Lawson, an alumnus of FAMU and former state legislator, said the absence of the band had “left a void,” and he was unsure the university could fill it.

“A lot of the fans as long as I remember say, ‘I don’t really come for the game but for the show at halftime,’” Lawson said. “It’s a major, major challenge.”

Lawson noted the university has worked hard in the weeks before the first home game against Hampton by reaching out to alumni and those who own local businesses to encourage them to come to the game. Lawson said he even bought extra season tickets this year.

“The (National Football League) has proven you don’t need a band at halftime to draw fans,” he said.

Andre Brown, who lives in Tallahassee and has supported the team most of his life, acknowledged that it’s “hard when you lose the 12th man.”

But Brown said he hoped that people would show for the game anyway.

“This is a time for FAMU fans to rally for the school and the team,” he said shortly before kickoff.

The first halftime without the band started out with a somber reminder of Champion’s death. Larry Robinson, the interim FAMU president, went to the middle of the field and asked for a moment of silence to honor “fallen Rattlers” as well as all victims of hazing and bullying.

Soon after, the student section was swaying back and forth to the performance of Future, an up-and-coming hip-hop artist whose songs are getting plenty of airplay on urban radio stations.

“It’s not going to be the same, but it’s going to be fun,” said Lileah Roberts, a longtime Rattlers fan who came from Ocala to watch the game because her son Devan Roberts is a starting safety.

There were fears that the lack of the band could affect turnout. But by the end of the first quarter, most of the stadium was full. Robinson estimated that some 20,000 people showed up. Some of the students during the game even started songs that would be played by The Marching 100. The Rattlers beat Hampton University’s Pirates 44-20.

“What a remarkable turnout by the students and the Tallahassee community,” Robinson said right before the second-half kickoff. “I’m really humbled by the show of support.”

The first home game follows a week in which FAMU filed court papers saying that it cannot be blamed for the death of the 26-year-old Champion. The university said Champion knew the dangers of hazing and even witnessed fellow band members getting hazed but agreed to participate anyway.

For Pam Champion, the first home game without The Marching 100 is a bittersweet reminder that her son is dead.

“Unfortunately, my son is not going to be there with the band. Otherwise I would be at the game,” Pam Champion said at a news conference this week in Atlanta.

“In the midst of all the history of that school, with the conduct that has been going on in that band, here’s a moment to reflect that the whole thing is about the safety of the students, and until they address that, there is no reason that the band should be there.”