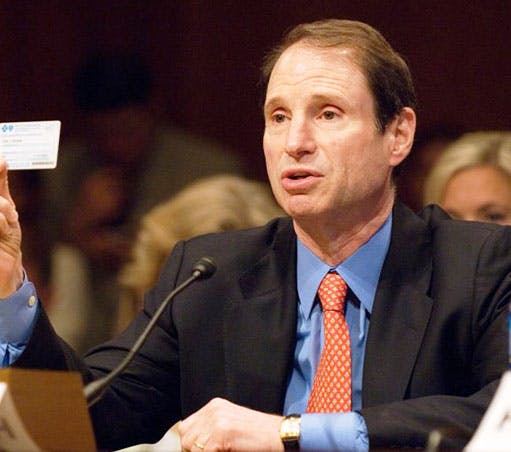 WASHINGTON – If students and parents had better information about how much a college graduate from a given program is likely to earn after graduation, it would enable them to make better decisions about which college to choose.

That was the notion that two U.S. senators and several panelists advanced Wednesday at a forum titled “Holding Higher Education Accountable.”

Much of the conversation dealt with the anticipated benefits of the proposed “Student Right to Know Before You Go Act,” introduced earlier this year by Sen. Ron Wyden, D-Ore. and co-sponsored by Sen. Marco Rubio, R-Fla., both of whom spoke briefly at the event.

“I think federal education policy is at a fork in the road right now,” Wyden said at the event, hosted at the American Enterprise Institute and co-sponsored by the New America Foundation.

“Historically, (federal education policy) has been about access … I want to keep that focus,” Wyden said, expressing his support for Pell Grants, Stafford loans and the like.

” I think we ought to go, however, to access plus value, and make it possible for students and parents to make decisions so they can bring the most value out of the scarce resources they have for education,” Wyden said.

Rubio voiced similar concerns, both from a consumer standpoint — at one point he noted how shoppers can read the content on a box of cookies before they decide to eat them — as well as from the standpoint of being a steward of federal tax dollars.

“This is federal money,” Rubio said. “We want to make sure this federal money is being used in the highest and best way to achieve a return on investment.”

Among other things, the Student Right to Know Before You Go Act would establish databases that include earnings data disaggregated by educational program, institution, degree, employment sector and state to create an “employment and learning exchange.”

The idea is to tie wages of graduates to their program of study to enable prospective students and their families to see how much graduates from a program are making before they start to borrow money to attend a particular school.

Among those who supported the idea were panelists Dr. Anthony Carnevale, director of the Georgetown Center on Education and the Workforce; Pauline Abernathy, vice president at The Institute for College Access and Success; and Dr. Mark S. Schneider, vice president at the American Institutes for Research.

Schneider, who served as U.S. Commissioner of Education Statistics from 2005-2008, said many institutions of higher learning balk at the idea of being asked to disclose information about outcomes for their students.

“The politics of higher education, not surprisingly, can be very intense,” Schneider said. “Institutions have a lot of power and tend to be difficult because a lot of the outcomes of students are not really up to the level that they should be.

“And when you start trying to figure out the key indicators and putting them out in public, a lot of institutions get bent out of shape.”

Schneider is currently working with several states to publicize earnings of college graduates. Earlier this week he released a study titled “The Earning Power of Graduates From Tennessee’s Colleges and Universities,” which found, among other things, that “the school you attend and the major you select can make a big difference in what you earn,” according to a summary of the report by American Institutes for Research.

Schneider said one problem he has encountered is that in using state wage data, he could not account for about half the students, whom he said may have moved out of state, be unemployed, in the military or doing missionary work.

“We don’t know,” Schneider said. “It’s a very serious problem,” he said when asked about how the mobility of students might hinder efforts to tie state wage data to college transcript data.

Abernathy said the earnings information being called for is akin to the window stickers that are required to be placed in new vehicles by a 1958 federal law so that consumers know more about the vehicle, such as how many miles they get per gallon of gas.

Carnevale said the idea is transparency in order to more efficiently allocate resources in a time of scarcity.

The only panelist pumping the brakes on the idea of publicizing wage earnings of graduates was Amy Jones, education policy counsel and senior advisor for the Republican-controlled Education & the Workforce Committee of the U.S. House.

Jones said it is best to allow states to collect and publicize such data if they wish, but that it would be better for the federal government to remain hands off.

She also raised questions about student privacy being compromised or federally-maintained databases being misused.

“It’s not enough to say [security] has improved and we don’t need to worry about student privacy,” Jones said.

She added: “The federal government doesn’t need to know that much about a person, and the concern is that once you go down this path, people will misuse information or want more, and at some point be looking at the entire lifespan, and if [a person] did something as a child, mandate that people raise children a certain way.”

Jones said the discussion about accountability in higher education would continue Thursday on Capitol Hill during an Education and Workforce Committee hearing titled “Assessing College Data: Helping to Provide Valuable Information to Students, Institutions, and Taxpayers.”