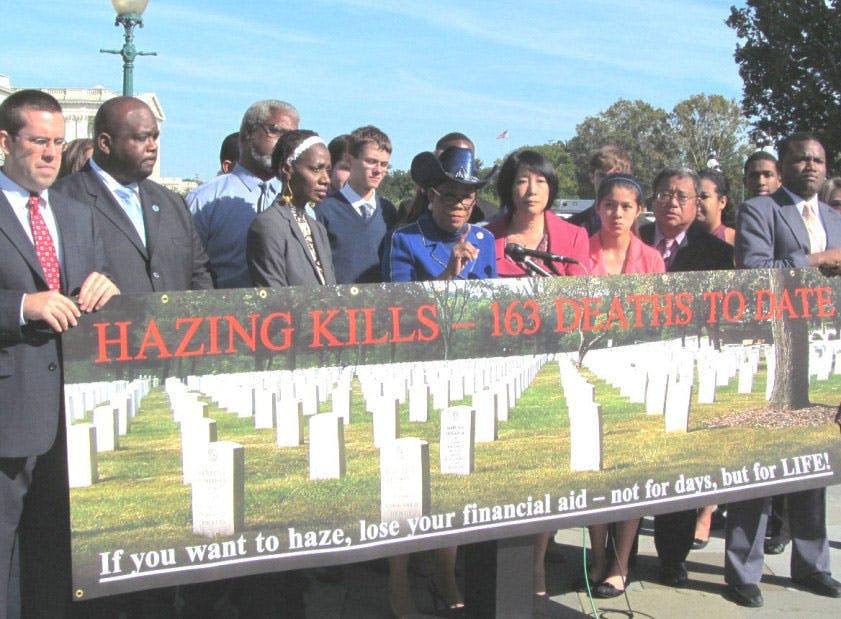 “The time for Congress to act is now,” said Wilson, speaking at a press conference with the U.S. Capitol in the backdrop and flanked by staff and supporters holding a banner emblazoned with these words:  “Hazing Kills — 163 deaths to date. If you want to haze, lose your financial aid, not for a few days, but for life.”

Champion’s mother, Pam Champion, joined by her husband Robert, called on fraternities, sororities and others to fight against the mindset that hazing is an acceptable part of sorority and fraternity culture.

Champion said the term “hazing” belies the reality of the fact that it involves abuse, assault and battery, and in the case of her son, “murder.”

Since these crimes are labeled as hazing, Champion said, perpetrators tend to get off with a light punishment. She slapped her own wrist to illustrate the point and expressed hope that Wilson’s proposed hazing law will have some “meat.”

Wilson said while news coverage on Champion’s death may have created the impression that hazing is a problem exclusively at Black colleges, “nothing could be further from the truth.”

She cited her role as a Florida state lawmaker in the passage of the Chad Meredith Act, which makes hazing a felony under Florida law. Meredith was a University of Miami student whose 2001 death was found to result from hazing.

Leanne Kowiak, mother of Harrison Kowiak, a Lenoir-Rhyne golf scholarship student who died in an alleged hazing incident off campus in 2008, also spoke at the press conference. She said hazing is a topic that “we cannot ignore.”

“You cannot just turn a blind eye,” Kowiak said, recalling her son’s great promise as a student, compassion for others and affinity for his younger sister, who wept at the press conference. “You can’t just sweep it under the rug.”

Under Wilson’s proposed legislation — which has yet to be formally introduced but is officially known as the Halting Hazing Act of 2012 — states that don’t make hazing a felony could lose federal transportation funding.

The act is slated to be discussed more in depth during a forum Friday at the Congressional Black Caucus’ Annual Legislative Conference. In addition to Kowiak and Pam and Robert Champion, the event will feature several fraternity and sorority leaders as well college and university presidents.

An early draft contains a “safety valve” clause that would enable university presidents to declare a student sanctioned for hazing to remain eligible for financial aid. The idea behind the provision, insiders say, is to recognize the wide spectrum of hazing incidents, as well as the fact that some institutions deal with hazing more vigorously than others, and to give presidents latitude in deciding whether a student should lose their financial aid for a hazing incident that may not warrant such a severe penalty.

Wilson said she hoped to garner bipartisan support for the act. The act drew support from some fraternity leaders. They included Jonathan A. Mason, Sr., international first vice president of Phi Beta Sigma.

Mason said he empathized with parents who struggle to raise their children for a life of success.

“You don’t send them to college to have them be brutalized,” Mason said. “We don’t want to have another child’s parent to get a call in the middle of the night saying their child is in the hospital or worse.”

Champion’s mother highlighted a new foundation formed in his son’s memory to combat hazing — the Robert D. Champion Drum Major for Change Foundation, Inc. — and invited individuals to visit the foundation’s website to learn more about how to end hazing.

She said her son is still a drum major, just one who has “graduated to a higher level.”