Calling it a Career 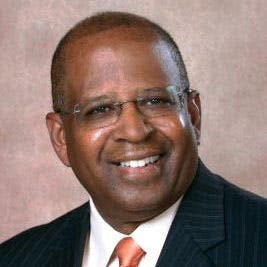 Dr. James Hawkins has retired after 35 years of service as a journalism educator at FAMU.

On the walls of his modest office at the School of Journalism and Mass Communication at Florida A&M University, Dr. James Hawkins, the school’s recently retired dean, kept pictures of two heroes about whom he could talk for hours: Jackie Robinson with the Brooklyn Dodgers and, separately, golfer Tiger Woods.

The picture of Robinson is in memory of the man Hawkins had hoped since childhood to emulate, only to learn one has to be more than good at baseball to make it to the majors. The picture of Woods reflects the pastime Hawkins enjoys most when he’s not engaged in journalism. Soon, he says, recreational golfing will move front and center, at least for a while.

Hawkins, who was an avid reader of the Weekly Reader in his elementary school in Newport News, Va., has made good on the news he made last summer when he announced he would retire August 31, 2012, ending his 35-year career as a journalism educator at FAMU.

“I came down [from Ohio State University, where he earned a master’s and doctorate in communication] thinking I’d be here two years and then back [to Ohio State]” where he expected to get a job offer to return, says Hawkins in a recent interview about his upcoming retirement. “I got the offer but, much to my wife’s chagrin, I turned it down. I told myself ‘the students here needed me more.’ Two years turned into a lifetime” of teaching, says Hawkins, hastening to add there has never been a dull moment.

Hawkins, a graduate of Oakwood College in Alabama where he served as editor of the monthly campus newspaper, The Spreading Oak, has seen FAMU’s journalism program grow into one of the nation’s best. He oversaw the completion of the new $25 million journalism and graphic arts program building. He pulled together the team that this spring helped the journalism division maintain its accreditation with the Accrediting Council on Education in Journalism and Mass Communications.

Known as the students’ champion, Hawkins says he’s enjoyed many great moments with the school. He’s also taken his lumps, most recently budget cuts that nearly gutted his broadcast program. Along the way, Hawkins has maintained a trademark style—steady, unflappable, low-key.

For sure, journalism education has changed dramatically since Hawkins came to FAMU in 1977, three years after the journalism program was launched, he says. Some things about it have not and should not, he adds. Recently, Hawkins sat down with Diverse to discuss his career and the future of his profession.

DI: What’s it like being dean of a school?

JH: It’s like being a mini-president. The dean has to deal with students, faculty, administrators, alumni. The dean catches it from all these stakeholders.

DI: How do today’s journalism students differ from those of 1977, your first year teaching?

JH: Students back then probably came from more sheltered environments, but they probably had better fundamentals, their reading and writing abilities. Their work ethic was stronger. They were willing to work for what they wanted. Today, and it’s not universal, there’s some sense of entitlement and more unrealistic expectations. They are going to have to get a dose of reality.… Technology-wise, students today are sharper. They take to technology like ducks to water.”

DI: Your campus newspaper, The Famuan, is nationally recognized and has won a number of awards for outstanding work. When student journalists get things wrong, how do you deal with such situations?

JH: It’s a (teachable) moment. We don’t restrict. We instruct. They have to learn from their mistakes. If it’s an error of judgment, I’ll tell them.

DI: At FAMU, the school newspaper has been literally trashed on occasion, copies taken from racks in protest of stories. What advice do you offer colleges about the role of a free press on campus?

JH: You have to be independent [and] committed to your cause, your readers, your audience. Fortunately, we haven’t had to deal with an administration hostile to the student media. This past year, for example, we covered the band hazing story quite a bit, and some student leaders bothered by our coverage wanted to cut our funding. We just told them, “You are going to make a bad situation worse” (and they backed down). Even in the face of the potential threat, we stand by them (our students).

It’s a different model, a little uncomfortable in a way. It’s not the teacher on stage any more providing the information. We have to create a culture where students and teachers exchange more. While those requisite skills are still important, there needs to be a new delivery system.