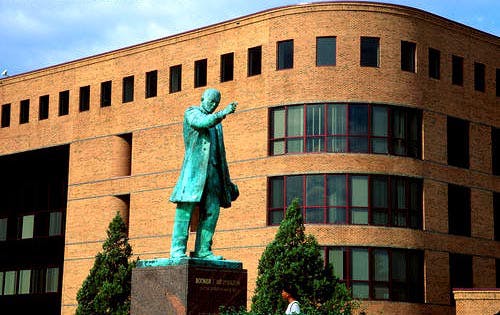 Hampton University reported a loss of some $6 million in anticipated revenue traceable to the revision of PPL criteria.

Thousands of students at historically Black colleges and universities (HBCUs) across the country had their fall enrollment plans derailed this year by significant changes in a key federal loan program, according to officials at a number of institutions and a report last month by the Chairman of the President’s Board of Advisors on HBCUs.

Institutions large and small, public and private, cited a tightening of “criteria” for receiving Parent PLUS loans (PPL) as the culprit, with the advisory board chairman’s report estimating some 14,000 students learned in August and September that the U.S. Department of Education, which administers the PPL program, had rejected applications from the students’ parents or guardians for loans to help pay college expenses.

Under the new loan criteria, parents seeking loans to assist their children with college costs were required to disclose debt “charge offs” and items in collection as part of their financial, including medical bills. Those items, not required in the past, were considered by loan processors when determining whether a parent qualified for a PPL.

PLUS loans have no cap in the amount that can be borrowed. Generally, they carry an interest rate of 8-9 percent.

The impact of the tighter loan rules was widespread, said admissions and financial aid officials at a number of schools sampled,  particularly among the historically poor and the `new poor,’ those families that lost high paying jobs, their homes and much of their savings during the Great Recession that started in 2008.

Hampton University, the prestigious private college in Virginia, reported a loss of $6 million in anticipated revenue, traceable to parents of students enrolled at all levels being denied PPLs.

“Take your pick of HBCUs,” said one financial aid officer not authorized to speak officially for her institution. “It affects our demographic.”

An official at another HBCU said there was a growing consensus among financial aid officials based on anecdotal information that indicated the loan rejection rate ranged from 20-60 percent, depending on the institution. The rate was lower for loan applications tied to graduate school programs.

“While this matter is creating a crisis in the Black college community, it is a matter that is impacting all low- and moderate-income families and putting a college education out of reach for many,” said Dr. William Harvey, president of Hampton and chairman of the president’s advisory board.

Harvey, citing anecdotal evidence gathered from his discussions with fellow presidents and leaders of the three principal advocacy organizations that represent HBCUs in Washington, estimated that HBCUs as a group stood to lose more than $160 million in revenue, if the 14,000 number holds. “Indeed, it is crippling for many of our institutions,” he wrote in his report circulated late last month during the White House Conference on HBCUs.

As the loan rejection trend began to take shape, Harvey and his colleagues brought the PPL issue to the attention of U.S. Secretary of Education Arne Duncan “to let him know the gravity of the situation.” Harvey said Duncan said he understood the issue and “was on it.”

The Department of Education has since begun reviewing hundreds of applications and has already notified many schools of overrides of initial decisions to deny loans.

The surge in denials “did register on our minds,” said Lynn Iocono, director of financial aid at Delaware State. “More families were seeing more declines,” she said. In recent weeks, Iocono said, the university is seeing “more credit overrides,” meaning loan applications that were initially denied are being reconsidered and approved.

Department of Education Press Secretary Justin Hamilton said the agency did indeed “strengthen” the criteria for obtaining Parent PLUS loans in a move to be “in keeping with industry standards. The criteria are used to determine whether a borrower can repay a loan.

Hamilton said the agency would not have a full picture on all of its loan volume until sometime in November. Meanwhile, the agency was giving several options to those whose applications were denied, he said. Applicants can simply submit the same application again, reapply with co-signers or seek to increase their federal Stafford loan, if they have one.

Meanwhile, some of the institutions affected have taken some steps on their own to help impacted students.

Howard University “successfully aided scores of students with appeals” on their Parent PLUS loan application denials, said University Spokeswoman Kerry-Ann Hamilton. The university also kicked into gear a program it launched last spring called “Bridging the Gap Student Aid Campaign.” Its goal is an initial $25 million in unrestricted and endowed need-based funds that can be used to help worthy students “regardless of their ability to pay,” Hamilton said.

Benedict College tapped into its resources to give students impacted by the PPL denials small scholarships and grants to help close with their newfound financial need. Delaware State has taken similar action, said Ms. Iocono, offering some affected students scholarship aid packages that are a combination of grants, scholarships and loans.