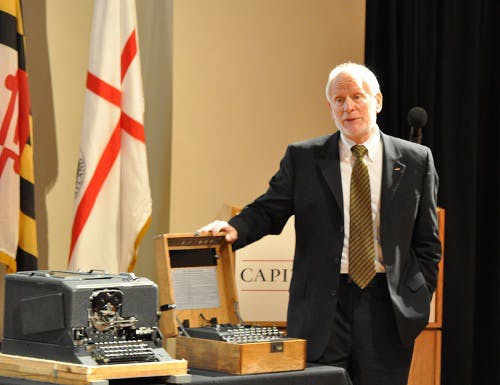 Senior cryptology historian Timothy Mucklow said the secret of the Enigma was kept until 1974 because a few smaller underdeveloped nations continued to use it.

Science and technology students at Capitol College in Laurel, Md., were among the privileged few to gain a rare glimpse of the famous German Enigma cryptology machine and to hear some long-held U.S. secrets about cracking its code during World War II.

Mucklow brought both pieces of equipment with him as he demonstrated how they work and their uses during the war. The mint condition machines were on display on the stage in the Avrum Gudelsky auditorium on campus.

Mucklow told students that the secret of the Enigma was kept until 1974 because a few smaller underdeveloped nations continue to use it. Students gathered around Mucklow and the equipment to get a close look at the Enigma-encrypted communications machine that Germany’s armed forces believed were impenetrable.

“We know about Enigma mainly because it failed,” Mucklow said about the cipher machines used by Germans during World War II. “When the Nazis came to power they recognized Enigma’s value and made a few alterations. Germany, during World War II, was convinced that it was unbreakable. They put too much reliance on one system with a certain degree of arrogance.”

The Enigma machine has three rotors with 26 pins on one side and 26 contacts on the other. It is an electro-mechanical device that relies on a series of rotating wheels or rotors to scramble plaintext messages into incoherent ciphertext. The machine’s variable elements can be set in many billions of combinations, and each one will generate a completely different ciphertext message.

“By 1938, the Enigma was in a robust stage of its development,” Mucklow said. “Unfortunately for them [the Germans], three Polish mathematicians broke Enigma’s code. Before Poland was overrun, they passed the secret to Britain, which pulled together its best mathematicians. Britain’s contribution was that it industrialized the process. There was hardly a single engagement that we didn’t know what Germany would do before they did it.”

“The problem with the Enigma was its fallibility and predictability,” he said. “Another mistake was that they (Germans) were not very disciplined.” Mucklow said their documents were often initialed and included data that made it easy to detect locations of its senders and recipients.

Mucklow raised the all-important question to the audience, “Why didn’t Germany find out?” According to the historian, that’s where the U.S. comes in. Mucklow credits U.S. military operations for never making it obvious that they knew Germany’s location. “Anytime it was used, a plausible explanation existed,” he said. “The technology was never given away.”

The decoded information and cooperation between the U.S. and Britain was unprecedented, Mucklow told students.

“It was the first time in the history of the world that two countries joined together crystalizing understanding about what intelligence brought to the problem of warfare,” he said, acknowledging that the intelligence shortened the war by two years and saved an untold number of lives.

Building a better decoding machine, the U.S. improved the early work of Polish mathematicians and their so-called BOMBA. From 1943 onward, an improved version called the BOMBE was built in the U.S.

“Early on, our cryptology was the best because we realized that we needed a better skill set. The U.S. drew on mathematicians and linguists; that’s what gave us the advantage. We’d like to think today that we are still the best.”

Mucklow is a senior historian on the staff of the Center for Cryptologic History, following a long career in information assurance at the National Security Agency and the U.S. Air Force.

The event was one of several planned as part of National Cybersecurity Awareness Month at this campus. Mucklow was the featured speaker in Capitol College’s Innovation and Leadership Institute President’s Forum, where students hear from a broad array of speakers with first-hand knowledge on topics to broaden their career preparation.

Other events include a Cyber Battle Lab, where participants will both defend and attack secure systems in the competition. Students must simulate, detect, analyze and defeat the type of cyber attacks that are frequently seen in the information assurance field. In addition, an Information Assurance Advisory Board meeting was held to discuss the progression of Capitol’s information assurance curricula, as well as the Project SCOPE (Security Clearance Overview and Preparation Education) workshop.

Capitol College is the only independent college in Maryland dedicated to engineering, computer sciences, information technologies, and business.