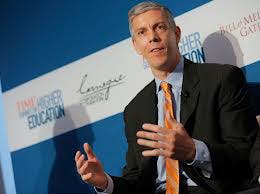 The United States has fallen to No. 14 globally in the annual tally of newly degreed, four-year college graduates.

The bulk of community college students do not actually earn an associate degree.

Polls suggest that 75 percent of Americans believe a college education increasingly dictates who thrives in the modern workplace. The same proportion of people is frightened by unrelenting spikes in college costs.

Those were among a litany of troublespots highlighted at last week’s Summit on Higher Education, where a presumed path forward also was laid out by, among others, U.S. Education Secretary Arne Duncan.

“This cannot be addressed piecemeal or by the federal government alone,” said Duncan, a keynote speaker at the New York City confab, hosted by Time magazine.  “In many ways, the American system of higher education is still the envy of the world … (But) it must get dramatically better.”

Improvements, Duncan added, are essential in three key areas: Containing what he describes as exorbitant college costs without diminishing the quality of education. Increasing the count of college students who also actually earn a degree—and earn it on time—and placing limits on how long a student can get government aid. Education funding—from both the public and private sectors—would be based on student performance and other outcomes.

Any path forward, more and more, will require the help of businesses whose own futures rest on their capacity to hire workers with intellectual, technical, vocational and other skills matching the available jobs, Duncan told attendees at the conference, co-sponsored by the Carnegie Corporation and the Bill & Melinda Gates Foundation.

Colleges not only must do more collaborating and forecasting with the business world, they also must be more committed to local schools and, as some are, start their own kindergarten-through-high-school programs, panelists said.

That, Duncan added, is key to the “transformational” education changes demanded in these times.

As much as anyone embraces the idea of large-scale change, the panelists agreed, any overhaul will not be easy.

“There must be a way of focusing on outputs that (don’t) reduce us to the lowest common denominators,” said Aoun, offering a caveat to Duncan’s push for tying funding to empirical performance gains.

“Teacher training is a problem,” philanthropist Broad said. “If it were up to me, I would close all education schools in America and have students start as a math major, a science major … and then, two to three years later, get into pedagogy.”

Interjected Gerstner: We’re largely “pumping out terrible teachers who are unprepared, uneducated. … We have some great teachers, but, on average, we have too many poor teachers” who are the pipeline toward higher education for elementary and secondary school students.

For its part, Arizona State University dismantled its college of education a few years ago, audience member ASU President Michael Crow told the roomful of conferees. It was “rebuilt as a teachers college,” Crow said, with 45 fewer faculty members.

Overall, Arizona State has boosted its enrollment by 25,000 over the last eight years, he added, including by ramping up its roster of online courses. Yet, educators at other universities have criticized those changes, as if, Crow added, “you cannot be big and good, and depart from traditional methodology. … There are institutions attempting to go down the [innovation] path but we go alone.”

Can, asked journalist Bill Moyers, the panel’s moderator, a holistic, national overhaul of kindergarten-through-college education gain support at a time when lawmakers are increasingly poised to slash education funding?

“Education should be the one thing that should have bipartisan support,” Duncan responded. “If folks want to get past [social] dysfunction, there’s no better place to start than education. … Having said that, education is very, very slow to move.”

The American people are partly responsible for that lethargy. Too many parents, for example, are insufficiently engaged in their children’s education—which is one reason an increasing share of students need remediation once they land in college—and are not monitoring the policy-making that dictates what is taught, how it’s funded and so forth, Duncan continued. When he once asked attendees at a National Association of Governors gathering how they reconciled cutting education budgets while hiking funding for prisons, the room grew silent. “Budgets reflect our values,” Duncan said.

“What’s happening in our society,” Moyers asked, “that is reversing the idea of education and higher education as a force in our lives?”

“If,” Broad said, “our athletes were as poorly ranked as students in our schools, the American people would be outraged.”

And Ferguson: “We’re at risk of this being the first generation where kids have less education than their parents. I don’t think we’ve drawn a clear enough line from education to success in a global economy. … We’ve not communicated that jobs of the future depend on [a college degree] more than the jobs of the past.”

“The challenges to our higher education system can only be met through shared partnership,” Duncan said. “It’s time to end the buck passing and the blame game. … For all the challenges we face, I’m also very, very optimistic that these challenges can be won.”