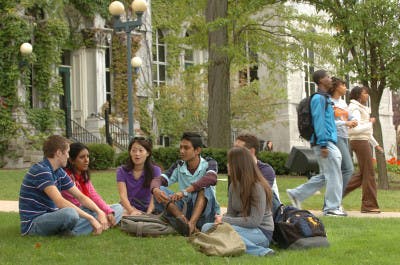 The first in her family to go to college, Alicia Aiello wanted more than anything to study at Syracuse University. But tuition at the private university was expensive, her parents couldn’t help much, and she didn’t get enough financial aid to bridge the gap.

So within her first semester, Aiello found herself taking out an $18,000 bank loan she couldn’t afford, with terms she didn’t entirely understand, on which she’d owe $6,000 worth of interest before she paid back even a penny of it.

Many students are making mistakes like this, revealing the little-reported reality that America’s student-debt crisis is being fueled in large part by borrowers’ ignorance about financial matters in a system that makes getting a loan so easy that many don’t have a clue what obligations they’ve assumed.

“A lot of us don’t have parents who went to college or who understand anything about this process,” Aiello says. “I have a lot of friends who just signed those loans without any idea what was going on. There are a lot of oblivious students.”

Students appear to know so little about the repercussions of the loans they take out, in fact, that some universities are starting to require them to undergo financial-literacy training. The first statewide plan to curb student-loan defaults, announced with great fanfare by the State University of New York system, consists not of making more direct grants available or providing tuition discounts, but almost entirely of helping students better understand the debt they’re getting into.

It’s not altogether altruistic. Universities and colleges are being judged on their average loan debt and default rates, and stress about finances can derail students and cause them to drop out at a time when funding of public higher education is increasingly tied to its success at producing graduates.

American university and college students graduated with an average of $26,600 of debt last year, according to new figures from the Project on Student Debt. More than 9 percent default within two years, and 13.4 percent within three, the U.S. Department of Education reported last month.

Principal among the missteps feeding this rising sea of red ink is students’ decisions to borrow from banks and other private sources, which typically charge more than federally guaranteed loans administered by institutional financial-aid offices.

Federal loans have fixed interest rates and flexible repayment terms. Private student loans have variable interest that is usually higher, and often require parents or others to co-sign and become responsible if the loan is not repaid.

“You’re really at the mercy of your lender if you hit hard times,” says Lauren Asher, president of The Institute for College Access & Success. “And lately we’ve had some bad times.”

More than one dollar in five of student loans comes from these private sources. But at least half of undergraduates who take out private loans are eligible for cheaper federal loans, the institute reports.

Financial-aid officers say the best deterrent to debt is information. And student borrowers appear to be getting very, very little of that.

“A lot of my roommates and friends have no idea about how much debt they’re in,” says James Beck, a senior engineering major at Syracuse.

A study by the Project on Student Debt found that some college and university financial-aid departments don’t publicize their office hours or contact information, use technical language students don’t understand, provide materials only in English while serving more and amore non-native-English speakers, are open only during the days when increasing numbers of students are taking night classes, and put their least experienced employees on the front lines to try to answer student questions.

“You hear people talking about this issue, but what are they doing about it? How are we educating our students to know how to borrow smart and doing what we can to reduce the loan debt?” asks Jason Deitz, assistant director of student financial planning at Alvernia University in Reading, Pa.

“There are many financial-aid officers who agree that there should be one-on-one counseling to explain to students how much they’ll owe, but most of them simply don’t have the staffs to do that,” says Thomas Brock, director of postsecondary education at MDRC, a nonprofit research center created by the Ford Foundation and originally called the Minority Data Resource Center, which is studying these efforts.

Technology and federal regulations seem to be doing more harm than good. Students apply for loans on the same form they apply for grants, which can downplay the high stakes of borrowing. There are also only minimal federal requirements that students receive in-person financial counseling. They can simply read the terms of the loan online, which is where they also sign the master promissory note.

Compare that to the endless, complex process of taking out a mortgage.

“Students will go through the [online] entrance counseling and they’ll fly through it and try to get it done as quickly as possible,” says Deitz. “They’re not reading the fine print. And then they’ll end up saying, ‘I owe what? I have to pay how much?’”

Aiello learned the answer to that question the hard way. She has graduated now and is working as an assistant video editor at a marketing company in Philadelphia. Good thing, too—her college loan repayments come to more than $400 a month, including $195 for just that one private loan she took out as a freshman.

“I really want to get started hacking away at that,” she says. “It’s riding on my back.”