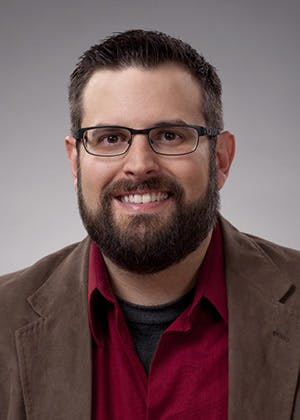 Dr. Todd Pagano was recognized as Outstanding Master’s Universities and Colleges Professor of the Year.

Washington — When Dr. Todd Pagano read the lengthy job description for a chemistry professor position at Rochester Institute of Technology back in 2002, he was thrilled that he met all of the qualifications until he got to the last line.

The candidate, he said, had to know sign language, which Pagano, who was nearing the end of his doctoral studies, didn’t know.

But rather than pass up the teaching position at RIT because he didn’t know how to sign, Pagano took on the challenge of learning to communicate with the deaf.

Administrators at the National Technical Institute for the Deaf at RIT saw his passion and commitment and brought Pagano on board to teach while he became versed in sign language. Within three months, he was teaching his own chemistry course to deaf and hard-of-hearing students without the aid of an interpreter.

Pagano, who went on to establish the Laboratory Science Technology Program at the National Institute for the Deaf, was honored at the National Press Club Thursday as one of four U.S. Professors of the Year. Pagano was recognized as Outstanding Master’s Universities and Colleges Professor of the Year.

Pagano says he takes satisfaction from knowing that he is able to serve as a bridge between deaf and hard-of-hearing students and the world of work in the  field of chemistry, which they might not otherwise be able to enter.

“It was a challenge,” Pagano said of learning sign language.

Pagano’s teaching methods were commended Thursday by a former student who drove all the way from Florida with her family to attend the awards ceremony, despite being pregnant with her third child.

The student, Nelsy Carcamo Ortiz, described Pagano as a dynamic teacher who “has a very powerful way of turning students on to science.”

“As a deaf-hard-of-hearing individual with English as my second language, you can imagine that college was quite intimidating for me,” said Ortiz, who is the first in her family to attend and graduate from college. She is now working on her master’s degree.

“But Dr. Pagano believed in me so much that I began to believe in myself,” Ortiz continued. “He is a person who cares about student success more than anything else.”

Besides engaging and challenging students, Ortiz said, Pagano also entertains them, as well. She cited his “electron dance” as an example.

Pagano said one of the reasons he was able to get the position while he learned sign language is because there is “not a lot” of individuals who are knowledgeable in both chemistry and sign language.

He says he has learned quite a bit from his students, and they have collaboratively come up with new signs for scientific terms that previous lacked a specific sign.

Dr. Gerard Buckley, president of the National Technical Institute for the Deaf, said Pagano’s decision to learn sign language plays a critical role in the institute’s mission. He said Pagano is like an instructor who had to learn a foreign language in order to teach in another country.

“You might have the content knowledge, but you have to have the language and the culture in order to teach,” Buckley said. “That’s quite a person who is willing to do the extra hours outside the classroom,” he said of Pagano, whom he recalls going to all kinds of social functions with deaf and hard-of-hearing students in order to sharpen his sign language skills when he first started out.

The other professors honored Thursday by the Carnegie Foundation and Case were:

Outstanding Baccalaureate Colleges Professor: Christy Price, professor of psychology at Dalton State College, who was described in her bio as a “nationally recognized authority on innovative teaching techniques to engage millennial learners.”

Autar Kaw, professor of mechanical engineering at the University of South Florida, who was recognized as “an engaging instructor who uses a variety of teaching techniques, including social media and learning assessments that are informed by his research to reach, encourage and challenge a diverse student population.”

Martha Kanter, U.S. Under Secretary of Education, said the professors honored Thursday are critical to the Obama Administration’s goal to make the United States have the most competitive and best educated workforce in the world by 2020.

“These professors exhibit not only a knowledge of their subject matter, but a great passion for their teaching and making a difference in the lives of their students,” Lippincott said.