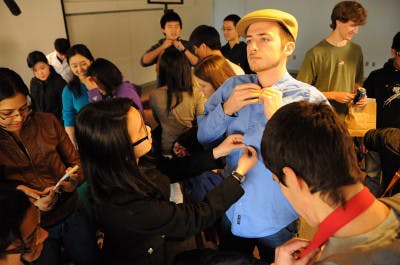 After final exams are over, MIT students will return from their holiday break to experience something different from their usual studies — but almost as important.

It’s the university’s annual Charm School, offering instruction in everything from how to make a first impression to how to dress for work to which bread plate to use.

Other colleges have started teaching students how to make small talk, deal with conflict, show up on time, follow business etiquette, and communicate with co-workers.

These programs may be fun, or even funny, but there’s a serious purpose to them: to give students the kinds of social skills they need to get and keep a job.

“Everybody here is smart,” said Alana Hamlett, who co-directs the Charm School, which began about 20 years ago and is optional for students. But in a tough job market, she said, “this is one additional tool that will give you an edge. The key to being a step ahead is having those interpersonal skills and being able to work a room.”

Although projections by the National Association of Colleges and Employers show that hiring is expected to be up for students finishing college in the new year, the job market remains tight and applicants will need every advantage. Only slightly more than a third of businesses say they plan to recruit this spring.

Employers complain that graduates are increasingly arriving without the kind of interpersonal skills MIT’s Charm School tries to teach. They’re skills many don’t learn at home anymore and that take a back seat in an era of omnipresent electronic communications.

“This is a generation with an average of 241 social media ‘friends,’ but they have trouble communicating in person,” said Arthur Levine, president of the Woodrow Wilson National Fellowship Foundation, who has studied the current crop of students.

Employers increasingly think so, too. More than a third of managers think their youngest hires act less professionally than their predecessors, according to a national survey by the Center for Professional Excellence at York College in Pennsylvania.

“A good resume and a degree only gets you to the table,” says Matthew Randall, the center’s director. “Professional behaviors are what get you a job. And what colleges are trying to do is help these students develop the behaviors that employers want.”

York teaches a workshop for sophomores called “Mastering the Art of Small Talk”; two majors—education and sports management—require their students to take it. It also offers a seminar in taking criticism.

“This generation talks better with their thumbs than face to face,” Randall says.

“Students don’t really know what’s meant by professional dress, whether it’s a young lady wearing a skirt that’s way too short or a young man whose pants aren’t really tailored,” says MIT’s Hamlett. “Most students just roll out of bed in whatever it is they want to wear. There’s this ‘come as you are’ about being a college student.”

Women students in particular, she says, also follow fashion blogs: “So that lends itself to an idea of what they should be wearing, not understanding that what you see on a fashion blog may not exactly be the most appropriate thing to wear to an interview.”

At Wake Forest University’s business school, master’s candidates are required to wear business attire to class and be in the building from 9 a.m. to 5 p.m. If they don’t know what “business attire” means, that will soon be covered, too, by a new program in leadership starting next year that will, among other things, teach them how to dress.

MBA and law students at the University of Iowa learn table manners at an annual “etiquette dinner”—such as where to rest their silverware between courses and on which side of their settings to return their water glasses. Other schools are adding similar programs.

Many students don’t learn this at home because “a lot of them today don’t have parents who know how to navigate these things,” says Aaron McDaniel, himself a young professional and author of The Young Professional’s Guide to the Working World: Savvy Strategies to Get In, Get Ahead, and Rise to the Top, which was published in October.

Smothering baby-boomer parents also have protected their children from the demands of the real world, as opposed to showing them how to survive it, McDaniel says.

“We feel so entitled to everything, because everyone has changed their lives for us,” says McDaniel, a Berkeley graduate who was one of the youngest-ever regional vice presidents at AT&T. “Our parents had our lives at the center of theirs, as opposed to teaching us how things really are. It was all about us, and we expect that to continue.”